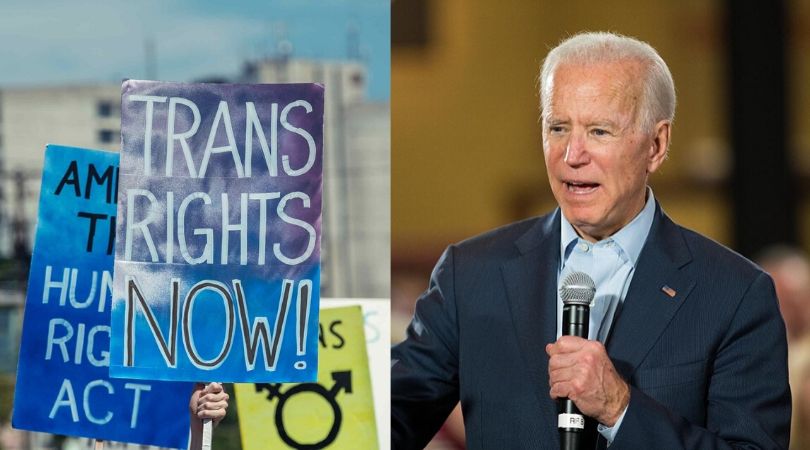 2020 candidate claims there are at least three genders

Democrat presidential candidate Joe Biden seems to be taking a page from Elizabeth Warren's playbook in pandering to the insanity vote, and has provoked a backlash.

Stumping in Iowa a week before the state's Democratic caucus, Biden decided to show his "progressive" chops by proclaiming there is no greater civil rights issue in our era than transgenderism.

"Let's be clear," Biden proclaimed in a tweet, "Transgender equality is the civil rights issue of our time. There is no room for compromise when it comes to basic human rights."

Apparently, "Catholic" Biden sees attempting to change one's own sex as a human right, and that everyone else accept the charade as a civil obligation.

His tweet came one day after the March for Life in Washington, which saw a half-million people marching for the right to life of innocent preborn children, after 65 million have already been killed through abortion. The former vice president's message also came five days after Martin Luther King's birthday, when the nation celebrates the slain civil rights leader and his contribution to civil justice for black Americans.

While President Trump spoke about the "God-given potential" of every preborn child, "Catholic" Biden spoke of the potential to desecrate what God has given.

Transgender equality is the civil rights issue of our time. There is no room for compromise when it comes to basic human rights.

The Twitterverse was not silent.

James Shupe, America's first legal "non-binary" person who has since reclaimed his natural male sex on his license, gave a response that centered on the disastrous impact "transgenderism" has had on society and, in particular, on women and girls.

"Men in women's bathrooms with little girls. Males winning first place in female sports. Males in women's homeless shelters. Male predators being placed in female prisons based on 'feelings' of being a woman," tweeted Shupe. "And Biden calls it the civil rights issue of our time. Women, do you agree?" he asked.

"You just lost my vote," tweeted Tara L. "If all the Dems insist on sacrificing women's and girls' sex-based protections to trans-rights activists, they will lose, and they should lose. Whoever protects sex, not 'gender identity,' in Title IX has my vote."

"What about the basic human rights of non-trans women (real women)?" Naggie asked. "Are we no longer entitled to have our rights protected? Have we now, somehow, become a subspecies?"

"Let's be clear," mocked O.W.L.s via Twitter, "This is an astroturf movement masquerading as a civil rights movement and already hurting women's sex-based spaces, sports and rights."

And Miss S. tweeted, "Let's be clear: you want men who 'feel like a woman' to share the changing room with women and girls. You want to take away women's sex-based rights because it makes trans males feel better. Let's be really clear: you don't care about the safety of women."

Katie Moon, a 22-year-old student who attended the Iowa State Fair, where candidates mingled with voters, asked Biden, "How many genders are there?" Biden looked at her and muttered "at least three." When Katie followed up and asked, "What are they?" he angrily responded, "Don't mess with me, kid!"

Biden then aggressively grabbed her arm and said what sounded like, "By the way, the first one to come out for marriage was me." Presumably, he meant same-sex "marriage." Katie later said, "I was mad — very, very mad that someone would treat me like that."

Indeed, "Catholic" Biden did come out for same-sex "marriage," even before his boss Barack Obama did, in 2012 on Meet the Press, telling the host that he was "absolutely comfortable with ... men marrying men, women marrying women." Skeptics speculate this was an orchestrated confession to pave the way for Obama's "conversion" on the issue.

Biden is currently polling second among all the gender-confused Democratic candidates in Iowa, behind Sen. Bernie Sanders and ahead of Sen. Elizabeth Warren and Mayor Pete Buttigieg.