Use occasion to distort Catholic teaching

NEW YORK (ChurchMilitant.com) - More than 1,000 self-identifying Catholics on the political Left have signed a letter to Cdl. Timothy Dolan of New York to chastise him for speaking with President Trump and thanking him days later for good leadership.

"Your recent phone call with President Trump and appearance on Fox News sends a message that Catholic leaders have aligned themselves with a president who tears apart immigrant families, denies climate change, stokes racial division and supports economic policies that hurt the poor," begins the letter posted online by George Soros-funded Faith in Public Life Action (FPLA) on Friday.

Signed by over 1,000 liberal-minded priests, nuns and laity throughout the country, the letter claims there "is nothing 'pro-life' about Trump's agenda."

"I'm guided by my faith, not partisanship," continues the letter, adding more anti-Trump invective: "But this president's extreme cruelty and basic lack of respect for human dignity must be challenged."

The letter is a response to Dolan's participation in a phone call with President Trump on April 25 and a Fox & Friends appearance on April 27.

Dolan joked that he calls Trump more than his mother.

The phone call with Trump involved 600 Catholics, including Los Angeles Abp. José Gomez, president of the U.S. Conference of Catholic Bishops (USCCB) and Dolan, whom Trump referred to as a "great friend of mine." Dolan joked that he calls Trump more than his mother.

Several days later on Fox & Friends, Dolan thanked Trump for his leadership and the president's sensitivity "to the feelings of the religious community."

In an interview with Jesuit Matthew Malone, editor-in-chief of America Magazine, on the same day the letter was posted, Dolan responded to criticism by saying that the Right blasts him harder than the Left.

"I'm getting much more criticism from those on what you might call the 'Right,' who are saying, 'Why in the world did you work with Sen. Schumer on the sustenance package? ... How can you cooperate with Gov. Cuomo?" he said.

"Now the left wing is snotty about the fact that I was part of a conference call with Catholic leaders, and I just say, 'Look, are we in the sacred enterprise of accompaniment and engagement and dialogue, or are we not?'" Dolan added.

"When you do it, you risk criticism on both sides. When you don't do it, well, then what do we do? We become Amish," he concluded, adding he loves the Amish and wishes "we could be as virtuous and a people of integrity as they are."

Dolan then positioned himself in the middle as one answering Pope Francis' call for "bridge-building."

John Gehring is the Catholic program director at FPLA, which according to the website, "has played an important role in changing the narrative about the role of faith in politics, winning major progressive policy victories and empowering new religious leaders to fight for social justice and the common good."

He is the author of The Francis Effect: A Radical Pope's Challenge to the American Catholic Church and has contributed to The New York Times, The Washington Post, USA Today, Los Angeles Times, CNN, Time, Politico, Crux, Commonweal, America and the National Catholic Reporter.

One report notes Gehring is among various Catholic leaders who once worked within the USCCB and then moved on to promote anti-Catholic positions.

Father Bryan Massingale is a professor of theological and social ethics at Fordham University in New York and the author of Racial Justice and the Catholic Church.

Speaking at a Dignity USA conference in July 2019, Massingale said, "I come to this conversation as a black, gay priest and theologian."

In February, Massingale talked about his participation in the yearly commemoration of Muhammad's first alleged revelation, saying, "Last spring I made a spontaneous decision to observe Ramadan ... Observing Ramadan gave me a deeper appreciation for the Christian season of Lent. Actually, Lent pales in comparison! Catholics have nothing that approaches the rigors of Muslim fasting."

"I look forward to Ramadan this year," he added. "Yet I also wonder how Christians can recover or rehabilitate Lent so that this season becomes a time of ... our collective summons to generous compassion for those who are the targets of fear, hate and indifference."

In a reflection in June 2019 on the "LGBTQ rights movement and Catholic social teaching," Massingale said, "Perhaps Stonewall's lasting legacy is the conviction that all people, regardless of gender identity and sexual expression, are equally human and possess fundamental human rights."

I come to this conversation as a black, gay priest and theologian.

"This is a value shared by Catholic social teaching as its own bedrock conviction," he continued, adding: "This is why many Catholics publicly participate in Pride events and maintain membership in the Church as their faith community wrestles with the implications of that fundamental belief for its relationship with LGBTQ persons."

The Catholic Church actually teaches there are only two sexes created by God and that, while homosexual actions are "gravely disordered," those who suffer from it should be loved and urged to live chastely.

Sister Simone Campbell is the executive director of NETWORK, Advocates for Justice, Inspired by Catholic Sisters. She wrote the "nuns' letter" in support of Obamacare, which some say was critical in the bill's success. President Obama thanked Campbell and invited her to the signing of the bill.

Author of A Nun on the Bus: How All of Us Can Create Hope, Change and Community, Campbell attended the 2016 Democratic National Convention and offered her thoughts on abortion.

"From my perspective," said Campbell, " I don't think it's a good policy to outlaw abortion. I think, rather, let's focus on economic development for women and economic opportunity. That's what really makes the change."

In fact, section 2258 of the Catechism of the Catholic Church teaches that abortion is wrong in that "no one can under any circumstance claim for himself the right directly to destroy an innocent human being."

A government relations specialist for NETWORK, Sr. Quincy Howard also signed the letter. In October 2018, Howard joined protesters against now-Justice Brett Kavanaugh, saying at the time, "He is trying to maintain this veneer of perfection and accomplishment, and that is not the way that you find Jesus. The way you find Jesus is by repenting and admitting the things that you did that you're ashamed of."

I don't think it's a good policy to outlaw abortion. I think, rather, let's focus on economic development for women and economic opportunity.

Stephen Schneck is the executive director of Franciscan Action Network (FAN) and a board member of Catholic Climate Covenant, which was founded in 2006 "to address growing ecological awareness and the need to implement Catholic social teaching on ecology within the U.S. Church."

A press release from the FAN dated Apr. 21, states the organization is "appalled by the latest manifestation of the Trump Administration's xenophobia, making another midnight policy announcement to suspend all immigration into the country. We call on the administration to stop playing politics with the pandemic to advance its shameful agenda." 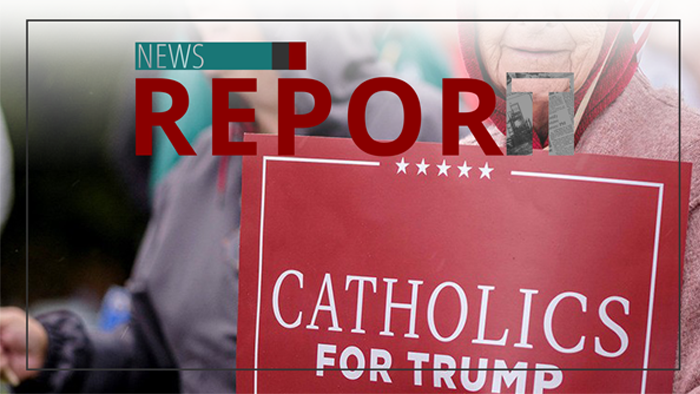