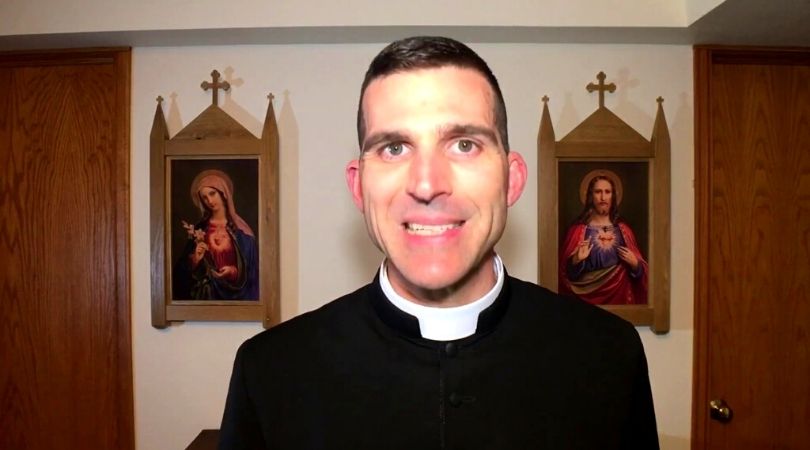 Parishioner: 'It was a hit piece'

These are sentiments of multiple people who attend or are associated with Our Lady of Mount Carmel (OLMC) parish in Littleton, Colorado. They're objecting to a CNA article published on Sept. 2 in which Flynn, they say, hyped off-the-cuff remarks made by Fr. Daniel Nolan that were inadvertently captured on video and posted briefly online Tuesday evening.

The article, they believe, was overblown and lacked much-needed context, which unnecessarily put the priest on the radar of the Denver archdiocese as well as Nolan's own Priestly Fraternity of St. Peter (FSSP).

"It was a hit piece," a parishioner told Church Militant.

At issue are offhand comments Nolan made on Sunday prior to a catechism class that happened to get recorded and were subsequently posted online at 5 p.m. Tuesday. In the videotaped comments, Nolan responded to general questions by parishioners pertaining to the scope of obedience required by laity if an ecclesial or civil authority ordered them not only to wear a mask but possibly to have themselves or their children vaccinated in the future.

It was a hit piece.

CNA did reach out to Nolan, who wasn't able to comment publicly, as well as to OLMC pastor and FSSP member Fr. James Jackson. But Jackson says he was unfamiliar with the situation and was only given a short period of time by CNA on Wednesday to respond.

In a letter to OLMC parishioners Thursday, their FSSP pastor, Jackson, noted CNA's hasty reporting. Jackson relates how a CNA reporter asked him to comment on Nolan's video but gave him little time to look into it:

I hadn't seen the video, and I asked for time to see it, to ask Fr. Nolan about it and to consult my superior and the archdiocese. Basically, the reporter gave a couple of hours to accomplish all this, but I had other things which needed to be attended to, so I didn't give a statement.

The pastor added, "So, the reporter published his article without input from me."

The piece, authorized by Flynn and bearing his name, was titled "Church officials evaluating priest who told Catholics to 'disobey' bishop on mask wearing." Sources tell Church Militant the article makes it seem as if Nolan is already in hot water with the Denver archdiocese (in which the parish is located) and with FSSP superiors administering the parish.

The Vortex: Why Official Catholic Media Can't Be Trusted

But Jackson, who is Nolan's immediate superior, deflates the portrayal that Nolan's remarks were a cause of great concern. Citing the title of the article to parishioners in his letter Thursday, Jackson cut short the notion of a drawn-out investigation into Nolan's remarks, telling them "the evaluation is over."

The CNA article pushed the notion that Nolan's actions were being closely scrutinized by the archdiocese or by his FSSP superiors and some form of punishment would be given. Flynn reported in his Wednesday piece that the archdiocesan spokesman Mark Haas told CNA "the archdiocese would 'begin the process of determining any appropriate next steps.'"

The reporter published his article without input from me.

Referencing this in his letter, Jackson responded, "This is now incorrect." Jackson further revealed that on Wednesday, the same day the article went out, the so-called evaluation had already been concluded:

Yesterday, I spoke at length with the vicar general, Fr. Randy Dollins, about this. He was of good cheer, extremely helpful and supportive. I can't tell you how much I was impressed by him. I consider this [matter] closed, but if you need my help on anything more on this, give me a call.

The only consequence for Nolan's controversial, videotaped remarks is for Nolan to refrain from posting videos online for now.

Some believe the story was picked up by CNA so quickly owing to OLMC parishioner Kevin Jones, who also happens to write for CNA. But when asked Thursday on social media if he had started the story, Jones sidestepped the question.

'It's absolutely not about the masks,' said the source, but about 'vaccines.'

"The decision to run with this wasn't mine," he replied.

His response reflects the fact that Flynn has the final say in what stories to run and when.

After the CNA piece on Nolan came out on Wednesday, Jones tweeted, "My home parish is in the news for an unfortunate and petty act of rebellion against the mask mandate aiming to limit coronavirus spread."

Sources privy to Nolan's impromptu comments say this characterization by Jones and by the CNA article didn't do justice to Nolan's remarks. According to them, Nolan was addressing how obedience to pandemic-related directives is affected by the questionable effectiveness and even potential harm of masks and, more importantly, of vaccines.

"It's absolutely not about the masks," said the source, but about "vaccines."

The source noted that Nolan's concern was not against any and all vaccines but was focused on the past agenda of those pushing this particular vaccine and how that aspect could affect prudence and, in turn, obedience.

The source then delved into the often-expressed principles that underlie Nolan's recorded remarks on obedience. These principles, providing necessary context, were not found in Flynn's report. The source said Nolan has often spoken of a fundamental point — that civil and ecclesial officials can't ever ask a person to violate God's laws or right reason:

A bishop cannot give an order that is egregiously and obviously contrary to right reason. ... If people are convinced that masks are unhealthy ... and everything is pointing in that direction, they cannot issue this order. It's not a valid order to begin with so it's not even a case of disobedience.

Nolan has stated that civil authorities are likewise bound, added the source:

The final question was on how Nolan personally views the related use of authority by Denver's Abp. Samuel Aquila. Nolan believes, according to the source, that "the bishop has been very reasonable."