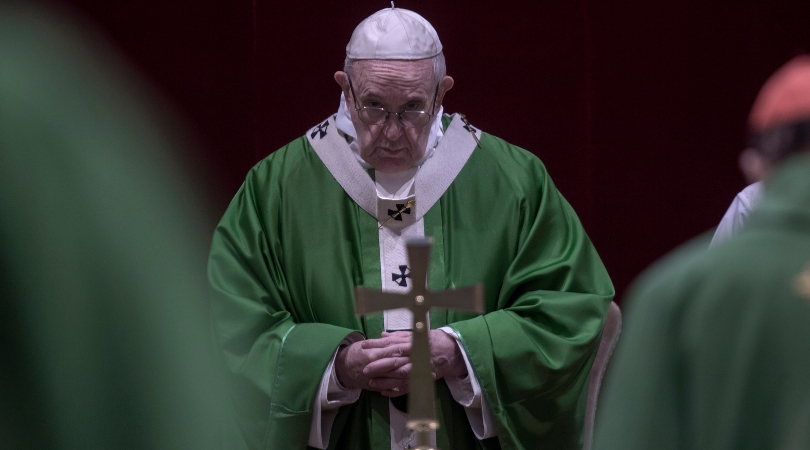 The recent Vatican summit on sex abuse has sparked frustration and outrage among the Catholic faithful throughout the world. Over the course of three days, bishops and cardinals met in the Vatican to discuss the issue of clerical sex abuse of minors. However, the root cause of the abuse, homosexuality in the ranks of the clergy, was a topic not to be discussed.

Giving voice to the frustration of faithful Catholics, The Lepanto Institute published an open letter to Pope Francis outlining a plan for purifying the Church. The letter, addressing the Holy Father, says:

If you wish to reestablish the faith, trust and love of the laity, you are going to have to take strong actions to root out the problem. We want a clear and unambiguous decree that enacts strict penalties … including excommunication and laicization … for any cleric, whether deacon, priest, bishop, archbishop or cardinal, who sexually abuses any other person regardless of age, sex or circumstance, or who is found guilty of engaging in any unnatural sexual behavior.

The letter then calls for Pope Francis to remove all clerics — including cardinals like Cdl. Blase Cupich, Cdl. Kevin Farrell and Cdl. Joseph Tobin — who are "either practicing or promoting homosexuality ... from their positions."

Michael Hichborn, president of The Lepanto Institute, told Church Militant that the laity are "fed up" and that something finally needed to be said.

"This summit on the abuse of children not only did nothing to protect children, but put the abuse of our trust in the clergy on full display," Hichborn said. "Pope Francis appointed the main culprits of abuse to run the summit, who in turn did everything possible to deny the connection between abuse and homosexuality."

Hichborn said that he hopes this open letter will provide a unified front against the homosexual network in the Church.

This summit on the abuse of children not only did nothing to protect children, but put the abuse of our trust in the clergy on full display.

"We have no expectation that Pope Francis will consider our pleas. Our hope is to unify concerned Catholics by stating our expectations and our course of action if those expectations are not met," Hichborn said.

This letter is more of a declaration than a request. United in prayer, specifically the Rosary, we faithful Catholics will and must pray daily for this pope and his cadre of prelates who protect homosexual clergy and abusers. But this does not mean we have to fund them. Canon law requires Catholics to tithe, but it makes no specific claims as to how this tithe is made. So, if Pope Francis won't clean house, we will find ways to provide funding for Holy Mother Church that won't find its way into the coffers of enablers. In the meantime, we will offer our suffering and prayers to the Holy Mother, begging for Her Immaculate Heart to finally triumph over the corruption in the Church.

The full text of the letter is below. To add your name to the letter, go to The Lepanto Institute's original posting of it:

If talk is cheap, then this summit on sexual abuse is worth even less. After three days of talking, the official spokesmen for the summit went to great lengths to claim that homosexuality was not a concern while they deliberately dodged questions from reporters.

Cardinal Cupich said the day before the summit began that while most of the problem is a result of "male on male" sex abuse, "homosexuality itself is not a cause." He says it can be explained as a matter of "opportunity and also a matter of poor training on the part of the people."

Archbishop Scicluna said homosexuality and heterosexuality are "human conditions that we recognize, and that exist, but they aren't something that really predisposes to sin."

And Cardinal Tagle went on a vapid rant about smelling like the sheep, touching the wounds of the victims and seeking healing.

But all of this talk about the sexual abuse of children is NOT going to do a single thing to resolve the problem, especially as you continue to deny what is at the very heart of it. The problem is rampant sexual immorality … especially homosexuality … in the clergy. Period!

Your Holiness, if you wish to reestablish the faith, trust and love of the laity, you are going to have to take strong actions to root out the problem. We want a clear and unambiguous decree that enacts strict penalties … including excommunication and laicization … for any cleric, whether deacon, priest, bishop, archbishop or cardinal, who sexually abuses any other person regardless of age, sex or circumstance, or who is found guilty of engaging in any unnatural sexual behavior.

We want all clerics either practicing or promoting homosexuality to be removed from their positions. We want all of the prelates who enable homosexuals, whether lay or clergy, to be removed from their positions. That means removing individuals like Cardinal Cupich, Cardinal Kasper, Cardinal Schönborn, Cardinal Danneels, Cardinal Marx, Cardinal Tagle, Cardinal Tobin, Cardinal Farrell, Cardinal Dolan, Cardinal Wuerl, Archbishop Scicluna, Bishop McElroy, Bp. Gregory, Bp. Wester, Bp. Malone, Fr. Daniel Horan, Fr. Thomas Reese and Fr. James Martin. And that's just for starters. These men have flouted Church teaching on sexual morality for far too long, and no amount of talking is going to fix the problem of sexual immorality in the Church while they remain in their positions. If you truly seek healing for victims and for the Church, you can start there. But if you keep talking this issue to death while sitting on your hands, then rest assured that while we will continue to pray and sacrifice for you, we will not pay you and we will simply wait for you to pass into eternity and judgement so Our Lady and Our Lord can resolve the matter through our patience and our prayers.