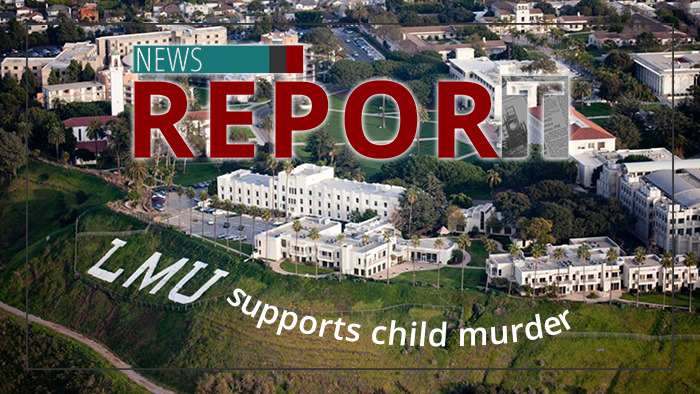 A Jesuit university in California is facing backlash for hosting a fundraiser for Planned Parenthood. Church Militant's Nadia Hazimeh reveals what a student and alumna think about the school's handling of the situation.

Multiple protest groups will be at Loyola Marymount University Friday, just prior to the pro-abortion event. An LMU Catholic group is holding a Rosary rally to counteract the celebration of the largest abortion mill in the United States. But the Catholics may be a little late to the party.

Will Donahue, president of the LMU California College Republicans chapter: "Pro-life students are maybe finally just waking up. But our conservative students have been raising these alarms for a very long time."

The LMU chapter of California College Republicans is also protesting. President Will Donahue is the lead organizer.

Donahue: "We've watched our Catholic heritage go down the drain. This is by far one of the most heinous things this administration has done."

LMU issued a statement Tuesday, claiming school organizations are "independently operating" and that "the fundraiser hosted by [LMU] Women in Politics is not a university-sponsored event." Alumna Samantha Stephenson penned a letter Monday to university president Tim Snyder, asking him to change the recipient of the fundraiser's proceeds.

She does not think LMU's excuse of freedom of speech is fair, since it's not a speaking engagement. This is just a microcosm of how Catholic schools nationwide imitate their secular counterparts as bastions of leftism.

Students are disappointed in President Snyder. Donahue, now a senior, affirmed the school became very progressive and secular after Snyder took over in 2015. President Snyder has not responded to Church Militant's request for comment.