Catholic Pro-Gay Ministry in Baltimore Continues to Cause Scandal

BALTIMORE (ChurchMilitant.com) - A Catholic pro-gay ministry is back in the news and on display at the Baltimore Museum of Art.

A video series titled "The Lost Flock" is being showcased through the month of July highlighting the group LEAD (LGBT Educating and Affirming Diversity), the homosexual outreach headed by Fr. Joseph Muth of St. Matthew Catholic Church in Baltimore, Maryland.

Amazed by the welcoming and inclusive atmosphere of the parish, Eric Kruszewski, producer of the series, wants his seven-part video exhibit to capture the experiences of LEAD members.

"LEAD offers a safe place for the diverse LGBT community to congregate, share, and find comfort amidst a larger church environment that does not fully accept them," he commented.

LEAD marches in the Baltimore gay Pride parade each year carrying the St. Matthew banner, and plans on marching again July 23 and 24. To mark the event, St. Matthew parish is selling gay Pride t-shirts after all weekend Masses in the two weeks before the parade. Actively gay couples are regularly seen in the pews of St. Matthew Church, while Fr. Muth will preach homilies on the need to include gays and lesbians in the sacramental life of the Church.

A lesbian "married" couple is showcased in Kruszewski's video series, which follows their journey coming out at St. Matthew parish and highlights their 2015 marriage.

"I was a nun for eight years," Vania Christian Dos Passos remarks. "LEAD is a place where you can be yourself, where I celebrate my identity."

"People think it's incompatible to be gay and Catholic," her partner Rachel comments. "There's a lot of Catholics out there that do support gay marriage and LGBT equality, and when they find out about St. Matthew's, they are drawn to it."

The fifth segment of Kruszewski's video series highlights John and Michael Sawyer, another "married" same-sex couple at St. Matthew with an adopted baby girl. "It's very difficult to adopt as a same-sex couple," one of the partners says. "We wanted to move to Maryland ... because we felt we could adopt here successfully."

"The kind of support St. Matthew has given us has been tremendous," he continues, "tremendous in the sense of a place where we can go and honor our relationship with each other."

In 2014, a concerned member of the faithful contacted Abp. Lori expressing his concerns over LEAD. He sent a series of screen shots of messages posted by members and leaders of LEAD on its official Facebook page, including photos promoting same-sex "marriage" and comments by gay "spouses" complaining about Church teaching on homosexuality and admitting they are defiantly receiving Holy Communion in spite of requests from a priest at their parish in Maine that they refrain. Other posts include celebration of a schismatic Church's ordination of a transgender priest (biologically a woman).

A quick search of the site by ChurchMilitant.com revealed multiple shares of New Ways Ministry articles (a dissident pro-homosexual group whose co-founder has been censured by the Vatican), as well as including a celebratory post hailing the Supreme Court's 2015 ruling legalizing same-sex "marriage" accompanied by the text ‪"#‎LoveWins‬ AMEN!!" One 2015 post highlights notorious Holy Redeemer Church in San Francisco, with the status update: "Looks like St. Matthew's has some competition for being the gayest Catholic parish."

In response to the documentation of LEAD's dissent, Lori failed to condemn the group or specify what steps he is taking to ensure it will conform to Church teaching. 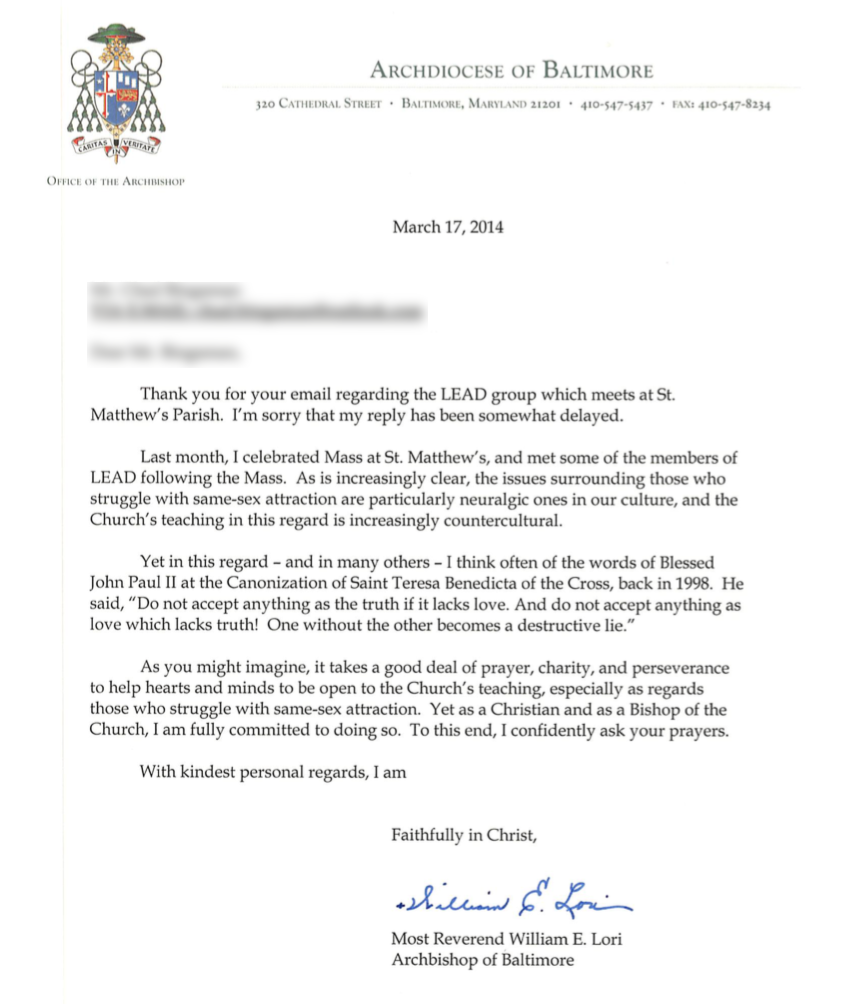 Several years ago, Cdl. Timothy Dolan of New York forbade the parishioners of pro-gay St. Francis of Assisi Church to march under its own banner in the city's annual gay pride parade. Parishioners then chose to march with their banner turned backwards so that the plain white background showed on the front. No such ban, however, has been imposed on members of St. Matthew parish in Baltimore, which marches openly carrying the parish banner in each year's gay Pride parade, with a bullhorn even announcing the church's presence at the pro-homosexual event.

ChurchMilitant.com contacted Abp. Lori for comment, but his secretary informed us he is on vacation. We reached out to the communications director, Sean Kane, but as of press time have received no response.

The faithful can contact Abp. William Lori with their concerns here: archbishop@archbalt.org.