From 2013 to 2018, CRS helped spread contraception to rural women in Madagascar

Catholic Relief Services (CRS) is currently in the middle of a national fundraising campaign, and Catholics all around the country have been contacting The Lepanto Institute asking if CRS is still involved in the promotion of contraception. Sadly, the answer is a resounding "yes."

Last year, we reported that CRS is a dues-paying member ($56,000 per year) of an organization called InterAction, which actively lobbies Congress for the expansion of contraception and the end of the Mexico City policy. Last week, we reported how CRS Executive Vice President William O'Keefe testified before Congress to request nearly $9 billion for USAID, PEPFAR and the Global Fund, which comprise the largest distributors of contraception and condoms throughout the world. 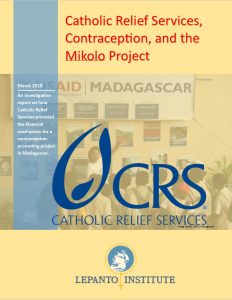 Our latest report on a CRS project (which can be read in full here) shows that from 2013–2018, Catholic Relief Services participated in a project which had the stated objective of spreading contraception to vulnerable women living in poverty in rural areas of Madagascar.

CRS's role in this project was to create a self-sustaining financial mechanism that would provide funding to Community Health Volunteers, whose job (among other things) it was to teach women all about contraception and to sell them various pills and devices.

The USAID Mikolo Project, which ran from August 2013 to July 2018, was a continuation of another project in Madagascar called SanteNet2. At the close of SanteNet2 in March of 2013, USAID noticed that its efforts to spread contraception through Community Health Volunteers was not achieving the level of independent sustainability it had hoped.

In January of 2013, USAID conducted an "Assessment of Community Health Volunteer Program Functionality in Madagascar" wherein it sought "how to finance the CHV program to make it sustainable." The report said:

Recommendations included determining how to finance the CHV program to make it sustainable. One representative called for a line item in the Government budget at decentralized levels to cover CHV services. Another said that some FP services were free at health centers but that CHVs had to ask for a fee to recoup the costs of medicines and supplies, though the service was free. This particularly applied with medications that were purchased through the community. Poverty in remote areas precluded asking for contributions from the communities.

Analamanga's community representatives were concerned about stimulating and sustaining CHVs' motivation. They acknowledged the efforts CHV had to make and cited a need for financial incentives. One representative explained that the work interfered with a CHV's personal (especially marital) life, since many were approached at night, especially for MNCH emergencies. In one case, a CHV's husband opposed his wife's CHV activity due to the frequent disruptions. Financial incentives, e.g., compensation for travel expenses, could help retain CHVs. Providing resources to communities to organize incentives was suggested.

The answer to this problem of providing incentives for CHVs to continue their work in the community (and away from their homes and farm work) while making sure the project was self-sustaining (as in, not reliant upon outside funding) came in the form of Savings and Internal Lending Communities (SILC).

The most common financial incentives across all interviewed CHWs included per diem for attending trainings and meetings, user fees from the sale of medicines and commodities, performance-based financing (PBF) incentives, and referral payments for FP [family planning] services. Some CHWs were also involved in program-supported savings and internal lending communities (SILCs) and income generating activities, while others received free enrollement in community health insurance schemes.

There are two basic elements to the project which must be understood in order to grasp the problem: Community Health Volunteers (CHV) and their role in promoting contraception; Savings and Internal Lending Communities (SILC) and their role in financing CHVs.