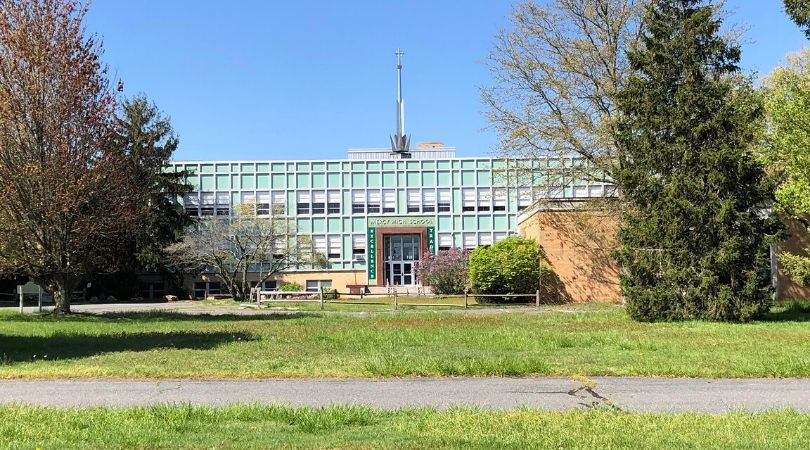 ROCKVILLE CENTRE, N.Y. (ChurchMilitant.com) - It was May 4 when Catholics in the diocese of Rockville Centre learned that Bp. John Oliver Barres had sold one of their Catholic schools to an abortion provider. They did not find out about the $14 million deal from the diocese, but from a local newspaper.

There has been no direct statement from the diocese on the deal, but diocesan spokesman Sean Dolan declared through the hospital's website that repurposing the school to provide greater healthcare on the East End of Long Island would be "a great tribute to Venerable Catherine McCauley, the [foundress] of the Sisters of Mercy." Mr. Dolan is wrong — if this is the sort of honor Sr. Mary Catherine is likely to receive as she progresses to canonization, she won't want it.

The problem lies not in selling the school or its property. Bishop Barres closed Bishop McGann-Mercy Diocesan High School, in Riverhead, New York, in June 2018. The merits of this decision are debatable, but the school was unquestionably in debt and had only a haphazard approach to its own revitalization.

Among other factors, the school's location itself may have led to a sense of complacency. One senior member of the administration once related a conversation he had had with a colleague based elsewhere: pointing to the school on a map, far on the East End of Long Island, his counterpart told him, "You're all alone out there. They'll never close you!"

Indeed, the school was the only Catholic high school in the eastern area of the diocese, covering some 700 square miles on its own; some students commuted from as far as Montauk, 45 miles further east. When it became clear that McGann-Mercy was set to close, it was a devastating loss for families committed to Catholic education.

The school was in a rough state, but it was their school, and they loved it. Some students made the journey to the next-nearest Catholic high school, some 42 miles west of McGann-Mercy, but most filtered out into the public school system. This was all terribly sad to witness, but Bp. Barres's decision to close the school was nevertheless understandable.

You're all alone out there. They'll never close you!

Far different is the decision to sell the school to Peconic Bay Medical Center (PBMC). Growing by leaps and bounds over the past decades and now desperate for space, it makes sense that the hospital would look to expand into the school's 24 acres, immediately adjacent.

Bishop Barres has already completed the deal, and as of this writing, the school's signs have been changed and its contents are being thrown into dumpsters — but it is immutable that the Church simply cannot sell to PBMC. Though the hospital does not perform abortions on demand, it does terminate pregnancies in situations deemed emergencies. This itself is enough to bar the bishop from selling the school to the hospital, but when one considers that PBMC stands not on its own but is part of a network — Northwell Health — then the sale really becomes morally impossible.

For instance, while PBMC performs abortions rarely and does not advertise it, Northwell Health as a whole is unabashed when it comes to ending human life in the womb.

In a May 2019 Healthline article, Dr. Mitchell Kramer of Northwell Health’s Huntington Hospital is cited in support of claims that abortion is safer than giving birth. He explains the differences between chemical and physical abortion, while referring to the child as "the pregnancy," as though she were menstrual debris and not human.

To make matters worse, it is not as though Dr. Kramer's comments to Healthline were off-the-cuff or under-the-radar. Northwell Health made the article part of its public relations platform, featuring it through their newsroom.

This is the sort of organization with which Bp. Barres has struck a deal. Not only does it fly in the face of Church teachings on the sanctity of human life and unsettle the Catholic conscience, it also directly contradicts a prior decision by Bp. Barres's own predecessor, Bp. William Murphy.

Bishop Barres should have learned from his forebear.

During the school’s second-to-last administration, Peconic Bay Medical Center — then still a community hospital and not yet part of the Northwell Health Network — approached the school about one of its clinics possibly tapping into the school's sewage system. This arrangement would have generated a substantial amount of money for the school. The temptation was obviously great — what school administrator would not want more money in the budget every year?

When Bp. Murphy learned of the potential deal, however, he forbade the school from contracting with the hospital, refusing the money on the grounds that some of the wastewater from the clinic in question could potentially include human remains from aborted children.

Even the potential of profiting from procedures which willfully ended human life was enough for Bp. Murphy to prevent this deal from going forward. The Church's timeless teaching on the sanctity of human life, forever dignified by the Incarnation of Christ, rightly came before the allure of dollar signs. Bishop Barres should have learned from his forebear.

So what can be done? What options are available to Rockville Centre Catholics? I can only suggest that no one give even one single penny to the diocese — its parishes, its appeals, even its schools — as long as John Oliver Barres remains bishop. We must starve the diocese. It is 1510 all over again: the bishops will only ever understand red ink.

Meanwhile, one may suggest that the $14 million comes at the right time, to help the diocese stay afloat and keep its employees paid during the current crisis. I can only respond that this deal is immoral and even sacrilegious. Keeping the budget alive and well in this way demands that we contradict our belief that human life is everywhere and always sacred, even when compared to cash. Only Judas would think this a fair trade.

Bishop Barres, this money costs too much.