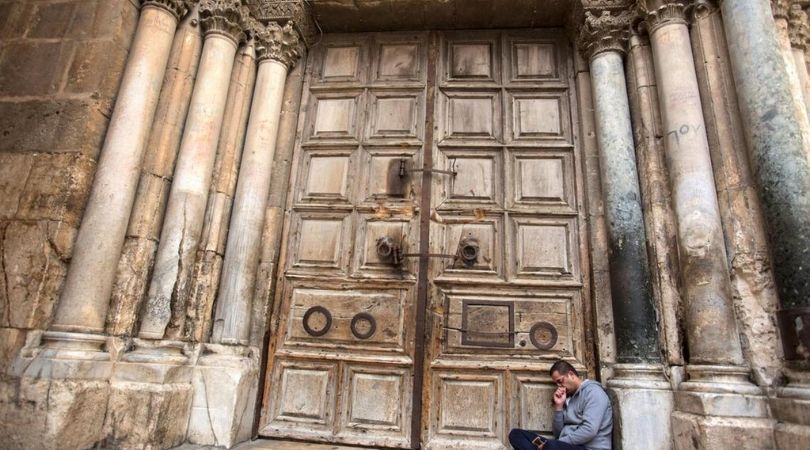 Right to receive outside of Mass left unsaid

As of March 18, all United States dioceses canceled public Masses.

Detroit Archbishop Allen Vigneron, on the other hand, went one incredible step further. After announcing that the holding of funerals, weddings, and baptisms are "at the discretion of the pastor," he decreed: "Holy Communion, except as Viaticum, will not be distributed to the faithful at any liturgy during this time."

Bishop Thomas Paprocki of the diocese of Springfield, Illinois, going online to announce and explain his decision to cancel Mass, is encouraging the faithful to "fast" from receiving Holy Communion.

Bottom line: The vast majority of Catholics have been led to believe that, until public Masses are restored, they can no longer receive Christ truly present in the Most Holy Eucharist.

They have been misled.

In a press release issued on March 16, 2020, the archdiocese of St. Louis announced:

Our churches will remain open for prayer and confessions. Holy Communion may be distributed outside of Mass at times determined by the pastor; however, all ministers — ordinary and extraordinary — need to be in good health. Parish priests will make the decisions regarding available times for prayer and sacraments.

Even Bp. Michael F. Olson of the diocese of Forth Worth, Texas, with whom Church Militant has sparred in the past, in a pastoral letter he issued on March 18, 2020, decreed:

In this cacophony of discordant voices and episcopal decrees, the Code of Canon Law of the Catholic Church (can. 912) expressly states the right of every Catholic in good standing to receive Holy Communion: "Any baptized person not prohibited by law can and must be admitted to Holy Communion."

The law of the Church spells out the exact circumstances when a Catholic is prohibited from receiving Holy Communion. They are set out in the well-known canon 915: "Those who have been excommunicated or interdicted after the imposition or declaration of the penalty and others obstinately persevering in manifest grave sin are not to be admitted to Holy Communion."

The key term here is "law." Unless a Catholic is prohibited by the law — not just personal decision of the bishop — he has the right to receive Holy Communion. Were distribution of Holy Communion outside of Mass be denied to any faithful based on him not dying or being sick, that would be a gross violation of one's strict liturgical and canonical rights.

Canon 918 thereafter sets forth in stone the right of a faithful Catholic to receive Holy Communion outside of the celebration of public Mass: "It is highly recommended that the faithful receive Holy Communion during the eucharistic celebration itself. It is to be administered outside the Mass, however, to those who request it for a just cause, with the liturgical rites being observed."

It is the opinion of this author, a licensed canonist, that if a diocesan bishop has "canceled public Masses" in his diocese, the absence of access on the part of a Catholic who otherwise meets all of the conditions to receive Holy Communion during a Mass open to the public, by that reason of the bishop’s cancellation has the "just cause" required to ask for and receive Holy Communion outside of Mass. "Just" cause in canon law does not mean "grave" cause. The common doctrine of canonists is that it means a "reasonable" cause.

The Catholic Church officially recognizes the right of the faithful in good standing with the Church to receive Holy Communion extra Missam, outside the celebration of the Eucharistic Sacrifice. This right was confirmed in the decree issued by the Sacred Congregation for Divine Worship confirming on June 21, 1973, titled, Holy Communion and Worship of the Eucharist Outside Mass (Eucharistiae Sacramentum, Prot. N. 900/33, AAS 65 (1973) 610. Citing a previous instruction entitled Eucharisticum Mysterium, no. 33a, AAS 59 (1967) 559-60, the Sacred Congregation confirmed:

14. Priests, however, are not to refuse to give communion to the faithful who ask for it even outside Mass. In fact, it is proper that those who are prevented from being present at the community's celebration should be refreshed with the Eucharist. ... .

18. The place where communion outside Mass is ordinarily given is a church or oratory in which the Eucharist is regularly celebrated or reserved or a church, oratory, or other place where the local community regularly gathers for the liturgical assembly on Sundays or other days. Communion may be given, however, in other places, including private homes, when it is a question of the sick, prisoners or others who cannot leave the place without danger or serious difficulty.

What is the "liturgical rite" to be observed in this case? A specific set of rubrics or "rite" have been promulgated by the Holy See safeguarding the right of the Catholic to receive Holy Communion. The rite exists in both the Ordinary and Extraordinary Forms.

Unless a Catholic is prohibited by the law — not just personal decision of the bishop — he has the right to receive Holy Communion.

In the Ordinary Form, the liturgical rite is found in Holy Communion Outside of Mass, first published in 1973.

Why are the bishops en masse across the United States not informing their faithful of their right to receive Holy Communion outside of Mass on an individual basis, or in a group setting observing state-recommended or ordered "social distancing" criteria?

Instead of bishops banning the distribution of Holy Communion to the faithful, or encouraging the faithful "to focus" on spiritual communion or even "to fast" from receiving Our Lord in the Most Blessed Sacrament of the Holy Eucharist, all bishops have a duty to clarify to their faithful that no one needs to be deprived of Holy Communion — that the Church cannot and will not withhold Holy Communion from any Catholic who is properly disposed.

If a priest and a faithful mutually agree for distribution of Holy Communion to be scheduled outside of Mass, and both take needed safeguards, there is no valid reason canonically for distribution to be denied.

Finally, even if someone is infected or dying with COVID-19, a priest or bishop has no canonical right based on that fact alone to deny distribution of Holy Communion outside of Mass, something that we hear is currently happening in some parts of Europe. The norm of can. 915 is very clear.

Bishops and priests need to step up to the plate and fulfill the solemn, most important mission confided to them upon their ordination: the salvation of souls through the administration of the sacraments, even if it might mean their own death in the process. Such is the nature of leaving "all behind" and following Him Who called them. Mark 8:34-36: "Si quis vult post me sequi deneget se ipsum et tollat crucem suam et sequatur me qui enim voluerit animam suam salvam facere perdet eam qui autem perdiderit animam suam propter me et evangelium salvam eam faciet." [If any man will follow me, let him deny himself, and take up his cross, and follow me. For whosoever will save his life, shall lose it; and whosoever shall lose his life for my sake and the gospel, shall save it."]

Any Catholic who is denied the right to receive Holy Communion outside of Mass may contact Church Militant's Resistance arm at contact@CM-resistance.com.