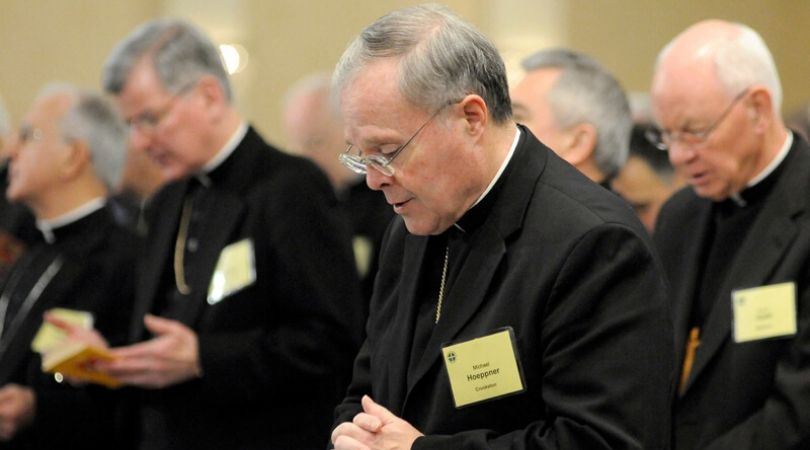 CROOKSTON, Minn. (ChurchMilitant.com) -  A group of faithful Catholics in Minnesota are demanding that their bishop step down.

Launching a petition to demand the resignation of Bp. Michael Hoeppner of the diocese of Crookston, the document will be submitted to Cdl. Sean O'Malley, president of the Vatican's Pontifical Commission for the Protection of Minors.

The group cites Hoeppner's negligence, inaction and mishandling of sexual abuse and child protection, and believe he has failed in his duty to keeping minors in his diocese safe.

Hoeppner has been in the public eye for allegations of sexual abuse cover-up, extensively reported by Church Militant. He has the distinction of being the first bishop in the world to be investigated under the new abuse guidelines set forth by Pope Francis earlier this year.

This Bishop resign for being a silent accomplice in these crimes.

"Just as clergy must resign when found guilty of sexual crimes and sins perpetrated under the guise of holiness and authority, so must this Bishop resign for being a silent accomplice in these crimes and sins committed by clergy in the Diocese of Crookston," the petition begins.

"By this Bishop's inaction, deceit, and indifference he has placed our youth in danger of becoming the next dehumanizing statistic in the Church's sexual abuse and misconduct crisis," it continues. "This Bishop remains stubbornly indignant and seemingly unaware of his complete loss of credibility among the Catholics in the Diocese of Crookston."

The document claims that until a "more trustworthy leader is chosen," for the diocese, then the community "will continue to suffer real spiritual, social, and financial damages."

The petition is seen as an effort to prompt Church officials to do the right thing after numerous missteps by the bishop.

Ron Vasek, former candidate for the diaconate, whose son is a priest in the diocese of Crookston, is suing Hoeppner for alleged extortion and threats to keep him from revealing what he knew from his own past experience of sexual abuse by a priest, Msgr. Roger Grundhaus.

Grundhaus has since retired from active ministry. Vasek says that in the 1970s, when he was 16 years old, Grundhaus supplied him with alcohol and sexually assaulted him. In 2012, while preparing to become a deacon, Vasek told Hoepper of the assault. Instead of Hoeppner consoling Vasek and seeking more information, the bishop reportedly ordered him to keep quiet, threatening to punish his son.

At a press conference in St. Paul, Vasek was represented by Minnesota attorney Jeff Anderson, who specializes in clerical abuse cases. Their aim was to expose what they allege is the history of Hoeppner's protection of priests credibly accused of sexual abuse. Hoeppner and the diocese was eventually sued, forcing a setlement of $5 million to be dispersed among its assault victims.

Anderson began the conference by directing his words to Pope Francis, demanding the immediate removal of Hoeppner as well as that of Bp. Richard Malone of the diocese of Buffalo, who has since resigned for his role in sexual abuse cover-up.

Both bishops, Anderson claimed, "have been engaged and are engaging in a dangerous practice of deceit, deception, concealment of crimes by predators and crimes in which they are both complicit."

Anderson played excerpts from Hoeppner's Oct. 2018 deposition. In it the bishop was directly challenged over allegations that he covered up for multiple priests credibly accused of sexual abuse. This included Vasek's alleged abuser, Grundhaus.

Hoeppner was seen by many as dodging Anderson's questions. When Anderson pressed Hoeppner on the Fr. Patrick Sullivan case, removed from ministry over reports of "boundary issues" and later reinstated into ministry with the bishop's approval, Hoepper seemed to dismiss the question with a standard cliché.

Hoeppner said, "We take all things into consideration. We make a determination to put the man back into ministry. That's what was done."

In 2012, Hoeppner signed a letter confirming Grunhaus' fitness for ministry: "He is a person of good moral character and reputation," he wrote at the time. "I know of nothing which would in any way limit or disqualify him from his ministry. I am unaware of anything in his background which would render him unsuitable for work with minor children."