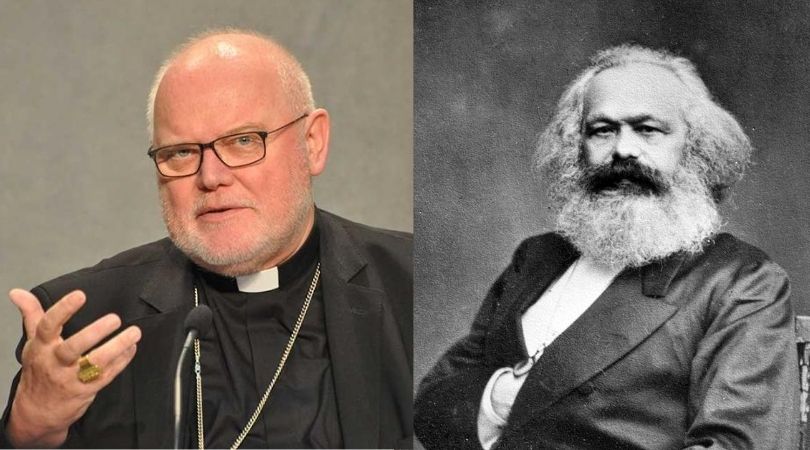 MUNICH (ChurchMilitant.com) - The German Bishops' Conference is facing backlash for a post about Karl Marx.

On Tuesday last week, the conference shared a photo of Cdl. Reinhard Marx posing in front of a statue of communism's forefather.

Tuesday's post said the cardinal "appreciates" Karl Marx "as a great thinker," and stopped by the statue in Trier during a visit there the week prior.

There was backlash to the post on social media, with many Catholics slamming the German bishops for calling Karl Marx a "great thinker."

Commenters called the photo-op "despicable," "cringe" and a "shame," or suggested the cardinal is "krank im kopf" — "sick in the head."

One of the comments, from a German conservative, asked rhetorically, "And Karl Marx is a role model, huh? So is socialism, that has cost millions of people worldwide?"

"A mockery to all victims of socialism!" said one commenter in German. "Mr. Cardinal Marx should be ashamed of himself!"

Other commenters said the photo-op confirmed them in their decision to leave the Catholic Church.

Another user remarked, "Ah, the statue donated by China. Marx, the father of an ideology that has cost many, many people their lives."

One young man in Germany wrote what appears to be a threat to leave the Catholic Church, saying, "It's about time I left the church too. That's 90 euros a month that I can invest better than in communist sympathizers."

This appears to be referencing the Kirchensteuer or "church-tax" — a policy in Germany where a person's tithe to his church or synagogue is taken out of his paycheck alongside taxes.

Other commenters said the photo-op confirmed them in their decision to leave the Catholic Church.

"Can't leave the church as often as I want," one person wrote.

The cardinal claimed the father of communism — though an atheist who despised the Church — is an important figure to study.

Some speculated as to why Cdl. Marx's pectoral cross appeared to be tucked into his chest pocket for the photo.

Despite the flurry of negative comments on social media, the German Bishops' Conference posted a number of links showing how Cdl. Marx has spoken fondly of Karl Marx over the years.

In April 2018, Cdl. Marx trumpeted Karl Marx for what his writings said about "human rights."

Also that month, the cardinal claimed the father of communism — though an atheist who despised the Church — is an important figure to study in Catholic social teaching:

The Catholic social doctrine has worked intensively on Marx, hence the words of Oswald von Nell-Breuning: "We all stand on the shoulders of Karl Marx." That is not to say that he is a "Church Father." But his position has always been a point of discussion for Catholic social teaching. Mostly in a critical dismissal, but also in the question: What does he actually mean, what drives this man? Is his analysis of capitalism correct? And what can we say about it?

The cardinal went on to argue, "He is an astute analyst of capitalism."

But Cdl. Marx was willing to point to faults in Karl Marx. He said, for instance, "For Marx, it is only about the human species. He hardly looks at the individual. For us Christians, the person is central."

In September 2017, the cardinal wrote fondly of Karl Marx on the 150th anniversary of the publication of Das Kapital — an 1867 book in which Marx criticized capitalism and private profit.