Vatican Formally Says No to Intercommunion for Protestants

VATICAN CITY (ChurchMilitant.com) - The Vatican's doctrinal watchdog is closing the door on intercommunion for Protestant spouses, with the support of Pope Francis.

On Monday, German Catholic news site Kath.net published exclusive quotes from the letter, dated May 25. Head of the Congregation for the Doctrine of the Faith (CDF), Abp. Luis F. Ladaria, wrote, "The Holy Father has therefore come to the conclusion that the document [by the German bishops' conference about intercommunion] is not ready for publication."

The German bishops' conference caused controversy earlier this year when it proposed allowing Protestants married to Catholics to receive Holy Communion at Mass. Canon 844 only allows non-Catholic baptized Christians to receive Catholic sacraments under "grave necessity," such as "danger of death" — and even then, they must profess Catholic belief about the sacraments.

The German bishops, led by Cdl. Reinhard Marx, argued that Protestant spouses should be allowed to take Communion at Catholic Mass after "careful examination" of conscience and professing Catholic belief, but without fully entering the Catholic Church. Marx and others argue allowing Protestant spouses to receive Catholic Eucharist could be a "necessity" for saving their marriages.

Inside sources have been saying since April that the CDF was opposed to the German intercommunion idea. But in a closed-door meeting with Pope Francis last month, the Holy Father declined to issue a decision, instead asking that the bishops come to an "amicable" consensus themselves. He received widespread criticism from various bishops and cardinals for his failure to act.

First, the letter says that the issue of who can receive Holy Communion is relevant to the entire Church, not just the Church in Germany. This is in contrast with Cdl. Marx's now-infamous quip about liturgical debates: "We are not a subsidiary of Rome."

The second reason provided is that the intercommunion proposal has harmful universal implications for "ecumenical relations with other churches and ecclesial communities."

The topic concerns the law of the church, especially the interpretation of Canon 844. Because there are unanswered questions in some parts of the Church, the competent dicastery of the Holy See has already been commissioned to clarify these issues promptly at the world church level. In particular, it seems appropriate to leave the verdict on the existence of an "urgent and serious plight" to the diocesan bishop.

This statement from Abp. Ladaria reinforces what is written in Canon 844, which gives "danger of death" as an example of "grave necessity" and leaves the decision in all cases besides danger of death to "the judgment of the diocesan bishop or conference of bishops."

But the CDF's top prelate emphasized that the question of "grave necessity" should be left up to individual bishops deciding on individual cases, rather than a sweeping judgment from a bishops' conference.

Canon law also requires that non-Catholics wishing to receive Catholic sacraments under dire circumstances must "manifest Catholic faith in respect to these sacraments" and be "properly disposed." (Presumably, the latter means living in a state of grace.)

The Holy Father has therefore come to the conclusion that the document is not ready for publication.

The phrase "ecclesial communities" used in Abp. Ladaria's letter is a common technical term for Protestant sects because they do not have valid Eucharist nor Apostolic Succession.

Ines Angeli Murzaku, a professor in Church history, argued in an op-ed Sunday for Catholic World Report that intercommunion for Protestants could threaten Catholic-Orthodox relations:

If intercommunion with Lutherans or other Protestants was ever approved (which I strongly doubt), it would not only be "sacrilegious" and an "outrage" against the sacrament of the Eucharist, as Cardinal Sarah has put it, but would also cause a trauma in modern ecumenism and damage Catholic-Orthodox relations, something the Catholic Church would avoid at any cost.

Catholics and the Eastern Orthodox, Murzaku reasons, have far more in common theologically than Catholics and Protestants. To admit Protestants to Holy Communion while leaving the Eastern Orthodox in schism would contradict Catholic ecclesiology, she argues, and the Orthodox patriarchs might take it as an insult, undermining ongoing efforts to bring the Orthodox churches into full union with the Catholic Church.

The topic concerns the law of the church, especially the interpretation of Canon 844.

Bishops around the world have argued about the German intercommunion proposal, with many speaking out against it.

Former CDF prefect Cdl. Gerhard Müller slammed the idea of intercommunion, calling it indicative of a loss of faith in the Eucharist. Ottawa's Abp. Terrence Prendergast and Philadelphia's Abp. Charles Chaput have both weighed in, opposing the idea. Likewise, Cdl. Willem Eijk from the Netherlands voiced his opposition to the German intercommunion proposal.

Cardinal Robert Sarah, Prefect of the Congregation for Divine Worship, wrote in February that giving Holy Communion to non-Catholics is "sacrilegious" and an "outrage." The cardinal wrote this in a preface to a new book about reception of Holy Communion on the hand vs. on the tongue. 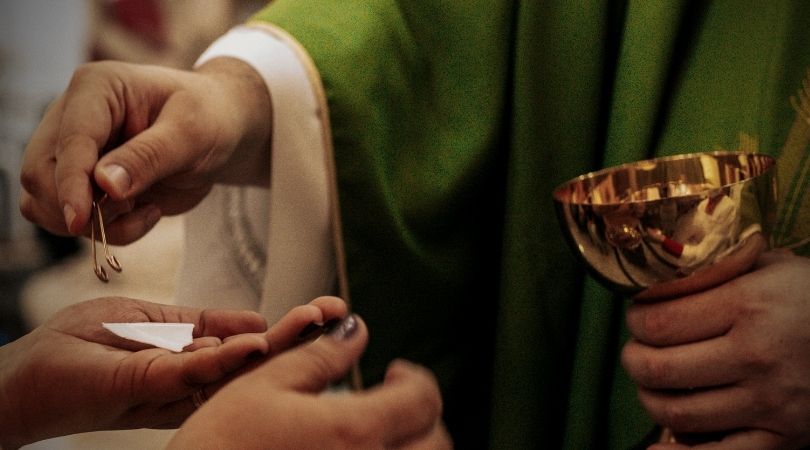