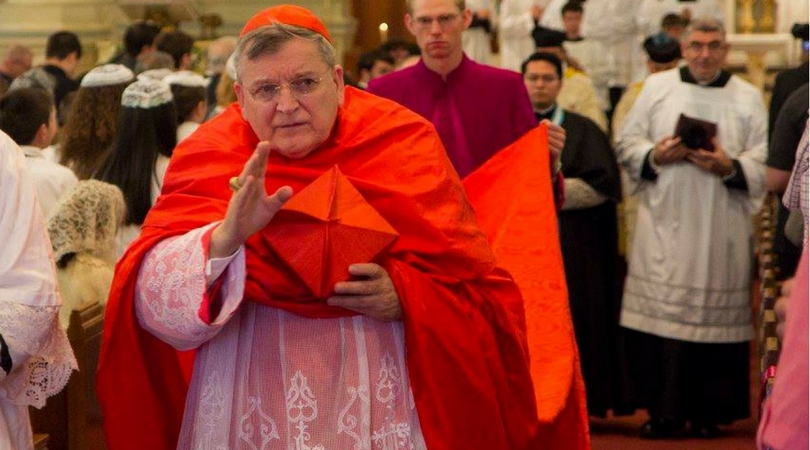 Among highest-ranked prelates to make such a claim

MEDFORD, Ore. (ChurchMilitant.com) - The former head of the Vatican's highest court is saying the Society of St. Pius X (SSPX) is "in schism."

In newly released audio, Cdl. Raymond Burke, former head of the Apostolic Signatura, made the remarks at the Sacred Liturgy conference in Medford, Oregon in July. In answer to a question about attending liturgies offered by the priestly group, Burke said:

Burke is among the highest-ranking prelates in the Church to state that the SSPX is in schism. Cardinal Gerhard Mueller, former prefect of the Congregation for the Doctrine of the Faith, has also said the SSPX is in schism, in comments made in 2013 to the Italian press:

The canonical excommunication of the bishops for their illegal ordinations was revoked, but a de facto sacramental excommunication remains for their schism; they put themselves out of communion with the Church. After that we are not closing the door and never will, but we are inviting them to be reconciled. But they too must change their attitude, accept the conditions of the Catholic Church, and the Supreme Pontiff as the definitive criterion for membership.

The 69-year-old cardinal acknowledged the confusion that has ensued since Pope Francis granted an indult to the SSPX to hear confessions and, more recently, to officiate at weddings (on condition that no diocesan priests are available and the local bishop approves). Both overtures were made for the benefit of the faithful, and formally changed nothing regarding the official status of the SSPX, whose priests remain suspended a divinis and are therefore forbidden to offer the other sacraments.

"[T]here is no canonical explanation for it, and it is simply an anomaly," Burke remarked on the recent indults. "They're no longer excommunicated, but they're also not in regular communion with the Catholic Church."

In Pope Benedict's 2009 letter addressing the remission of the excommunications of the four founding bishops of the SSPX, he confirmed that "until the doctrinal questions are clarified, the Society has no canonical status in the Church, and its ministers — even though they have been freed of the ecclesiastical penalty — do not legitimately exercise any ministry in the Church."

In light of this status, which has not formally changed, Burke warned the faithful it was best to avoid SSPX liturgies.

I don't think it's a good sign to receive sacraments in the Priestly Society of St. Pius X because that's not helping them to, first of all, the sacraments are not celebrated licitly. They're valid; there's no question about it if the priests are validly ordained, but ... it's a countersign to the communion of the Church. Instead we should be encouraging the members of the Priestly Society of St. Pius X to be reconciled with the Church.

Although the Holy See has been in talks on and off with the SSPX since the illicit 1988 consecrations, no agreement has ever been reached between the two parties. Questions of doctrine in the documents of Vatican II are often the sticking point preventing the priestly society from signing any agreement.

SSPX Superior General Bp. Bernard Fellay was among the signatories of the Filial Correction submitted to the pope September 23 asking him to clarify seven points of alleged heresy in Amoris Laetitia, the apostolic exhortation on marriage and the family that has led to worldwide confusion and varying interpretations.