Cdl. Burke: Synod Is Apostasy and Attack on Christ’s Lordship 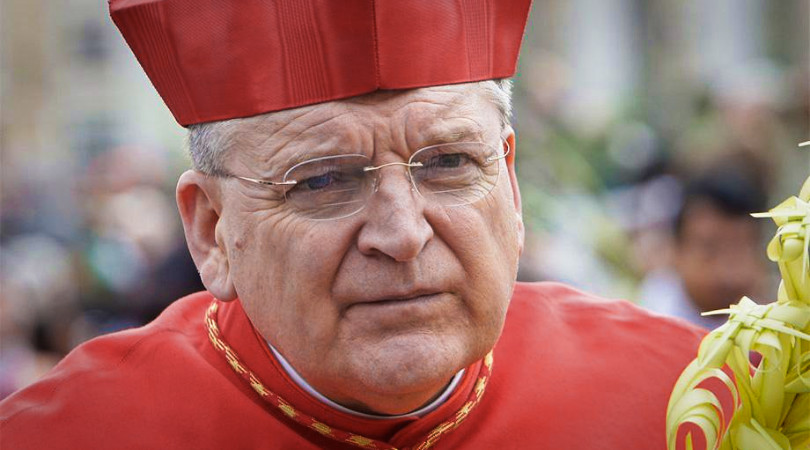 ROME (ChurchMilitant.com) - Cardinal Raymond Burke is calling out the German bishops as the masterminds behind the Amazon Synod, calling the synod an apostasy and an attack on Christ's lordship.

In a new interview with Sohrab Ahmari, contributing editor of the Catholic Herald, published on Friday, Burke addressed the upcoming Special Assembly of the Synod of Bishops for the Pan-Amazonian Region and upcoming German synod.

He slammed the Amazon Synod's working document as "a direct attack on the Lordship of Christ. It says to people, 'You already have the answers, and Christ is just one among many sources of answers.' This is apostasy!"

He also called out the way the German bishops were using the synod as an opportunity to pervert Church doctrine: "The fundamental concept of a synod was to call together representatives of the clergy and the laypeople to see how the Church could more effectively teach and more effectively apply her discipline."

"Synods never had anything to do with changing doctrine or with changing discipline," Burke went on to say, adding, "It was all meant to be a way of furthering the mission of the Church."

Burke called out Germany's Bp. Franz-Josef Overbeck of Essen, who proclaimed in June the synod will bring the Church to a "point of no return" after which "nothing will be the same."

German bishops are planning their own synod, and according to draft statutes passed last month, the bishops will address "authority and separation of powers," "sexual morality," "the priestly mode of life" and "women at the service of ecclesiastical offices."

Synods never had anything to do with changing doctrine or with changing discipline. It was all meant to be a way of furthering the mission of the Church.

The Vatican objected to the synod, warning that the "Synodal Way of the Catholic Church in Germany" is "not ecclesiologically valid" in its current design. Cardinal Reinhard Marx, head of the bishops' conference and archbishop of Munich-Freising, is vowing to go ahead with the synod, calling it doctrinally binding.

As far as I'm concerned, this synodal way in Germany needs to be stopped before greater harm is done to the faithful. They have already begun this, and they insist that it can't be stopped. But we're talking about the salvation of souls, which means we need to take whatever measure is necessary.

He continued, "The German bishops believe that they can now define doctrine, which is false," adding:

The catholicity of the Catholic Church is exactly what's at risk. The Catholic Church is a church that has one faith, one sacramental system, and one discipline throughout the whole world, and therefore we've never thought that each part of the world would define the Church according to particular cultures.

Since the working document for the Amazon Synod was released in June, faithful Catholics have been alarmed at topics up for discussion at next week's synod.

Burke is one of the several prelates speaking out against the discussion points in the synod. With him, Cdl. Robert Sarah, Cdl. Walter Brandmüller and Bp. Athanasius Schneider have all declared the Amazon Synod to be the indication of a Church in a massive crisis.

Sarah commented he is "afraid that some Westerners will confiscate this assembly to move their projects forward," adding, "I am thinking in particular of the ordination of married men, the creation of women's ministries or giving jurisdiction to laypeople."

These points concern the structure of the universal Church. They cannot be discussed in a particular and local synod. The importance of its subjects requires the serious and conscious participation of all the bishops of the world. Yet very few are invited to this synod. To take advantage of a particular synod to introduce these ideological projects would be an unworthy manipulation, a dishonest deception, an insult to God, who leads his Church and entrusts him with his plan of salvation.

Brandmüller also spoke out in a letter to the College of Cardinals, asserting the Church is in "a situation never before seen in the Church's history, not even during the Arian crisis of the fourth and fifth century."

He noted the synod's working document is rampantly heterodox, saying, "Some points ... seem not only in dissonance with respect to the authentic teaching of the Church, but even contrary to it" and urged his fellow cardinals to oppose "any heretical statements or decisions of the synod."

He added, "We must face serious challenges to the integrity of the Deposit of the Faith, the sacramental and hierarchical structure of the Church and its Apostolic Tradition."

On Sept. 17, Burke, along with Bp. Schneider, asked faithful Catholics to participate in a 40-day crusade of prayer and fasting, ending on Oct. 26, the day before the conclusion of the Amazon Synod.

They asked for Catholics to pray at least one decade of the Rosary daily and to fast once a week so that "the theological errors and heresies inserted in the [working document] may not be approved during the synodal assembly" and that Pope Francis "may confirm his brethren in the faith by an unambiguous rejection of the errors of the [working document]."