Cdl. Burke to Clergy: Be Brave Despite Likely Schism

BUENOS AIRES, Argentina (ChurchMilitant.com) - Cardinal Raymond Burke said the Church in America and Germany are effectively schismatic but called on fellow clergy to bravely proclaim "Christ is with us and will be until the end."

Fr. Javier Olivera Rabasi of Argentina, a well-known lawyer and author in the Spanish-speaking world who appears on YouTube, had a recent video chat with Burke while the famed American clergyman visited the United States. The cardinal specifically asked to speak in Spanish during that conversation, Olivera said, rather than English or Italian, as a way of reassuring millions of Spanish-speaking Catholics who are increasingly living under socialist governments' compromised clergy.

Problems Rooted in 'Crisis of Faith'

Cardinal Burke told Olivera, who holds doctorates in history and philosophy, that the Church has allowed moral corruption and the entry of secularism. This is possible, he said, because many bishops do not accept basic Church doctrine and do not discipline wayward priests.

Observing there is bountiful evidence to support Benedict's concern, which has been repeated by others, Olivera asked Burke why he believes we are living in a crisis of faith and to what he attributes it.

"For centuries, there has been a secularization of culture. In medieval times, culture was defined as Christian even while there were disputes between the Church and rulers. But the culture itself was Christian," Burke pointed out.

But that didn't last. Burke noted:

It was during the Enlightenment and centuries afterward that there was an exaltation of man and a forgetting of God as Creator, Who defines human nature and all things. This has grown such that man presumes to define life and marriage as a rejection of the love of a husband and wife. It would prohibit the worship of God while forcing people to accept acts that are utterly contrary to moral law. This is a crisis in secular culture, but the Church is in the world and is in danger of allowing the entry of secularism into itself. It is therefore that we have experienced a secularizing force within the Church, a loss of faith and moral corruption.

I believe Pope Benedict XVI and [Pope] St. John Paul II saw this crisis very clearly and pushed for a new evangelization of the same faith as it was transmitted by the Apostles throughout the Christian centuries in an incorrupt line. There is a need for catechesis today because young people and families are exposed today to ideas hostile to God and to our salvation. We must support families and young people in their faith in God and encounter the happiness that all seek. We see that secular culture provides no happiness. We must serve others by announcing the gospel and an encounter with Christ in the Church and his presence among us.

While some Catholics find living their faith is difficult within the Church today, history shows there have been challenges and disputes in the past, Olivera consoled listeners.

"While the crisis may be great, we hope we can be equal to the circumstances," he said, adding, "God has brought us into existence today, and we have been born today so that we may be sanctified."

The situation in the United States is very worrisome.

Olivera admitted, however, the crisis includes differences over very basic teachings of the Church:

For example, in the U.S., there is the well-known Jesuit Fr. James Martin, who openly supports homosexuality without censure. In Germany, several priests and bishops support blessings or sacramentalization or pseudo-sacramentalization of homosexual partners, ordination of women "priestesses." Is there a real schism in the Church or are there two religions within the same ecclesial structure?

The situation in the United States is very worrisome, the cardinal agreed.

"The Jesuit you mentioned is openly against the constant teaching of the Church regarding homosexual behavior. The scandal is that there is no disciplining of this priest. Some bishops have declared that he is wrong, but his superiors do nothing," Burke rued.

Bishops are failing in their responsibility as spiritual "fathers" leading their flocks.

When asked about Catholic politicians who say they are Catholic but who clearly support abortion legislation and homosexual marriage, Burke said he considers the situation in Germany worse because there are bishops taking the Church into heresy regarding homosexuality, marriage and other fundamental Catholic doctrines.

Burke boiled it down:

In my view, there is now a schism that is real if not declared. It is a schism in practice, if it can be called that. This is very serious, especially for faithful Catholics who want to be faithful to Christ and his Church. These German bishops have not been disciplined. The situation continues, and it is difficult to see how the situation can be reconciled. We must pray to the Lord for our Church while testifying to the truth found in the Church.

Olivera countered that many Spanish-speaking people living in the United States cannot understand that Joe Biden calls himself a Catholic even though he supports abortion and the LGBTQ agenda. Given that Biden has not suffered an official censure by the Church, the priest told Burke, "Sometimes the sheep feel that the shepherd fears the wolf."

"Yes, he's like a hireling who wants to accommodate the world when he should defend the flock. It is very grave," Burke assessed, adding:

I hope that the American bishops at their June conference will say politicians such as Biden and Pelosi and others may not receive Holy Communion and are under Church sanction ... in order to end the scandal. At the very least, they are apostates ... because they have abandoned the Lord to embrace a sinful life and very harmful things such as the murder of babies in the womb.

The prelate recalled that in 2000, then-cardinal Joseph Ratzinger briefed then-cardinal Theodore McCarrick and wrote a confidential letter saying that pro-abortion Catholics like presidential candidate John Kerry should be barred from Communion. Nevertheless, the bishops voted later that each individual bishop could decide whether or not to give the sacrament to pro-abortion Catholics in their diocese.

Sometimes the sheep feel that the shepherd fears the wolf.

"I was bishop of St. Louis then," the cardinal recalled, "and I did not receive that letter. It was not communicated to us."

Regarding the five dubia (questions) that he and three other cardinals presented to Pope Francis in 2016 regarding Amoris Laetitia, Cdl. Burke said, "Sadly, we have not received any answer nor any acknowledgment that they were received."

The cardinal added that he still does not know the pope's thinking about the issues raised by the dubia even though he is assured that Amoris Laetitia does not change the eternal teachings of the Church about marriage or reception of the Eucharist (canon 915).

Father Olivera noted that "two creeds" or "two worldviews" appear to have emerged, along with the promulgation of the Novus Ordo Mass of Pope Paul VI alongside the "extraordinary" or Tridentine Form of the Mass.

"For 14 centuries, the Mass was the same, save for a few changes. In its fundamentals, it was always the same. After Vatican II, there was a so-called reform that radically changed the form of the rite," Cdl. Burke noted.

Pope Benedict XVI, he said, has shown his preference for the Mass as celebrated over the centuries, as revealed in his motu propio, Summorum Pontificum. That document allowed priests to celebrate the Tridentine Mass privately and in response to requests from the faithful.

"In the U.S. and other countries, I have seen that many people, especially the young, are seeking out the Latin Mass because they clearly see the Mystery of Christ descending upon the altar and making present his sacrifice on Calvary," Burke noted.

He added that he hopes the Novus Ordo Mass will be reformed — clarifying, though, that it is valid in its present form.

When asked how priests can remain faithful to their vocation to fearlessly preach the truth, even despite opposition or threats, Cdl. Burke called on the clergy to carefully study the Catechism and preach Church doctrine in its entirety.

"Remain calm," Burke recommended, and avoid feeling alone. "This is a battle. We have been taught the truth and we must remain serene, avoiding exaggeration or any expression that does not reflect the charity that comes from Christ: Preach the truth with charity. Tell the truth without conceding to political correctness" or the constant critics, he urged.

Burke and Olivera echoed similar sentiments that clergymen should not focus solely on the Church's crisis or problems in the few minutes available during Sunday homilies.

"Christ is with us and promised to be with us until the end," Burke offered as encouragement.

When asked how an eventual successor to Pope Francis should lead the Church, Burke replied, "Most importantly, the pope should be a teacher of the faith, to teach the faith and reform the liturgy." But he added the future pontiff should also focus on morality — a more important objective than personal appearances.

"It is more important for the pope to focus on teaching the faith and reforming the liturgy than on travel. He is the custodian of the faith and should promote it," Burke reflected.

The pope, he reminded, has all the authority he needs to preserve the faith and respond to heresies.

"The Church needs a pope who understands this Petrine service, of serving as Christ's vicar on the earth," he concluded.

Cardinal Burke is a member of the Apostolic Signatura, the equivalent to a supreme court, but served as prefect of that body until his removal by Pope Francis in 2014. In June, he will celebrate three pontifical Masses in the Tridentine Form and ordain a priest of the Priestly Fraternity of St. Peter at a conference on Summorum Pontificum, to be held in Mexico. Olivera will participate in the conference. 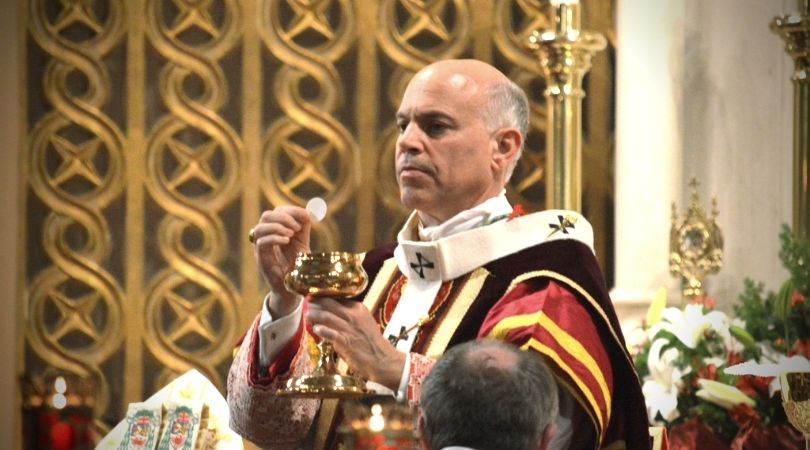