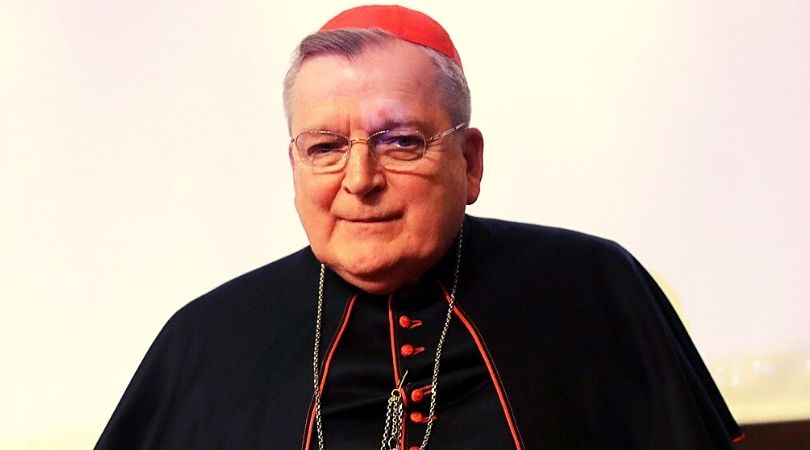 LA CROSSE, Wis. (ChurchMilitant.com) - "We come to Our Lady of Guadalupe on her feast day with troubled and heavy hearts. Our nation is going through a crisis which threatens its very future as free and democratic."

The cardinal also spoke about COVID-19, saying, "Then there is the mysterious Wuhan virus, about whose nature and prevention the mass media daily give us conflicting information. What is clear, however, is that it has been used by certain forces, inimical to families and to the freedom of nations, to advance their evil agenda."

"These forces," he warned, "tell us that we are now the subjects of the so-called 'Great Reset,' the 'new normal,' which is dictated to us by their manipulation of citizens and nations through ignorance and fear."

Cardinal Burke's remarks come as left-wing political leaders talk about using the COVID-19 crisis as an opportunity to make massive changes to society.

This is our chance to accelerate our pre-pandemic efforts to reimagine economic systems.

For instance, in September, Canada's Justin Trudeau remarked that the Wuhan virus "has provided an opportunity for a reset," adding, "This is our chance to accelerate our pre-pandemic efforts to reimagine economic systems that actually address global challenges like extreme poverty, inequality and climate change."

Sticking with the issue of the Wuhan virus, Cdl. Burke went on to say in his homily, "The response of many bishops and priests, and of many faithful, has manifested a woeful lack of sound catechesis. So many in the Church seem to have no understanding of how Christ continues his saving work in times of plague and of other disasters."

Back in March, every diocese in the United States banned public Mass. Many dioceses put a hold on confirmations and marriages, and some bishops went so far as to ban confessions and baptisms. Most of America's Catholics were unable to attend Mass for months on end.

To attain economic gains, we as a nation have permitted ourselves to become dependent upon the Chinese Communist Party.

"The worldwide spread of Marxist materialism," Cdl. Burke said at a different point in the homily, "which has already brought destruction and death to the lives of so many, and which has threatened the foundations of our nation for decades, now seems to seize the governing power over our nation."

He argued, "To attain economic gains, we as a nation have permitted ourselves to become dependent upon the Chinese Communist Party, an ideology totally opposed to the Christian foundations upon which families and our nation remain safe and prosper."

Burke's homily Saturday touched on many subjects of interest to faithful Catholics today. For instance, he referenced reports on clerical sexual abuse and financial corruption, saying, "What is more, our Holy Mother Church, the spotless Bride of Christ, in which Christ is ever at work for our eternal redemption, is beset by reports of moral corruption, especially in matters of the Sixth and Seventh commandments, which seem to increase by the day."

Burke brought up by name the now-laicized ex-cardinal Theodore McCarrick. McCarrick was removed from public ministry in June 2018 amid allegations of homosexual abuse, resigned from the College of Cardinals in July 2018 and was reduced to the lay state in February 2019.

When laity voice questions and concerns to their bishops, Cdl. Burke observed:

Too often, the faithful receive nothing in response, or a response which is not grounded in the unchanging truths regarding faith and morals. They receive responses that seem to come not from shepherds but from secular managers. The confusion regarding what the Church truly teaches and demands of us in accord with her teaching generates ever-greater divisions within the body of Christ.

Apparently referencing the Wuhan virus lockdowns, the cardinal remarked, "At a time when we need to be close to one another in Christian love, worldly forces would isolate us and have us believe that we are alone and dependent upon secular forces — which would make us slaves to their godless and murderous agenda."

Later in the homily, Burke said, "Yes, our hearts are understandably heavy, but Christ, through the intercession of His Virgin Mother, lifts up our hearts to His own, renewing our trust in Him, Who has promised us eternal salvation in the Church. He will never be unfaithful to His promises. He will never abandon us."

"Let us not be beguiled by the forces of the world and by false prophets. Let us not abandon Christ," he concluded.