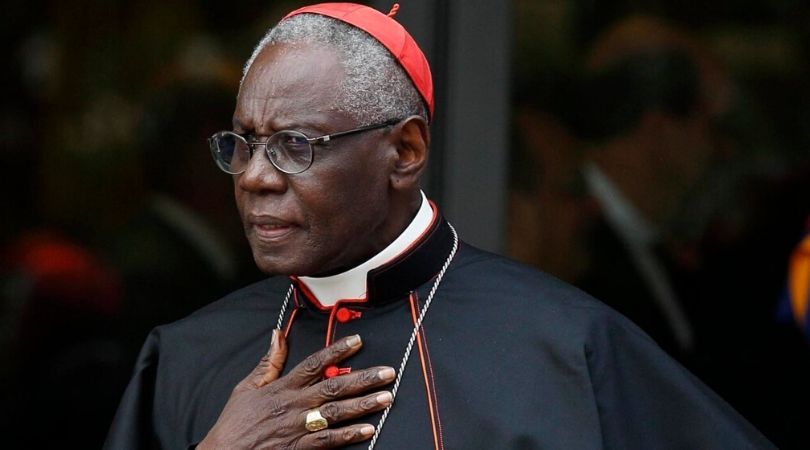 Clerical sex abuse is a symptom of secularized priests

VATICAN CITY (ChurchMilitant.com) - The Vatican's head liturgist is saying that the sexual abuse crisis and cries to end celibacy are signs of priestly formation that wasn't God-centered.

Cardinal Robert Sarah told the National Catholic Register on Friday that many priests are facing a "major crisis" today because there is "a deep flaw in their formation."

"The discovery of the great number of sexual abuses committed by priests, and even bishops, is an indisputable symptom of this," he observed.

The reason for the great increase in pedophilia amongst priests, he added, is owing to a secularized priestly formation that is absent of God.

Without experiencing a daily dependence on God, priests then run the risk of diabolically abusing power and sexually abusing others.

"It is only where Faith no longer determines man's actions that such crimes are possible," the cardinal noted.

A priest is a man consecrated or set apart "for the service of God and the Church," Sarah defined. Yet many priests were formed to be like secular men, he said.

"They wanted to make the priest a man like any other," he lamented. "Some priests were formed without putting God, prayer, the celebration of Mass, the ardent search for holiness at the center of their lives."

Too often, priests were not taught to seek support from God alone and to see their priestly lives obtaining meaning only when lived through and for God, said the Guinean cardinal. Without experiencing a daily dependence on God, priests then run the risk of diabolically abusing power and sexually abusing others, he warned:

If a priest doesn't daily experience he is only an instrument in God's hands, if he doesn't stand constantly before God to serve him with all his heart, then he risks becoming intoxicated with a sense of power. If a priest's life is not a consecrated life, then he is in great danger of illusion and diversion.

The desire to throw out celibacy is but another sign of secular formation, which fails to understand the true meaning of the consecrated life of celibate priests. Celibacy is the sign that a priest's life "has meaning only through God and for him," he explained.

The poor, the simple, rank-and-file Christians do not demand an end to celibacy!

The desire to ordain married men, he said, "is to imply that priestly life is not full-time, that it does not require a complete gift, that it leaves one free for other commitments ... that it leaves time free for a private life," he related.

But this is false, he said, because a "priest remains a priest at all times."

He shot down the modern notion that priestly ordination is simply "a generous commitment," saying it was, instead, "a consecration of our whole being" and demands a "permanent conversion."

Celibacy is the "unquestionable sign," he countered, that a priest is "entirely possessed by God." Doing away with celibacy would call this into question, he added, and "would seriously aggravate the crisis of the priesthood."

The cardinal called the ordination of married men a "fantasy of Western academics" and not something called for by the laity.

"The poor, the simple, rank-and-file Christians do not demand an end to celibacy! They expect priests to be saints, to be entirely given to God and his Church," Sarah emphasized.

Celibate priests, he said, "incarnate among them the figure of Christ," Who is the spouse of the Church.

It is God who calls men to the priesthood, the Church who confirms this call and celibacy that guarantees this call, he said.

"A man can only renounce starting a family and having a sexual life if he is certain that God is calling him to this renunciation," affirmed Sarah. "Our priesthood hangs on God's call and on the Church's prayer for vocations."

To question celibacy, he stated, is to want to make the Church a "human institution," within our power and within our reach.