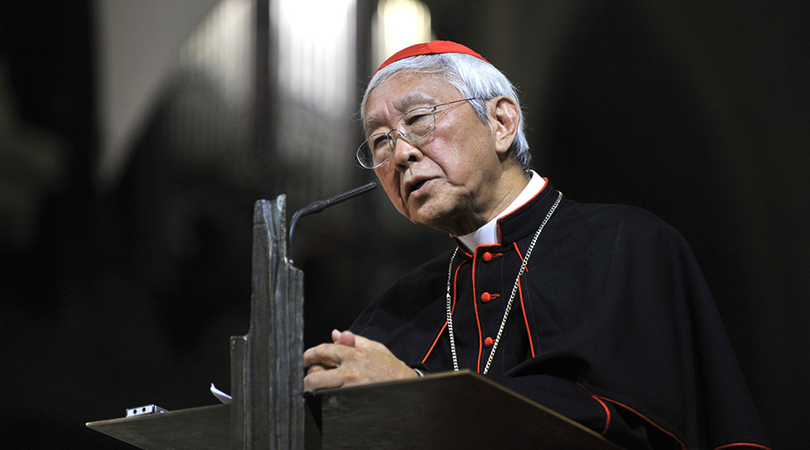 HONG KONG (ChurchMilitant.com) - Cardinal Joseph Zen took to social media Wednesday night, sounding as if he were a professor in an international virtual classroom lecturing on the ramifications of globalization, the threat of China and the effects of the Wuhan virus.

Zen begins his discourse by calling it "A short reflection on the tragic reality which is still in the happening" which is "a pandemic of apocalyptical dimension, causing incalculable loss of lives and of economic resources."

Zen admits we don't see an end to the pandemic yet, but encourages us to "take stock of some obvious facts and analyze their cause-effect relation," because "by doing so we can prepare ourselves for the rebuilding of our society and providing new defenses in the future for our humanity."

The Threat of Globalization

In order to do this we must recognize a few facts, he says. The first fact, according to Zen, is that we must understand the pandemic began in China, and quickly spread around the whole world. "It must have something to do with globalization," he remarks. The world has become a metaphorically smaller place, and Zen expounds on two general movements of the modern world that have made it so — mass transportation and mass communication. The first contributed to the Wuhan virus spreading internationally, and the second could have prevented it from happening.

"The enormously increased mobility of the people explains, in part, the fast spreading of the pandemic," says Zen. "But the modern progress in communication could provide timely alarm and contain that spreading. Obviously something went wrong," he says.

Zen considers the value of globalism: It "is an ambivalent phenomenon," he says. "It may be good, it may be bad, it depends on the way we manage it."

One is motivated by charity and solidarity, the other by selfishness and marginalization, he explains.

Exploitation in the 'Village'

Zen then begins expounding on today's globalization movement and China's role in it.

The poor of the poor countries did not feel they got any help from this globalized economy of the world.

"Many people welcomed the arrival of globalization," he recalls, "with the world becoming a 'village,' a 'big family.' Cooperation and mutual help would make the world better." People of goodwill who are rich and strong could help the poor and weak, he explains. "But, alas, the actual outcome was much disappointing," he lamented.

A question to ponder, he suggested, is why there have been so many protests of meetings related to the World Trade Organization (WTO).

"The answer is," he suggests, "the poor of the poor countries did not feel they got any help from this globalized economy of the world." They are not benefitting.

As the selfish imbalance in human nature plays out on the global scene, China went from a formerly poor country to a world power — a model and hope for poor people around the world, Zen explains. Yet, he challenges this perception.

Distinguish Regime vs. Its People

"We have to distinguish between the people and the nation," he says. The nation has become strong because of its population size and the industriousness of its people. However, he says, China is a totalitarian state.

In a totalitarian regime the people contribute to the wealth of the nation, but they don't get a fair share in its prosperity. In China the people are slaves under the [Chinese] Communist Party (CCP). To slaves it is not allowed the luxury of dignity. Under the dominion and bad example of their masters, the Chinese people have lost their traditional virtues. In a world of "struggle for survival," they make recourse to lies and violence, just like their masters. China became a threat to the world.

Zen added that the world, in its dealings with China, wittingly or unwittingly has become "accomplices in nourishing a dangerous monster." Zen explains it is the party leaders who become rich, off the backs of the people. And in a global village, he warns, "for the CCP ... exploiting their countrymen to being the imperialists exploiting the other countries, there is just one step."

In true communist form, [Chinese President] "Xi Jinping presents himself to many Asian and African nations as the savior — the one who can free them from the poverty in which they were left by their colonizers." They lend money, send workers and before long the money goes back to China and the poor countries are fully indebted to them. "The new colonizers are worse than the old ones!" Zen decries.

Now comes a pandemic, Zen says, and it is waking everyone up.

"Can we be proud of our scientific progress, of the many possibilities of more consumption? All a sudden we are losing everything and find ourselves powerless," he observes.

He reminds us that in the midst of chaos we know truth, freedom and gospel values are what's important.

"We discover that the real heroes are not those we used to admire on the screen, but those who sacrifice themselves in serving the sick, those who take care to keep clear and healthy our environment," he says.

Those who love God and neighbor are the true heroes, he alludes, and always have been.

"We appreciate our Faith, which teaches us we are children of God — brothers and sisters in the human family," he adds.

And, as if to say the virus has been a needed form of chastisement, Zen concludes: "Thank you, Lord, for this lesson from the pandemic."