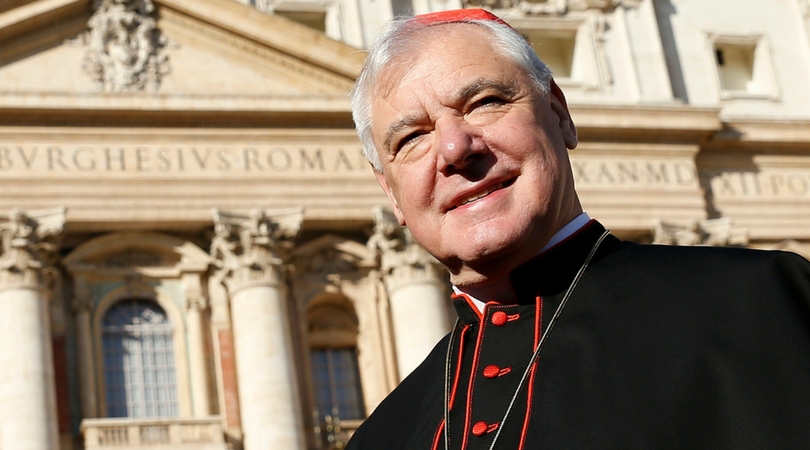 "Contrition, confession and reparation are the three necessary elements for absolution"

ROME (ChurchMilitant.com) - While many prelates are falling silent on the grave issue regarding sacrilegious reception of Holy Communion, Cdl. Gerhard Müller is speaking up.

During an interview published Wednesday, the prefect of the Congregation for the Doctrine of the Faith (CDF) was asked by Vaticanista Ed Pentin about the prelate's concerns, regarding the controversial papal exhortation Amoris Laetitia, which many bishops are using to justify giving Holy Communion to the divorced and civilly remarried.

The Vatican's watchdog of the Faith responded, "I have said it many times, and I repeat it here again ... Jesus established clearly, and without doubt, the indissolubility of valid matrimony. This is what we must preach, declare and explain to the Catholic faithful."

Beginning in 2014 with the extraordinary synod in Rome, the focus of many prelates has been on what's called "pastoral accompaniment" of the sheep with little talk of converting the sinner or calling them to obey God's commandments. During the interview, the cardinal speaks with welcome clarity about what "being pastoral" truly entails:

We should help people who find themselves in a situation of marital difficulty, but not only with pragmatic reflections, according to the spirit of the world, but according to the Holy Spirit, with the means of the sacraments and the internal and canonical conditions for the reception of Holy Communion, which necessarily includes the confession of all grave sin.

Many bishops, including those from Germany, Austria, Belgium, Malta and the Philippines are willing to admit divorced and remarried Catholics to Holy Communion without requiring they first repent "of having broken the sign of the Covenant and of fidelity to Christ" and then "take on themselves the duty to live in complete continence" as mandated by John Paul II in paragraph 84 of his exhortation Familiaris Consortio.

Contrition, confession and reparation are the three necessary elements for absolution.

Cardinal Müller is not such a bishop and in the interview he addressed the subject using clear and Catholic terms. "Contrition, confession and reparation are the three necessary elements for absolution," said the cardinal. "These are the immediate conditions for receiving the Holy Eucharist, Jesus Christ, who is the same divine Person who forgives us."

Confusion concerning a person's reception of Holy Communion without having first confessed all mortal sins is not limited to the hierarchy. Church Militant gets hundreds of comments a day from viewers. One person wrote in just today describing this very problem as follows:

I see this happening the Sundays when my adult kids go to Mass. I'm always praying that they come to Mass but then, after missing lots of Sundays, they still go up to receive Holy Communion, even though I've told them it's a sacrilege if they receive without going to confession. One son has told me 'it's medicine for the soul — Jesus will help me be stronger.' And because it's just me saying it and not the priest, bishop, cardinal or pope, my saying it has not changed them.

[T]he Catechism of the Catholic Church rightly stipulates [paragraph 1385] that "anyone conscious of a grave sin must receive the sacrament of Reconciliation before coming to Communion." I, therefore, desire to reaffirm that in the Church there remains in force, now and in the future, the rule by which the Council of Trent gave concrete expression to the Apostle Paul's stern warning when it affirmed that, in order to receive the Eucharist in a worthy manner "one must first confess one's sins, when one is aware of mortal sin."

Anyone conscious of a grave sin must receive the sacrament of Reconciliation before coming to Communion.

Cardinal Robert Sarah, prefect of the Congregation for Divine Worship, strongly objected last year to the notion of giving Holy Communion to those who live in adulterous unions. Echoing John Paul II's above mentioned encyclical he declares:

The entire Church has always firmly held that one may not receive Communion with the knowledge of being in a state of mortal sin, a principle recalled as definitive by John Paul II in his 2003 encyclical Ecclesia de Eucharistia on the basis of what was decreed by the Council of Trent. Not even a pope can dispense from such a divine law.

There's been some speculation that Cdl. Müller may be asked to step down this year from his role as prefect at the CDF. During the interview, Pentin asked him, "How important is it to you that you remain a senior figure of the Roman Curia at this time?" The cardinal's response gave evidence of his profound faith in the Mystical Body of Christ:

The Church does not depend on me, but, on the contrary, I depend upon the Church. The Church, for me, is not the external organization of the Roman Curia, but the People of God, the Body of Christ. The Church is both the sign and the instrument of the communion between God and the world.