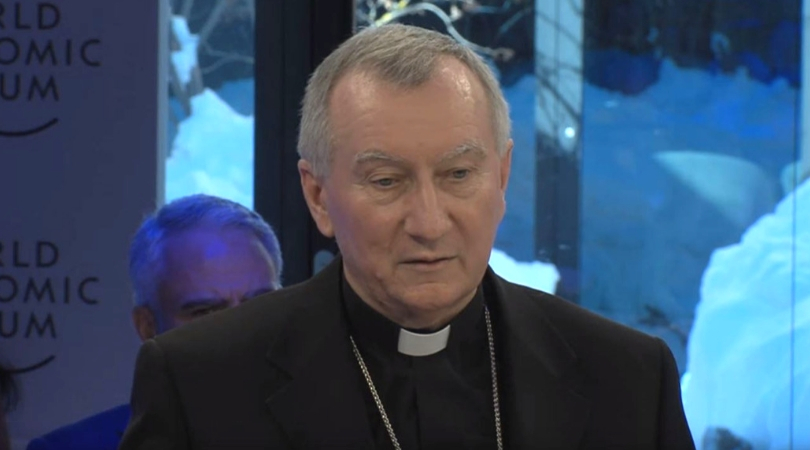 ROME (ChurchMilitant.com) - As Chinese Catholics are persecuted by the Communist government, a Vatican cardinal has characterized the Vatican-China accord as "positive cooperation."

Cardinal Parolin opined that dialogue between the Vatican and the Chinese government enables them to face "global challenges."

The cardinal said, "Many global challenges exist which need to be faced with a spirit of positive cooperation. I am thinking in particular of the great issues of peace, the fight against poverty, environmental and climatic emergencies, migration, the ethics of scientific development and the economic and social progress of peoples."

Global Times asked Cdl. Parolin what he thinks about those who are opposed to the Vatican-China accord. That accord kicked off a merging between the "underground" Church and the government-approved Church in China and gave Communist officials the power to appoint bishops.

Many have criticized the Vatican-China deal, claiming that Church leaders were betraying Chinese Catholics.

Cardinal Parolin noted that a move like the Vatican-China deal, "which can appear unprecedented," often draws criticism, and he admitted that "many questions" about Chinese-Vatican relations "still need to be addressed."

For Pope Francis ... the main interest in the ongoing dialogue is on the pastoral level: he is making a great act of trust and respect for the Chinese people and their culture of millennia, with the well-founded hope of receiving an equally sincere and positive response. The truly important point is that the dialogue should be able to progressively build a wider consensus by bearing abundant fruits.

Cardinal Parolin believes that the Vatican-China deal has already brought forth two "fruits." One of these "fruits," he opined, is that the Holy See and the Communist officials "are beginning to overcome reciprocal condemnations."

"We know each other better, we listen to each other, we understand the needs of those involved in the dialogue in a better way," he said.

The other fruit of the Vatican-China deal, in Cdl. Parolin's view, is "that two ancient, great and sophisticated international entities like China and the Apostolic See may become ever more aware of a common responsibility for the grave problems of our time."

"Global responses have to correspond to global challenges," Parolin stated. "Catholicism by its nature is a global reality, able to promote in an original way the search for meaning and happiness, to bolster the value of belonging to a specific culture and at the same time experience universal fraternity."

He added, "As a Chinese bishop recently pointed out, the Catholic communities in China today are asking to be fully integrated into universal communion, bringing to the Church the gift of being Chinese."

After the Vatican-China accord last year, China's persecution of Catholics seemingly ramped up. Catholic churches throughout China have been bulldozed.

In August 2018, Qianwang Catholic Church in China's Shandong province was demolished at the orders of Communist officials. It was the third church in the diocese of Jinan to be demolished in recent memory.

Cell phone footage shared online in late October showed a jackhammer demolishing the edifice of Our Lady of Bliss Shrine.

A similar video from Shanxi province showed government workers using a crane to remove an angel statue from Our Lady of the Seven Sorrows.

In February 2018, Cdl. Zen called the negotiations a "bad deal," "suicide" and "a shameless surrender."

He once warned Vatican officials, "You're putting wolves before your flock, and they are going to make a massacre."

In the recent interview, Global Times asked Cdl. Parolin about government policies of "sinicization" — altering religions to make them supposedly more Chinese. The newspaper asked Cdl. Parolin to compare and contrast sinicization with the "inculturation" practiced by Catholic missionaries, who became immersed in the local cultures in order to better preach the Gospel.

Parolin cited the example of Matteo Ricci, an Italian Jesuit who was a missionary to China from the 1580s to his death in 1610. Ricci was one of the first Europeans to read and speak Chinese.

The cardinal went on to say: "These two terms, 'inculturation' and 'sinicization,' refer to each other without confusion and without opposition: in some ways, they can be complementary and can open avenues for dialogue on the religious and cultural level."

In centuries past, the notion of inculturation caused much discussion and debate among missionaries to China. For instance, there were disputes over whether certain ceremonies, broadly referred to as "ancestor worship," were actually pagan worship or just social customs for respecting one's ancestors.