There's a new Bishop of Bling in town. Although the latest attempt by liberal media to taint the reputation of Cdl. Raymond Burke involves insinuations of a lavish lifestyle, missing in their crosshairs is their own favorite: Cdl. Donald Wuerl.

On November 4, British journalist Christopher Lamb, Rome correspondent for the left-leaning journal The Tablet, tweeted about the living quarters of various prelates' apartments, including that of Cdl. Burke. 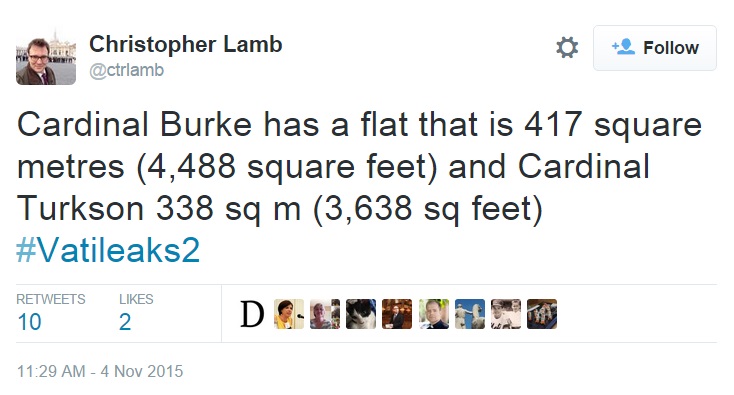 Others mentioned by Lamb include Cdl. Francis Arinze and Abp. Arthur Roche, among others.

Absent from Lamb's public shaming was any mention of Cdl. Donald Wuerl, progressive media darling, who has publicly sparred with Cdl. Burke on the issue of Holy Communion to pro-abortion politicians as well as the divorced and civilly remarried. Wuerl, as ChurchMilitant.com has confirmed, lives in a Washington, D.C. penthouse as part of a complex valued at nearly $43 million.

Located in the heart of Embassy Row, one of D.C's most elite neighborhoods, Cdl. Wuerl's third-floor apartment sits atop Our Lady Queen of the Americas parish, in one of the wealthiest areas in the nation's capitol.

The D.C. archdiocese is fiercely secretive of Wuerl's residence — and for good reason. Public tax records reveal the 2016 proposed value of the property is $42,917,680. The property owner is listed as the "Roman Catholic Archbishop of Washington," who has paid hundreds of thousands of dollars in taxes on the property over the past several years:

Laying aside the question of what this corporation is and how it's paying the hefty property taxes, the penthouse itself is the result of recent renovations of what was formerly a school, the third floor remodeled into a residential space. According to sources, Cdl. Wuerl's residence is strictly monitored, with reports of a possible security detail.

The archdiocese itself is intensely tight-lipped about his living arrangements. When ChurchMilitant.com called Cdl. Wuerl's office requesting his home address, the parish secretary gave a location in Hyattsville, Maryland. When pressed, she admitted the location was not his living quarters, but rather was where the cardinal "receives things." ChurchMilitant.com asked whether Cdl. Wuerl's home address is public record considering it's archdiocesan property, and the secretary explained it was policy not to give out his residential address.

ChurchMilitant.com then called Our Lady Queen of the Americas parish to confirm Cdl. Wuerl's residence, but the parish secretary refused to answer the question, and the line was abruptly disconnected.

In spite of the secrecy, multiple sources — both clerical and lay — confirmed to ChurchMilitant.com that His Eminence does indeed reside there.

One of our sources, George Neumayr, columnist for the American Spectator, verified this fact. One day, entering Our Lady Queen of the Americas parish, Neumayr told ChurchMilitant.com, "I saw a man with dyed hair, who was donning an earring, and who was wearing a priestly collar."

After the man explained how to find the chapel, he freely volunteered the information that "Cdl. Wuerl lives in a penthouse on the third floor."

The posh living arrangements are par for the course for Cdl. Wuerl. As former head of the Pittsburgh diocese, Cdl. Wuerl lived in a luxurious mansion in one of the city's wealthiest neighborhoods. Complete with a spacious wine cellar and six-car garage, Wuerl spent nearly 20 years in the 39-room Morewood Heights property, which was filled with antiques, sacred art, Oriental rugs and elegant furniture from the 17th, 18th and 19th centuries.

In keeping with Pope Francis' call for less extravagance on the part of clerics, Wuerl's successor, Bp. David Zubik, eschewed the lavish living quarters, spending only two weeks there before he chose to stay in a modest two-room apartment at St. Paul's Seminary in Crafton.

The property was then put on the market and sold for $2.5 million.

According to the Pittsburgh Post-Gazette,

In addition to the costs of maintenance, the house has an impressive tax bill: $44,068, according to records in the city treasurer's office and the Allegheny County real estate Web site. Only the house's chapel was tax exempt, because Mass was offered there regularly, said attorney Ira Weiss, solicitor for the city's public schools.

The taxes for the Pittsburgh mansion pale in comparison to those for Cdl. Wuerl's current living quarters on Embassy Row.

Interestingly, former head of the D.C. archdiocese Cdl. William Baum, who served as archbishop from 1973–1980, was embroiled in controversy for his own choice of living quarters. According to the Washington Post,

The only event during his seven years as archbishop that was remotely a scandal was the archdiocese's 1974 purchase of a $525,000 mansion as a residence for Cardinal Baum. The backlash was highlighted by a 25-day hunger strike by dissident priest Edward Guinan, who said the Church should spend its money on the poor.

Cardinal Baum rescinded the purchase of the house and continued living at the rectory of the Cathedral of St. Matthew the Apostle in Northwest Washington.

Times have changed, and today's archbishop of Washington owns a penthouse in a complex valued at $43 million.

Questions remain: What is the corporation named "Roman Catholic Archbishop of Washington," which as our research revealed owns massive amounts of property throughout D.C. and the surrounding areas? More importantly, how is it paying the property taxes, which amount to the hundreds of thousands of dollars each year? Are parishioners who drop their money in the collection plate thinking it will go toward the upkeep of their parish ultimately and unwittingly footing the bill?