Charge of the Barbarian Bishop Brigade 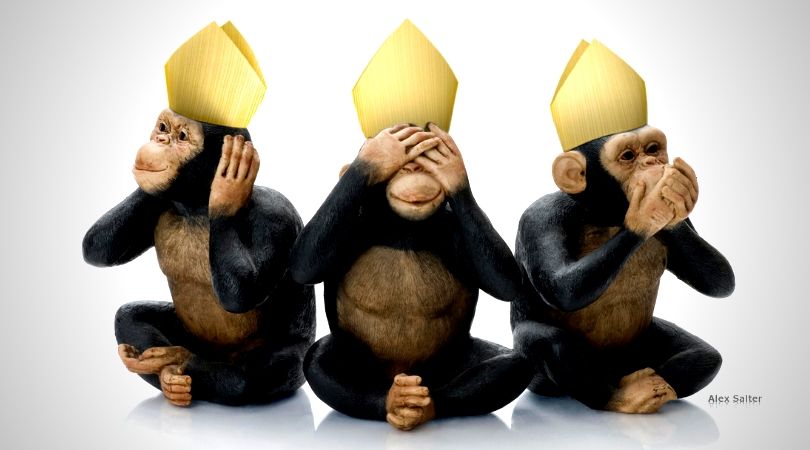 Barbarians are back. Masked mobs armed with Molotov cocktails and social justice slogans are rioting, pillaging and vandalizing the West with demonic fury.

Police and politicians, paralyzed by political correctness, genuflect in servile deference as stateless tribes such as Antifa and Black Lives Matter outrival the Huns and Goths at the gates of Rome in creating and celebrating the triumph of anarchy.

History doesn't repeat itself but it often rhymes. The barbarians have re-emerged in the course of the Gramscian "long march through the institutions." But for the first time in history, they are joined by a brigade of drum-beating bishops.

With stiffened cardboard holding stand-up mitres, the invertebrate successors of the mettlesome Apostles "take a knee" to St. Colin Kaepernick — supported only by their cosmetic, collapsible crooks and the pious fiction that they are battling real evil.

Verily, verily the bishops are successors of the deluded King Saul who imagined he was fighting real evil when he sought to kill David. In contrast, David armed with slingshot and pebbles, was combating concrete evil when he stepped into the colosseum for a duel-unto-death with Goliath.

Dennis Prager, radio talk-show host and Torah commentator, sums up the truth in a moral maxim: "Those who don't fight the greatest evils will fight lesser evils or make-believe evils." Prelates who don't fight evil are doomed to fight unicorns in pajamas.

Hold a sieve under the Niagara Falls of press statements, political parroting and grievance gibberish that swooshes from the sluices of the bishops' spin-doctors.

Those who don't fight the greatest evils will fight make-believe evils.

What are they fighting? Man-made climate change; imagined racism and homophobia; white privilege from Snow White and the Seven Dwarfs; the Unholy Trinity of nationalism, populism and capitalism; the reincarnation of toothbrush-mustached Hitler as the orange-haired Monster Donald J. Trump; photo-ops of the president with his Bible outside St. John's Episcopal Church; and Trump kneeling with his Catholic wife at the shrine of Pope John Paul II.

With the outbreak of the Wuhan virus, some bishops have new evils to combat — Catholics who want Latin Masses and who want to "take a knee" (or, worse, both knees!) for Jesus and received Holy Communion on the tongue.

Anglican Abp. of Canterbury Justin "Wobbly" Welby's new Gadarene demons (after he battled evil Brexit) are goosestepping vicars who want to enter their own churches and do a solo act of online worship for their flocks during the lockdown.

Pope Francis is pounding his moral sledgehammer at tobacco. On Pentecost 2020, Vatican News ranted against vampire-like tobacco companies. Francis gained virtue-signaling points at compound interest after banning the sale of holy smokes in the Vatican in 2017.

But why am I calling out the bishops as barbarians? Barbarians are bloody and barbaric. The bishops wouldn't have the heart to swat a swarm of mozzies even if the pests were binge drilling their pompous posteriors. Barbarians aren't schooled at Eton, Cambridge or one of the pontifical universities in Rome. Bishops, not barbarians, talk in managerial jargon sounding as tinny as a can of beans.

Thugs are thugs and bishops are bishops, and ne'er the twain shall meet, no? Hate to break it to you, Rudyard, old chap, but the two have finally joined forces. The barbarians are not just within our gates, they are roosting on episcopal thrones in cathedrals.

"In its simplest usage, 'barbarian' referred to groups that spoke a different, incomprehensible language. It was not necessarily an insult but an all-encompassing description of foreign groups," writes Jakub Grygiel in Return of the Barbarians: Confronting Non-State Actors from Ancient Rome to the Present.

"Barbarian" was born as an onomatopoeia: the word imitates the "bar ... bar ... bar" babbling sounds that the Greeks believed they heard when foreigners were speaking their own languages. It was "a term of intellectual frustration" as the counter-buffeting of unintelligible syllables was "baffling and reprehensible" as archbishop Wilton Gregory would memorably declare — making a monumental buffoon of himself.

"They are barbarians because they remain poorly understood and represent an intellectual challenge. We are baffled by them and we do not understand them," Grygiel explains.

It is our inability to understand the bishops' moral vocabulary which makes them barbarians. For centuries, with notable exceptions, we've been used to the language of moral clarity. "If the bugler does not sound a clear call, who will prepare for battle?" St. Paul asked in his letter to the Corinthians.

But our high priests in purple, who, according to St. Paul are fit for office only if they are "able to teach" (1 Timothy 3:2) are now experts in the somersaulting of moral categories. They possess no language to address real evils.

Pope Francis is pounding his moral sledgehammer at tobacco.

"Woe unto them that call evil good, and good evil; that put darkness for light, and light for darkness; that put bitter for sweet, and sweet for bitter!" declaimed the prophet Isaiah in the eighth century B.C.

He could well have been addressing Wilton Gregory or Donald Wuerl or Vincent Nichols or Justin Welby or any of the 14 Anglican bishops/bishopettes who erupted with ear-shattering outrage at Prime Minister Boris Johnson's chief advisor Dominic Cummings for breaking lockdown rules to find childcare for his autistic child, but are feeding rioters in London and Washington with plaudits and cucumber sandwiches.

Real Barbarians Not Being Fought

So, what are the real evils the bishops almost never fight? Communism exterminated 100 million souls in the last century. It has mutated and returned as cultural Marxism. The bishops will never fight this real evil: they have become its chaplains and cheerleaders.

Today, a Christian is killed every six minutes and 500,000 Christians around the globe are unable to practice their faith freely.

On the day Bp. Mark J. Seitz of El Paso was "taking a knee" for Black Lives Matter, an illiterate Catholic Pakistani couple, Shagufta Kausar and her husband Shafqat Emmanuel, was pleading for justice after spending six years on death row facing trumped-up charges of blasphemy. Pope Francis honored Seitz with a personal phone call a couple of days later.

More Christians have been martyred in the last hundred years than in the 2,000 years of church history. The bishops will never fight this real evil: Instead they fight Islamophobia and Pope Francis has schmooze fests with the Grand Imam of al-Azhar.

Abortion has unleashed a genocide of 61 million unborn babies in the United States since Roe v. Wade, 9 million in the United Kingdom since 1967, and an unspeakable figure of over one billion five hundred twenty-three million worldwide since 1980. The bishops will never fight this real evil: Instead they fight Dominic Cummings and Donald Trump.

More Christians have been martyred in the last hundred years than in the 2,000 years of church history.

The episcopal newspeak of bar ... bar ... bar is now at peak absurdity. We do not understand it. Bishops support Black Lives Matter rioters who, in the United States have murdered black cops and in London, just vandalized the statue of Abraham Lincoln — the president who fought to end slavery, just as they fight Donald Trump — the most pro-life president in American history! It sounds barbaric to our ears.

In Homer's Odyssey, the sailors succeed in bypassing the fatal song of the sirens only after they stop their ears with wax and bind Odysseus to the mast of the ship.

In Franz Kafka's version of the story "The Silence of the Sirens" (Das Schweigen der Sirenen), the sirens do not sing. They have a deadlier weapon — their silence. Kafka's Odysseus not only has himself bound to the mast of his ship, but also has his ears stopped with wax.

The bar ... bar ... bar siren-speak of the bishop-barbarians is far more insidious than Homer's singing sirens or Kafka's silent sirens. Contra visibiles barbaros — faithful followers of Jesus will have to stop our ears and bind ourselves to the mast of his Cross if we are to overcome this formidable onslaught — the charge of the barbarian bishop brigade.