How the Church abandoned its mandate and outsourced its mission


Then Jesus approached and said to them, "All power in heaven and on earth has been given to me. Go, therefore, and make disciples of all nations, baptizing them in the name of the Father, and of the Son, and of the Holy Spirit, teaching them to observe all that I have commanded you. And behold, I am with you always, until the end of the age." Matthew 28:18–20

The Great Commission, which is the primary act and purpose of the Catholic Church, has never changed. The conversion of peoples and nations to the Teachings of Our Blessed Lord is the charge given to the Church, and everything done by the Church is done to this specific end. And anything done without this specific end is empty and without purpose. 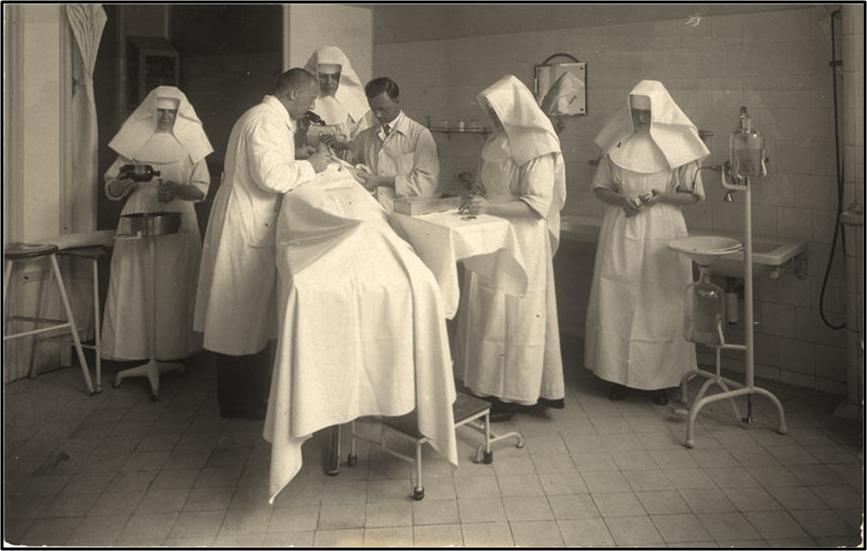 Why, therefore, in recent years have the great acts of charity which have always belonged to the Church, been handed over to those who do not seek first the conversion of sinners? Until the 20th century, the Catholic Church had worked through religious orders to provide aid to the poor, health care to the sick, and education to the ignorant. Catholic hospitals were filled with nuns and priests well educated in the healing arts, and the cost of health care was quite low. Catholic school classrooms were led by nuns and priests, and even the poorest kids in the neighborhood could afford a world-class education there. And the care of the world's poorest was done by missionaries who sought first the salvation of the souls they served, while also working to provide food, housing and clothing … and it didn't cost billions of dollars to do it.

The first charitable institution to be industrialized was healthcare. One by one, Catholic hospitals went from being staffed by priests and nuns to private doctors with families to house and feed, cars to drive, and college tuitions to pay. As a result, health care costs went up, and the Church's influence went down. Suddenly, what had been a corporal work of mercy was now an industry. 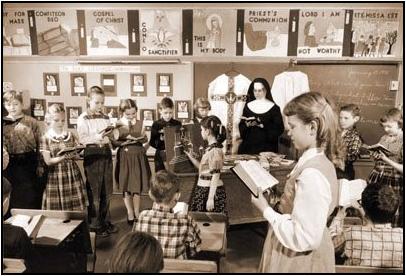 Catholic education soon took a hit, as nuns and priests were replaced by private teachers and administrators, who also required salaries for their families. And as Catholic education became more of an industry, the influence of the Church declined there as well.

That the works of charity are now an industry is completely undeniable. Catholic charitable organizations compete with other organizations for large government grants, and in the name of helping the poor, executives in these organizations are raking in the cash. For instance, the tax form 990 for fiscal year 2014 for Catholic Charities USA shows the top eight paid employees all making over six figures each. In fact, for working a logged 35 hours per week, Fr. Larry Snyder made $381,080 and his Chief Operating Officer raked in $412,439. That's two individuals working to help the poor, pulling in nearly half-a-million dollars EACH. All told, with benefits included, the top eight executives at Catholic Charities USA account for $2,027,680.

It's no different at Catholic Relief Services. The latest tax form 990 shows that CRS' president, Dr. Carolyn Woo, is earning $445,426 in salary and benefits in order to do "charitable" work. And the obscene salaries paid to the top eight of CRS' executive leadership comes to $2,180,935. In fact, 27.5 percent of the Rice Bowl collection for 2014 (see page 18 of CRS' 2014 Annual Report) paid the salaries and benefits of these eight individuals ALONE. That's one of every three dollars collected from pew-sitting Catholics across the country going to pay the salaries and benefits of eight people … all in the name of helping the poor. 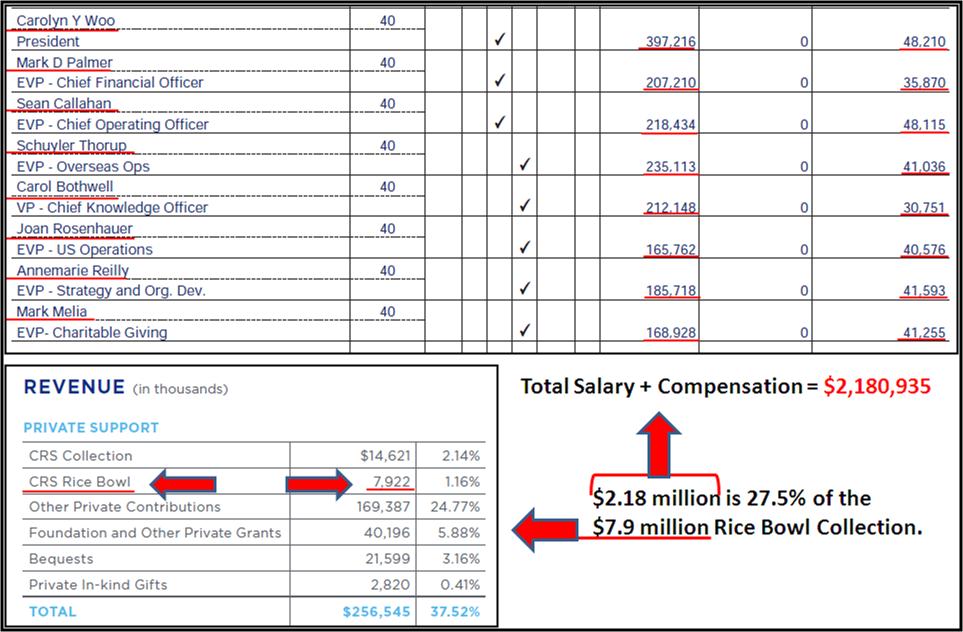 Worse than executives at Catholic charitable organizations getting rich in the name of helping the poor, much of the actual work is being outsourced to organizations who have no interest in maintaining the integrity of Catholic moral teaching. For example, the Catholic Campaign for Human Development doesn't actually do ANY of its own work; all it does is dispense grants to community organizing groups (many of whom are acting in direct opposition to Catholic moral teaching) who do the work CCHD claims it does. Catholic Relief Services applies for and obtains large government grants that require it to pass some of the money along to organizations that are attacking the Gospel of Life. In 2012, CRS provided $64.65 million to organizations that are themselves dispensing contraception, committing abortions and performing sterilizations.

And while all of this is going on, the Mandate of the Church has taken a back seat. In September of 2014, CRS' Vice President for Government Relations and Advocacy Bill O’Keefe said in a CNN interview, "We assist people of all backgrounds and religions and we do not attempt to engage in discussions of faith." He added, "We're proud of that. We like to say that we assist everybody because we're Catholic, we don't assist people to become Catholic." This statement is not dissimilar from what CRS' Chief Operating Officer Sean Callahan said to Michael Hichborn in a November 2012 meeting. Callahan told Hichborn that CRS works to convert people's minds to how to treat people and how to do things, but not to the Catholic Faith. When Hichborn reminded Mr. Callahan that Catholics have an obligation to proclaim the Gospel and bring all souls to Christ, his response was to equate feeding people and preaching the Gospel with "bribing the poor."

We shouldn't be surprised, however, that the charitable works of the Catholic Church have turned to industry, and thereby abandoned the evangelistic mark of the Church. Pope Paul VI, in his 1975 apostolic exhortation Evangelii Nuntiandi, predicted this very thing. In paragraph 32, he said: 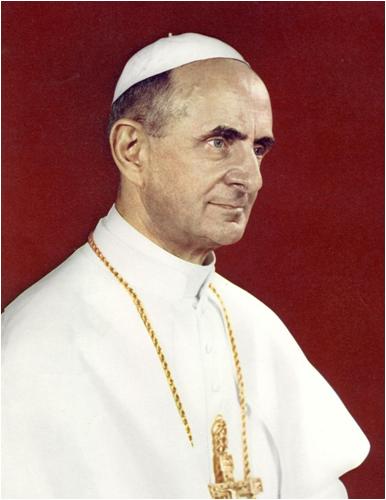 We must not ignore the fact that many, even generous Christians who are sensitive to the dramatic questions involved in the problem of liberation, in their wish to commit the Church to the liberation effort are frequently tempted to reduce her mission to the dimensions of a simply temporal project. They would reduce her aims to a man-centered goal; the salvation of which she is the messenger would be reduced to material well-being. Her activity, forgetful of all spiritual and religious preoccupation, would become initiatives of the political or social order. But if this were so, the Church would lose her fundamental meaning. Her message of liberation would no longer have any originality and would easily be open to monopolization and manipulation by ideological systems and political parties. She would have no more authority to proclaim freedom as in the name of God. This is why we have wished to emphasize, in the same address at the opening of the Synod, "the need to restate clearly the specifically religious finality of evangelization. This latter would lose its reason for existence if it were to diverge from the religious axis that guides it: the kingdom of God, before anything else, in its fully theological meaning. ..."

The meaning of the word "charity" is Love. There is no love in mere philanthropy, and certainly not in an industry masquerading as a charity. As the Venerable Fulton J. Sheen would say, "If souls are not saved, nothing is saved." CRS, CCHD and Catholic Charities USA are Catholic in name, but do very little (if anything) to bring souls to Christ. If the hierarchy of the Catholic Church is truly interested in reducing poverty throughout the world, the poverty it must begin with is the poverty of the soul.