Charles Darwin and the Catholic Church 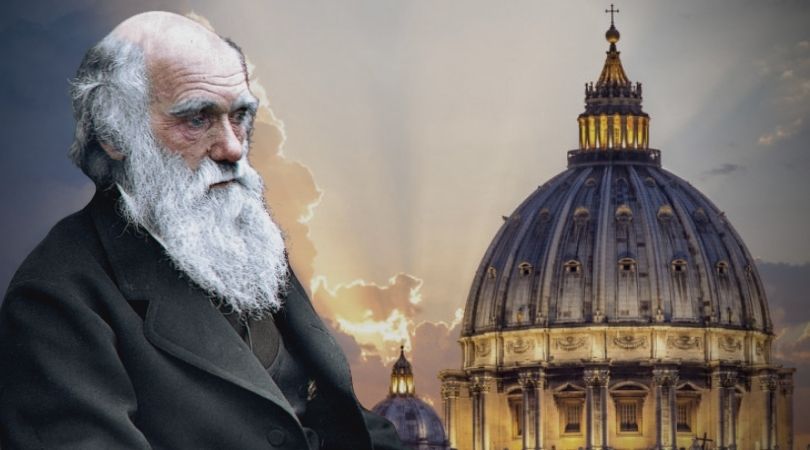 Born in England in 1809, Charles Darwin comes from the county of Shropshire. In the town of Shrewsbury, he grew up in a large Georgian home called "The Mount," where he was the second youngest of six children. For the first 27 years of his life, Charles was under the roof of his father Robert, and although he was a wealthy nonreligious doctor, he had his son Charles baptized as an Anglican.

Charles, following his father's profession, traveled north to Edinburgh, where he attended the University of Edinburgh Medical School (the best medical school in the United Kingdom at the time). His older brother, Erasmus, was already there and excited for his brother's arrival. He said, "It will be very pleasant our being together; we shall be as cozy as possible."

As Charles found himself uninterested with medical studies, he joined the Plinian Society in his second year at Edinburgh. The Plinian Society was made up of students who were materialists who attempted to challenge the Christian view of science.

Darwin's theory of evolution, laid out in his 1859 On the Origin of Species, is taught in virtually every school in America, and his ideas are widely accepted all over the world.

For more than 150 years now, Darwin's theories have sparked major controversy in religious (mainly Christian) circles. While debate on the compatibility of Darwin's ideas with Christianity continues, Darwin's own religious views are not debated. He wrote in his own autobiography: "I gradually came to disbelieve in Christianity as a divine revelation."

Darwin was heavily influenced by many thinkers — most notably Thomas Malthus and Charles Lyell.

Malthus, an Anglican cleric, is the origin of all things relating to overpopulation and population control. In 1798, he wrote the essay The Principle of Population, The Future Improvement of Society. In it, he says: "the power of population is indefinitely greater than the power in the earth to produce subsistence for man."

To solve the problem he invented, Malthus proposed "check[s] to marriage" and also mentions what he called the "preventive check."

These checks were noticed by Darwin as seen in his 1871 book, The Descent of Man, and Selection in Relation to Sex. Darwin names Malthus and his several checks, along with "keeping down the population."

Darwinian evolution has impacted every culture around the world.

Other followers of Malthus clearly understood these checks to mean birth control. This is why the Malthusian League, founded in 1877, promoted the use of contraception to limit family size. Limiting the population by means of contraception was the sole mission of the League. It acted as a precursor for the global birth control movement as seen in eugenicists Marie Stopes and Margaret Sanger. Their organizations started out as birth control facilities and currently operate as two of the largest abortion providers in the world.

Sanger, founder and also president of the American Birth Control League at the time (which formed into Planned Parenthood), even wrote this invitation in 1925: "This is the Sixth International Neo-Malthusian and Birth Control Conference."

The other strong influence on Darwin was Charles Lyell, who was also his close friend. Darwin even vented to him in 1861, saying in a letter: "But I am very poorly today & very stupid & hate everybody & everything."

Getting the Chuch 'On Board'

Lyell wrote Principles of Geology when Darwin was in his early 20s. In the book, Lyell quotes so-called scientists whose studies contradicted and invalidated Sacred Scripture. As Lyell also implied the Genesis flood never happened, he knew Christianity was his opposition and even strategized how to get the Church on board, writing to George Poulett Scrope, his best friend and colleague, in an 1830 letter: "If you don't triumph over them, but compliment the liberality and candor of the present age, the bishops and enlightened saints will join us."

While Darwin was guided by the likes of Malthus and Lyell, his own ideas influenced too many to count. The most recognized in carrying on Darwin's legacy were Thomas Huxley and Ernst Haeckel. The two were good friends with Darwin and hated the Catholic Church.

Huxley, also known as "Darwin's bulldog," said, "One of [evolution's] greatest merits, in my eyes, is the fact that it occupies a position of complete and irreconcilable antagonism to that vigorous and consistent enemy of the highest intellectual, moral and social life of mankind — the Catholic Church."

Haeckel agreed with Huxley, even saying that things like freedom and prosperity are opposed to the Catholic Church: "Either the Church wins, and then farewell to all 'free science and free thinking' ... or else the modern rational state proves victorious — then, in the 20th century, human culture, freedom and prosperity will continue their progressive development."

Along with Haeckel's disdain for the Church, he was a German eugenicist whom historians have pinned as the foundation for Nazi ideology.

In 1904 he wrote the book The Wonders of Life, which also has its mark all over Walt Disney World. In the book, Haeckel praises Darwin and also writes: "These lower races (such as the Veddahs or Australian negroes) are psychologically nearer to the mammals (apes o. dogs) than to civilised Europeans; we must, therefore, assign a totally different value to their lives."

Looking back on history, Darwinian evolution has impacted every culture around the world. It was endorsed by the founder of Marxism (Karl Marx), the leader of the Nazi party (Adolf Hitler), the head of the first Communist Party (Vladimir Lenin), and the father of American education (John Dewey).

It's also infected the Church as well, as it was endorsed by the founder of modernism (Alfred Loisy), Pierre Teilhard de Chardin (who had several of his works condemned by the Church in 1962), and Edward Schillebeeckx (who was the primary author of the infamous Dutch Catechism and whose writings were also investigated by the Vatican for heresy).

Loisy was actually excommunicated by Pope St. Pius X and, a year before that, in 1907, he wrote the encyclical Pascendi Gregis: On the Doctrine of the Modernists. In it, he defines modernism as the "synthesis of all heresies. ... [and] among the chief of their doctrines [is] that of Evolution."

Watch the full episode of Mic'd Up—Charles Darwin and the Catholic Church.