Parishioners are fighting the sale and conversion of St. Adalbert into an artistic hub

CHICAGO (ChurchMilitant.com) - The archbishop of Chicago is planning to sell a historic church, to be turned into a conservatory for the Chicago Academy of Music — and concerned parishioners are fighting the sale.

Saint Adalbert, in Chicago's trendy Pilsen neighborhood, was completed in 1914, built by Polish immigrants and maintained by the largely Hispanic community. It was designed by noted architect Henry J. Schlacks, who designed a number of Chicago's historic churches and went on to found the School of Architecture at the University of Notre Dame. If Cdl. Blase Cupich gets his way, the 102-year-old landmark will be sold to the Chicago Academy of Music, its convent converted into dormitories, its rectory turned into a living space for musicians, and its Italian marble sanctuary renovated into a stage — although critics doubt the Academy has the funds to perform a fraction of these renovations.

If Cdl. Cupich gets his way, the 102-year-old landmark will be sold to the Chicago Academy of Music, its convent converted into dormitories, its rectory turned into a living space for musicians, and its Italian marble sanctuary renovated into a stage — although critics doubt the Academy has the funds to perform a fraction of these renovations.

In plans laid out by the Academy, St. Adalbert would become a conservatory, "creating an arts-focused campus" that will serve as "a destination for artists and students from around the globe."

"CAM Pilsen is intended to create an artistic ecosystem where artists of differing skills and passions work together under one roof" — the same roof that has housed the Holy Sacrifice of the Mass daily for a century, now in danger of coming to an end.

The archdiocese announced the cardinal's decision last year to shutter St. Adalbert as part of a restructuring of six Pilsen parishes. In July, parishioners formed the nonprofit St. Adalbert Preservation Society, and filed appeals to the archdiocese against selling off the church. A canon lawyer also filed an appeal to Rome asking that Cupich's decision be reversed.

Multiple requests by the group to meet with Cdl. Cupich have gone unanswered.

Emily Nielson, co-founder of the Coalition to Save the Shrine and a Chicagoan who supports saving the parish, spoke with Church Militant. "It is disappointing that, over the past year of tireless work by the parishioners of St. Adalbert's (now the St. Adalbert Preservation Society), including raising over a million dollars and forming valuable partnerships with community groups, the archdiocese has consistently refused to meet with them," she said.

Asked how much the archdiocese stands to gain from the sale, Nielson responded, "It's impossible to know, although property values in Pilsen are rising. Proceeds from the sale of St. Adalbert's are destined for St. Paul's Parish, which ran into $10 million of debt in a recent renovation."

"The archdiocese had to cover that debt," she explained, "so selling St. Adalbert's would be a way to reclaim some lost funds."

The Preservation Society has raised about $1 million towards saving St. Adalbert, but its offer to maintain upkeep of the church has not been taken up by the archdiocese.

In a press release Friday, the Preservation Society announced the release of a video detailing the struggle for the historic church. "The move comes in the wake of fears that the beloved Pilsen landmark will be sold to this little known entity with no track record in managing major properties," the release states, "on promises that CAM will endeavor to make the church space available for 'worship.'"

"The organization the archdiocese is planning to sell St. Adalbert's to, the Chicago Academy of Music, does not appear to be financially solid (this is one reason for concern)," Nielson told Church Militant.

Blanca Torres, spokeswoman for the St. Adalbert Preservation Society, explained, "CAM is an organization without a track record and with no connection to the Pilsen Catholic community in Chicago. As near as can be determined, it has had no experience of maintaining any property, let alone a church so grand as St. Adalbert; indeed, it is not apparent that CAM has ever owned any real estate."

"Its financial stability is also an unknown," she continued, "as information about this has been withheld from the community."

Steve Wojcik, a member of St. Adalbert's Polish community, has also expressed concerns. CAM is "a group that has only been in existence for a short time, is not connected to the Catholic Church, has no history of operating a Catholic church as a place for worship," he said.

"Furthermore, we have been unable to determine what funding they have to repair and maintain the church building and the other properties," he went on.

Although the Academy says it's open to sharing its renovated space with Massgoers on Sunday, parishioners object to putting the sacred space to profane use.

There are also concerns that the property will eventually be put to what Catholic Canon Law calls 'sordid' use.

"There are also concerns that the property will eventually be put to what Catholic Canon Law calls 'sordid' use in order to sustain its financial viability," Torres said. "Finally, as the neighborhood becomes ever more desirable, the value of this unique property as a condominium or rental community is easily envisioned — the fate of so many sacred buildings around the world today."

The Academy's concerns are light years apart from that of local parishioners.

"For us, it's always been the intent to create Julliard in Chicago," explained CAM executive director Michael Scott Carter.

And CAM Creative Director Kahil El Zabar is more focused on the acoustic benefits of the church building. In his words, St. Adalbert "was built with a science of vocal sonority."

"All of the old churches in their design were made so that acoustic performances would naturally be embellished," El Zabar continued. "It's hard to find that same acoustic sensibility in new structures."

If the sale goes through, the Academy plans to host a jazz concert in the church on February 28. "The Ethnic Heritage Ensemble returns home to wrap up their tour at the new home of Chicago Academy of Music," reads the description. "Doors open at 6:30 / show starts at 7. $15 advance / $20 day of."

"The Archdiocese has been positing a false dichotomy in which a sale to CAM is presented as the only alternative to demolition," Nielson told Church Militant. "In fact, the St. Adalbert Preservation Society, in all likelihood, is in a stronger financial position than CAM, which has never before owned a building."

Wojcik said, "We are asking the archdiocese to keep its guarantee that the church will be maintained as a sacred site for Catholic worship in accordance with church rules for us and everyone else who wants to attend Mass at St. Adalbert's in the future as they said they would."

The Preservation Society also notes the double standard of the archdiocese, which is using an image of St. Adalbert's "iconic towers and graceful façade" to help raise millions for its capital campaign, all the while planning to sell it off to a secular group.

"That the archdiocese should use this beautiful church's image to attract donations while simultaneously seeking to sell it away from its dedicated parishioners shows a cynicism of the deepest order," Nielson remarked. "It is only more heartbreaking that a number of the faithful most committed to St. Adalbert's are the direct descendants of the people who built it in the first place."

Learn more about St. Adalbert in this extensive Q&A. 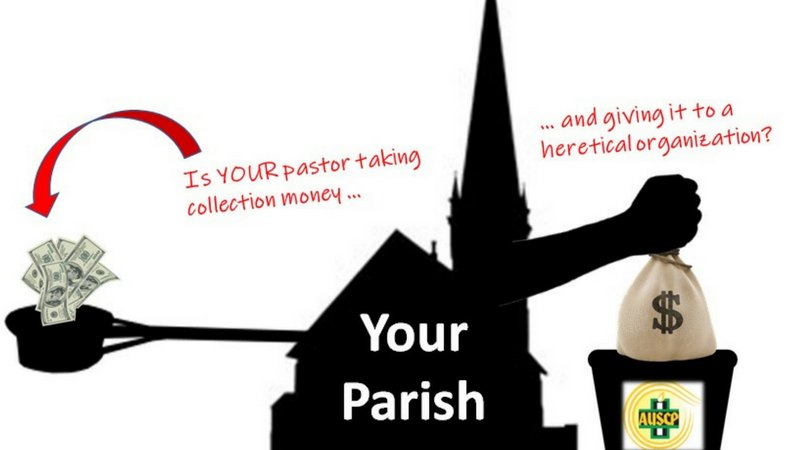 Fleecing the Flock: Is Your Parish Giving Money and Support to the AUSCP?
By Michael Hichborn   •   0