Bishop of Rancagua apologizes for not acting sooner

RANCAGUA, Chile (ChurchMilitant.com) - A bishop in Chile is suspending a dozen priests accused of sex abuse.

Bishop Alejandro Goić Karmelić, head of the diocese of Rancagua and former president of the Chilean bishops' conference, announced on May 19 he was suspending the 12 clergy.

This comes days after Pope Francis rebuked the bishops of Chile for mishandling priestly misconduct. In response, all Chile's 34 bishops offered to resign, leaving their positions in the hands of the Holy Father.

Of special emphasis was the case of Fr. Luis Rubio Contreras, accused of preying on minors. In a statement from May 19, Bp. Goić brought up the accusations against Fr. Rubio and said, "I would like to ask forgiveness for my actions in this case."

Bishop Karmelić made the announcement after Chilean television and news outlet T13 shed light on the allegations against Fr. Rubio. A T13 video report even showed Fr. Rubio admitting he had sent explicit photos to a Facebook account that appeared to belong to a minor. The account was actually a fake, used to catch Fr. Rubio.

Bishop Goić's decision followed his return to Chile after a three-day meeting in Rome with Pope Francis. The Pope organized last week's emergency meeting with the bishops of Chile to discuss the priest sex abuse scandals in their country.

Earlier this year, the Pope sparked anger with his response denying allegations that Chilean Bp. Juan Barros protected a sexually abusive priest. During this year's trip to Latin America, the Holy Father sided with Bp. Barros, claiming his accusers lacked evidence and were smearing the Church.

The Pope's handling of the Bp. Barros scandal was one of the subjects of last week's meeting.

I would like to ask forgiveness for my actions in this case.

Also a subject of discussion was a 2,300-page report on the priest sex abuse crisis in Chile. Recently produced by Maltese Abp. Charles Scicluna and Spanish Msgr. Jordi Bertomeu, the lengthy report is the result of a series of Church investigations. This document has not been made public.

During last week's emergency meeting in Rome, the Holy Father blasted Chile's bishops for sheltering abusive priests. This was manifest in a leaked 10-page memo from the Pope to the Chilean bishops.

According to the leaked document, some bishops in Chile went so far as to hide information about clerical sex abuse from civil authorities.

In the letter, the Pope claims that the crisis in the Church in Chile cannot be fixed simply by "addressing the concrete cases and reducing them to the removal of people; this — and I say this clearly — must be done, but it's not enough, we must go further."

Bishop Goić's new move to suspend 12 priests is being interpreted as a response to the Pope's desire for reform in the dioceses of Chile.

In a different letter from the emergency meeting — a letter the Vatican officially released to the public — Pope Francis instructed Chile's bishops to work towards "a prophetic Church, capable of putting at the center what's important: service to her Lord in the hungry, the imprisoned, the migrant, the abused." 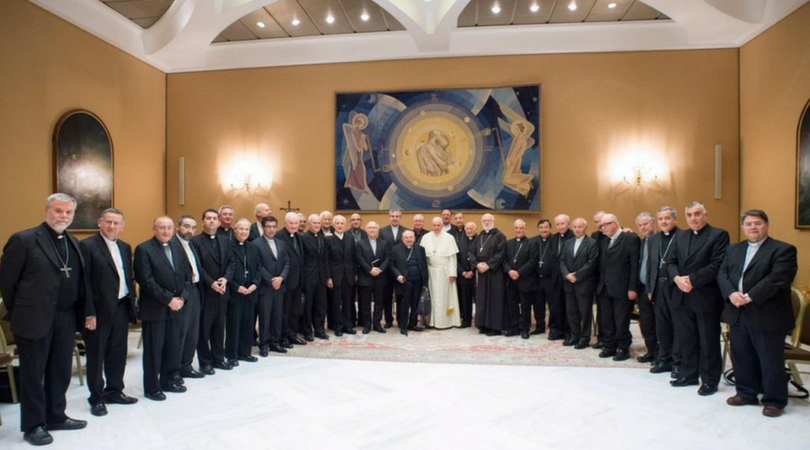