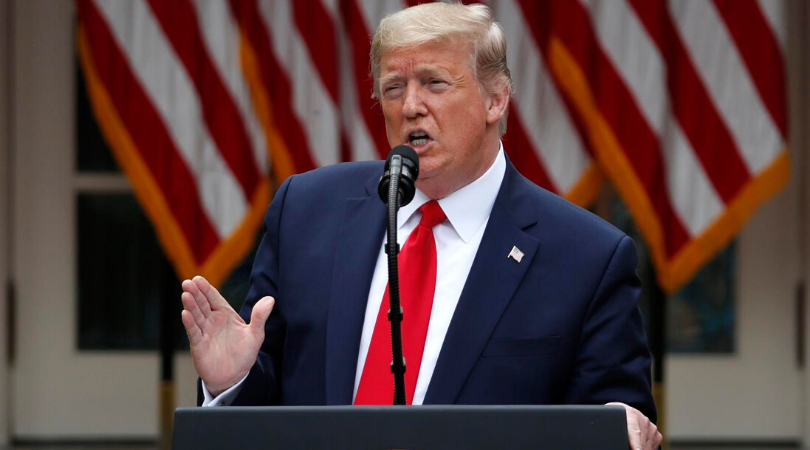 Trump announced on Friday the United States is permanently severing relations with WHO, which resisted Trump's Jan. 31 restrictions on travel with virus-plagued China. The decision deprives WHO of more than $450 million in U.S. funding.

"China has total control over the World Health Organization," observed the president.

He added, "Because they have failed to make the requested and greatly needed reforms, we will be today terminating our relationship with the World Health Organization and redirecting those funds to other world-wide and deserving urgent, global, public health needs."

Steven Mosher, president of Population Research Institute and an expert on China, told Church Militant that WHO was absolutely complicit in helping China spread the Wuhan virus.

"The WHO is a co-conspirator with the Chinese Communist Party in the cover-up that has cost 100,000 American lives, and counting," Mosher remarked.

China's corruption of WHO, said Mosher, doesn't end with WHO's Director-General Tedros Adhanom Ghebreyesus, a pro-communist with a history of covering up epidemics.

"The problem is not just with Dr. Tedros, but the entire leadership of the WHO, including the official who led the WHO delegation to China and the head of WHO's office in Beijing," Mosher commented. "They all lied about the severity and transmissibility of the Chinese Virus and misled the world."

The health agency of the United Nations (UN) was further complicit with China in sidelining Taiwan owing to the country's success in containing the pandemic, according to Mosher.

"Because of pressure from Beijing, the nation that was the most successful in containing the spread of the disease — Taiwan — has not only been barred from the WHO, but the WHO also refused to share information about Taiwan's best practices with the other nations of the world," he noted. "This cost additional lives. Enough is enough."

The WHO is not the only UN agency corrupted by Chinese Communist Party (CCP), affirmed Mosher.

"The CCP has corrupted a number of UN and international agencies whose competence and objectivity can no longer be relied upon," he related.

It's in their very nature to be tyrants.

Trump's ending of US relations with WHO grows out of his decision in April to freeze U.S. funding of WHO pending an investigation into what Trump called WHO's "China-centric" response to the Wuhan virus. Friday's announcement came as a result of WHO resisting this investigation and the resulting reforms," according to Trump.

Trump on Friday not only called out China for its "total control" of WHO but also for recently extending its control over Hong Kong. The announcement to end a multifaceted special status of the former British territory was Trump's response to Thursday's approval by China's legislature of controversial security laws affecting Hong Kong's autonomy.

The New National Security Law passed by the Communist Party's rubber-stamp parliament is an attack on all those civilizational advances that Great Britain bequeathed to Hong Kong and the world: its independent legislature, its independent judiciary, freedom of the press, and individual freedoms.

Hong Kong's pro-democracy legislator Claudia Mo agrees with critics that China has delivered a "killer blow to the city's autonomy and freedoms.

"Hong Kong as we knew it is finally dead," said Mo.

Trump said that China's recent move extends the reach of China's evasive state security apparatus into what was formerly a "bastion of liberty."

The president spoke of China's increasing dominance over Hong Kong since Britain turned the territory over to Chinese care in 1997.

"China has replaced its promised formula of 'one country, two systems' with one country, one system," related Trump.

"Hong Kong is no longer sufficiently autonomous to warrant the special treatment we have afforded the territory since the handover," clarified Trump.

Mosher described how China's dire law bolsters the CCP's ever-increasing demand for an almost God-like adherence from its citizens.

"It is also, in one sense, an anti-blasphemy law," he explained. "Anyone who says anything against the mighty Chinese Communist Party, its leaders, its flag, its anthem, etc., will be accused of committing a kind of secular blasphemy. That is the end of the freedom of speech."

Because of this control, Trump declared he would begin rolling out what critics have called the "nuclear option" in revoking Hong Kong's special status.

"Therefore, I am directing my administration to begin the process of eliminating policy exemptions that give Hong Kong different and special treatment," stated Trump.

This is the process of the great decoupling. It's going to be a bifurcation of the world economy into two spheres of influence.

This move would be the end of Hong Kong's economy, said Diana Choyleva, chief economist at Endo Economics. This would impact more than 300 U.S. companies that have regional headquarters in Hong Kong, Choyleva said. She also sees it leading to a massive rift between China-centered economies and economies centering on the United States.

"This is the process of the great decoupling," she added. "It's going to be a bifurcation of the world economy into two spheres of influence," Choyleva predicted.

Commentators who say China will stop attacking Hong Kong's autonomy to stave off economic fallout simply don't understand China," asserted Mosher. He went on to describe China as the proverbial scorpion in one of Aesop's fables.

"You may remember the Aesop's fable about the frog that offered to carry the scorpion across the river," related Mosher. "Halfway across, the scorpion stung the frog, which demonstrated that they were now both going to die."

Driving his point home, he said, "The scenes that we are seeing in Hong Kong of protesters tear-gassed, pelted with pepper balls, arrested, bloodied and beaten are only going to intensify over time," predicted Mosher. "The Communists just can't help themselves. Like the scorpion, it's in their very nature to be tyrants."