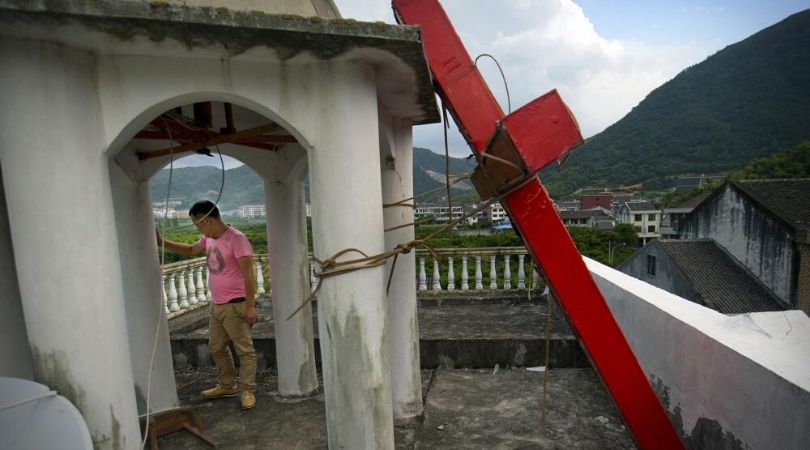 ANHUI PROVINCE, China (ChurchMilitant.com) - In less than three months, the Chinese Communist Party (CCP) has destroyed more than 500 crosses in a 300-mile stretch from China's Zhejiang to Anhui provinces.

The CCP's aggressive campaign to remove crosses in eastern and central China began in October 2018, one month after the secretive Vatican-China accord was reached in September 2018, and shows no sign of slowing down.

An underground Catholic priest in Anhui explained that the faithful were able to build churches and hold events prior to the more recent crackdown despite the CCP's suppressive rules. "Now crosses are demolished and church activities are restricted."

Last summer, Cdl. Joseph Zen, bishop emeritus of Hong Kong, told Church Militant, "Before there was an agreement, there was a kind of compromise on many points. For example, the underground Church could have their church buildings and the underground priests, even in the cities, could say Masses for the faithful, even though the law is against that."

"But the authorities, for a long time, never enforced those laws. Now, they enforce those laws. So, it is a much harsher persecution after the agreement; it is terrible," he added.

The underground priest reported all crosses in their churches had been removed.

Father Joseph, another underground cleric, is urging parishioners to protect the church's cross. He has been negotiating with authorities to leave the cross in place, since the church is in an area popular with tourists.

"Many tourists visit this area. If the cross is torn down, it loses the symbol of our church and the sign of Christianity," said Fr. Joseph.

The priest reports that his bishop, Joseph Liu Xinhong of the Anqing archdiocese in Anhui, said to take pictures as evidence in the event the cross is torn down.

"The bishop expressed his inability to face the authorities. After all, it has always been under the control of the government and Bp. Liu has no say in it," he added.

"The clergy in Anhui don't want to cause trouble. They are afraid of the government," said Paul Lee, a Protestant preacher in the region.

He said all the crosses in Suzhou City in the northern part of Anhui province have been removed, with the exception of one at a century-old heritage church.

A Christian in Hefei, the capital of and largest city in Anhui, said, "After the crosses were torn down in Zhejiang, the CCP is spreading its game to other parts of the country."

"They can do whatever they want," he added.

In what he called a "total sellout" of the underground Church, Cdl. Zen explained in February to Church Militant that the clandestine 2018 Vatican-China accord was the first step in that sellout. The second step was legitimizing seven excommunicated bishops, asking the legitimate bishops to step down. Finally, "last June [2019] came out that document — the so-called pastoral guidance encouraging people to join the [Catholic] Patriotic Association," constituting the third step.

According to Abp. Claudio Maria Celli, former president of the Pontifical Council for Social Communications (2007–2016) who helped craft the provisional 2018 accord, the Holy See will most likely renew the deal come September.

"The Catholic Church in China must be fully Chinese, but fully Catholic! There are no discounts to make," he said on Italian television. "The deal is an interim deal, which expires, as you said, in September of this year. We have to find a formula. We have to see what to do after this deadline. I think we should probably reconfirm it for one or two years."

"On our journey, we must all be faithful to the gospel. It is not an easy path, but it seems to me that we have embarked on a respectful path trying to understand each other," he continued, "to see how to still resolve those knots that remain and those situations that undeniably leave [us] much more than thoughtful, I would say worried. However, we must carry it forward."

Pope Francis has yet to offer any words of guidance or comfort to the underground Church as the CCP continues to remove crosses and ramp up persecution of Christians.