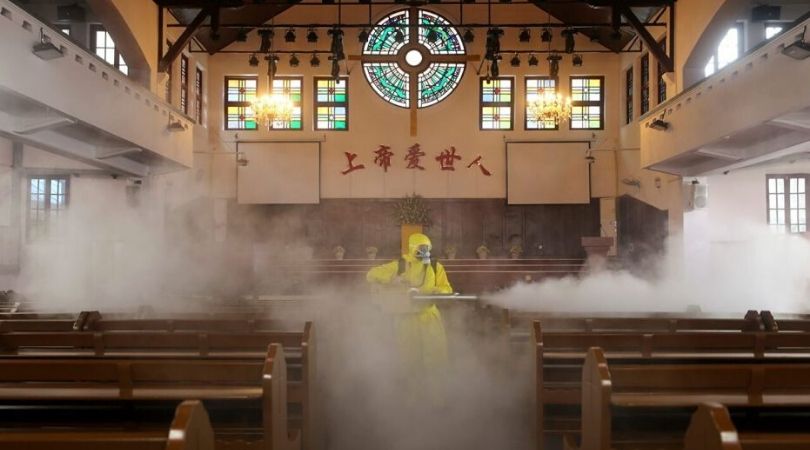 ZHEJIANG PROVINCE, China (ChurchMilitant.com) - The Chinese Communist Party (CCP) is continuing to ratchet up its control of the Catholic Church in China, now requiring priests to preach a gospel of patriotism in order to operate.

In some areas, as a precondition for the reopening of churches — which have been closed for five months due to the Wuhan pandemic — priests are being required to preach on patriotism, as per an order issued jointly by the Chinese Catholic Patriotic Association and the Chinese Catholic educational administration committee.

As of June 2, church services may resume in Zhejiang assuming "religious places" meet conditions of pandemic prevention and assuming priests agree to the patriotism requirement.

Father Liu of Hebei told Union of Catholic News (UCA News) that although the reopening of churches is a good thing, it is "wrong" to be required "to teach a good lesson on patriotism."

"As members of the universal Catholic Church, we cannot accept and glorify what communists consider patriotic education," the priest said.

A parishioner in Wenzhou, a port city in the Zhejiang province, said the government's move "has seriously interfered in the internal affairs of religion."

As members of the universal Catholic Church, we cannot accept and glorify what communists consider patriotic education.

With the CCP's credibility taking a hit for its response to the Wuhan virus and amid economic slowdowns at home and abroad, the Chinese Communist Party (CCP) "is afraid of a counterrevolution," says an observer in China needing to remain anonymous. "So they want people to hold on to patriotism."

This observation is backed up by co-author of How China Sees the World: Han-Centrism and the Balance of Power in International Politics Bradley Thayer.

In an article "The Chinese Regime Is Not Legitimate," Thayer makes the case that the CCP is deeply concerned about its own legitimacy — and the perception of its legitimacy among the Chinese people — "so it rules through its monopoly of power and intense and efficient control of the Chinese people."

"From its illegitimacy comes insecurity, and so repression flows," he reasons.

Thayer predicts the repression will not only continue but "is likely to worsen."

The CCP's all-pervasive surveillance system "prevents protest movements from being successful other than in rare and local circumstances," he says, adding, "There is no hope of reform movement within the CCP" as occurred in the Soviet Union with "Gorbachev's glasnost and perestroika."

In fact, Thayer says the CCP learned from the Soviet Union's "mistake," framing it as "an example of what it must never do."

Indeed, freedom of religion becomes more and more constricted throughout China, and the subservience of the Catholic Church to the Chinese state intensifies with reports coming out daily of new and more brutal instances of oppression.

The Vatican is remarkably silent on the persecution of Chinese Catholics, which has increased by all accounts after the 2018 China-Vatican accord. The substance of the report, brokered by disgraced former prelate Theodore McCarrick, remains unknown to this day, putting Chinese faithful seeking to be true to the Church of Rome in an even more vulnerable position.

The world should lament the suffering of the Chinese people, and lamentation should be followed by action to aid China's population.

According to Thayer, "The world should lament the suffering of the Chinese people, and lamentation should be followed by action to aid China's population."

To assist the Chinese people, he says, what the international community must not do is "bolster the CCP's claims of legitimacy." The Chinese people must determine the political legitimacy, likely preferring, he says, a "form of representative democracy."

Meanwhile, the people of the Wenzhou diocese look forward to returning to Holy Mass and receiving the sacraments, it is being reported. One parishioner said his parish is in ready mode, having already purchased safety items such as temperature checkers, masks and disinfectant.

To ensure that all people who wish to attend Masses can attend despite number restrictions, some parish priests have decided to increase the frequency of daily Masses.