WASHINGTON, D.C., May 6, 2015 (ChurchMilitant.com) – A Chinese attorney is claiming the death toll from China’s one-child policy has reached into the hundreds of millions.

Chen Guangcheng, a blind Chinese activist and attorney, spent four years in prison for criticizing China’s abusive population control program, officially adopted in 1979. Over the course of 35 years since its implementation, the one-child policy has seen numerous forced sterilizations and abortions. Others have documented the horrors endured by Chinese women — especially the poor living in rural areas — whose menstrual cycles are vigilantly charted by family planning officials. If it's discovered the women are pregnant with a second child, they are fined. Those who can't pay the fine are often arrested and forced to undergo abortions against their will. 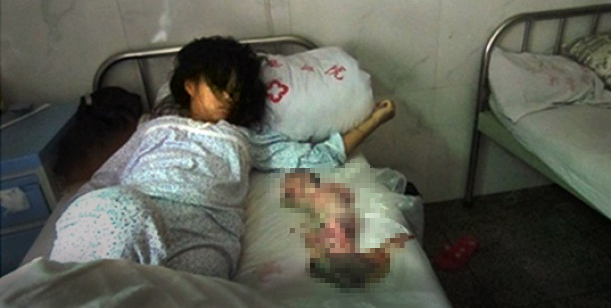 After enduring house arrest, during which Guangcheng was beaten and his family mistreated, he escaped to the United States in 2012, where he is currently senior fellow at Catholic University of America. He testified before Congress Thursday at the Executive Commission on China. “Over the past 35 years, China has killed a total of 360 to 400 million young lives as a result of its inhumane and violent birth control policies.”

“During a six-month period of 2005, more than 130,000 forced abortions and/or sterilizations took place in Linyi city alone. More than 600,000 family members suffered during this period.”

He continued, “This brutality and these crimes against women and their families have wrought irrevocable physical, spiritual and psychological harm.”

Guangcheng offered graphic descriptions of botched late-term abortions where babies are killed after they're delivered, either by drowning or breaking their necks.

Chinese women have confirmed the brutal practices of family planning officials. One woman who exceeded her limit of children says she was forcibly dragged to the local clinic, strapped down onto a table and her abdomen injected with a lethal solution.

For two days she writhed on the table, her hands and feet still bound with rope, waiting for her body to eject the murdered baby. In the final stage of labor, a male doctor yanked the dead fetus out by the foot, then dropped it into a garbage can. She had no money for a cab. She had to hobble home, blood dripping down her legs and staining her white sandals red.

Steven Mosher, president of the Population Research Institute, was the first American social scientist allowed to conduct a full-lenth study of a village in mainland China. He witnessed firsthand the abusive practices of China's coercive population control policy.

I became an eyewitness to every aspect of this draconian campaign. I went with young women to family planning “study sessions” and saw them harangued and threatened by senior Party officials. I followed them as they were taken under escort to the commune clinic and watched — with the permission of local officials who were eager to demonstrate their prowess in birth control to a visiting foreigner — as they were aborted and sterilized. 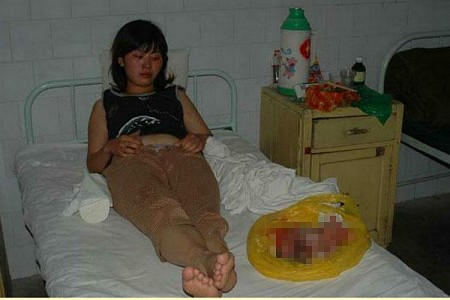 Women's Rights Without Frontiers, an initiative founded by Reggie Littlejohn to stop China's coercive one-child policy, includes testimony of Chinese women who have undergone forced abortions at the hands of government officials. The woman pictured in the image on the right testified to the following:

They and some doctors and nurses pushed me onto the ground and took my pants off. Then they injected some medicine at my fetus' location in my belly, and then they roped me onto a sickbed. I could not resist this and nobody came to help me. I could not imagine that this brutal and bloody behavior could happen in the civilized 21st century.

At 3:00 a.m., on April 2nd, my almost-fully-developed child was born. My child even mournfully cried for some minutes, and later the crying ceased. ... When I woke up in the morning, there was a doctor standing by my bed and asked for money to “get rid of the fetus' body.” I said I had no money and so they just used a plastic bag to wrap my baby and put it beside me.

Although China claims it has eased up on its population control policy by now allowing two children per family, activists claim this is merely a publicity campaign for the purposes of damage control, after disturbing images of Chinese mothers mourning their aborted children were leaked and caused international outcry.

Learn more about China's coercive family planning campaign and how you can help Chinese families here.