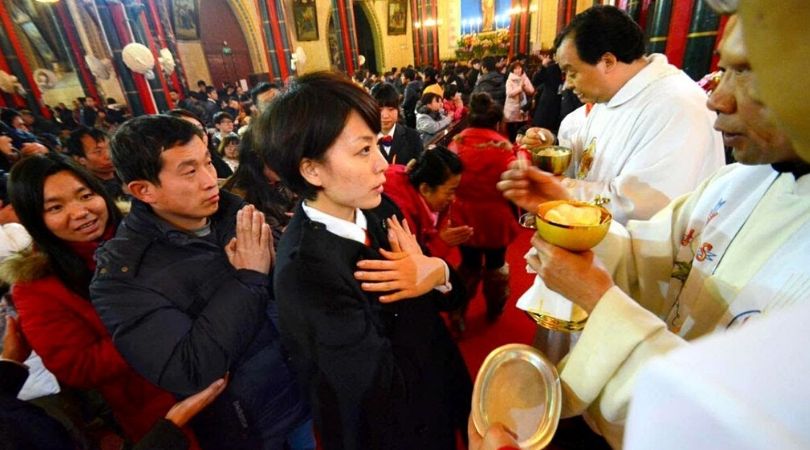 BEJING (ChurchMilitant.com) Government officials are cracking down on Catholic churches in China, forcing them to replace religious images with portraits of the Communist president.

A Catholic Church in the city of Ji'an in the southeastern province of Jiangxi was built this year for more than one million RMB (over $ 140,000). All the money had been raised by believers. The church was named "The True and Original Source of the Universe" (萬有真原), which is a reference to the name inscribed on a plaque the 17th-century Kangxi Emperor donated to a Catholic church in Beijing in 1711.

Not long after it opened its doors, this parish became the target of the local government's persecution.

In late September, local officials ordered the congregation to paint over the name of the church and replace it with the words "Follow the Party, Obey the Party, and Be Grateful to the Party." Additionally, the national flag was ordered to be flown at the entrance of the church.

The government also ordered the removal of a painting of the Virgin Mary, St. Joseph and the Child Jesus from the center of the church, replacing it with a portrait of President Xi Jinping. Now, upon walking into the church, the first sight is that of the head of Xi, surrounded by propaganda slogans on the wall on either side.

The picture of the Holy Family has been relegated to a dark corner of the church.

A few days later government officials confiscated the church building and locked all its doors and windows, possibly preparing to transfer it to a Chinese Patriotic Catholic Association, government-run church. Catholics who built their church building with their own private funds lost their place of worship.

Also in September, in Jiangxi's Poyang county, a Catholic meeting venue was ordered to cease all religious activities. The church's cross, a painting of the Virgin Mary and religious couplets were removed, and portraits of Xi Jinping and Mao Zedong replaced them.

In the same month, in the Linchuan district of Jiangxi's Fuzhou city, local officials ordered the congregation of the state-run St. Joseph's Cathedral to display slogans outside the building supporting traditional Chinese culture. Rather than a sacred place for divine worship, the church building now resembles a government propaganda agency.

The goal of the government is to "transform believers in religion into believers in the party," reported the South China Morning Post.

In early May, another Catholic venue in Poyang county was shut down on the grounds that "any church refusing to join the Chinese Patriotic Catholic Association (CPCA) is a xie jiao."

Xie jiao can be translated as an illegal, unorthodox, deceptive religious organization or cult.

Congregation members said they would rather worship at home than join the state-run Church. The CPCA clergy proclaimed their support for the Party leadership, love for the country and religion, pledging "to contribute their share to realize China's Dream — the great renewal of the nation."

A local retired priest from the northeastern province of Jilin spoke about the government-run Church: "Falling under communist control is a calamity to the Church. Joining the CPCA is equivalent to handing oneself to the devil."

He chose to retire because he refuses to undergo government indoctrination nor will he willingly allow himself to be used to indoctrinate believers.

The South China Morning Post reports that Communist Party of China (CPC) officials visited believers' homes in Yugan county of Jiangxi province, a poor area where around 10% of the population is Christian. They were urged to replace personal religious displays with posters of President Xi Jinping.

Though the party denies it, some Christians in Yugan county say they were told they would not be eligible for government assistance unless they took down their religious posters. One family's home had "God loved the world" inscribed above a gate on their property. The government forced them to change the quote from John 3:16 to "Family harmony leads to thousand-fold prosperity."

More than 600 homes removed Christian symbols from their living rooms, and 453 replaced them with portraits of the Communist leader.

The church's cross, a painting of the Virgin Mary and religious couplets were removed, and portraits of Xi Jinping and Mao Zedong replaced them.

China has seen an uptick in persecution of Christians as President Xi Jinping consolidated power and abolished term limits.

The U.S. Commission on International Religious Freedom made it clear that the worst violator of religious freedom is China: "As a Christian, your Bible may have been rewritten by the Chinese government, your church shuttered or demolished, and your pastor imprisoned. As a human rights defender who works to protect people targeted for their faith, you may be arrested, or worse, disappeared."