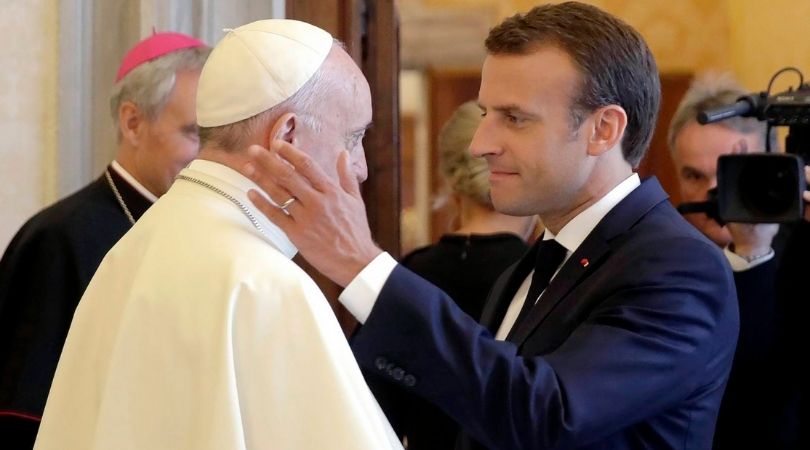 PARIS (ChurchMilitant.com) - Churches will not be subject to draconian vaccine passport restrictions under the new French health regime announced by President Emmanuel Macron in a televised address Monday.

The new regulations, enforced from July 21, will require individuals over the age of 12 to produce a health pass to enter a shopping center, cinema, theater, museum, concert, show, festival, theme park or amusement park.

"Our choice is simple: to put the restrictions on the unvaccinated rather than on all. This is the meaning of the health pass that will be extended," the French president declared. "We must vaccinate all of France."

From August, no one will be allowed to enter a restaurant, café, shopping center, hospital or board public transport without a health pass.

In September, vaccines are to be rolled out for middle school and high school pupils. Macron said he would impose a cost on future COVID-19 tests, unless accompanied by a doctor's prescription, to "encourage vaccination rather than multiple tests."

Those attending "places of leisure and culture" with more than 50 persons present will be forced to show a vaccine certificate or proof of a recent negative COVID-19 test. Macron said that the purpose for such restrictions is to "push a maximum of [the French public] to go and get vaccinated."

France's cathedrals and churches are also considered "places of culture," with thousands of visitors and worshippers queuing up daily to enter world-renowned shrines like Chartres Cathedral or Notre-Dame Cathedral in Paris, which has been temporarily closed.

However, "churches and their worship were not mentioned in the list of places that will require the health pass for access during the president's announcements," the Bishops' Conference of France (CEF) clarified in a statement Tuesday.

These draconian measures take France into a new realm of lunacy altogether.

"Concerned about the common good, the CEF continues to invite everyone to mobilize against the virus and calls on Catholics to enter into this perspective by taking their own responsibility vis-à-vis the vaccine," bishops said.

Denis Moutel, bishop of Saint-Brieuc and Tréguier, insisted Catholics should "take responsibility, that is to say, choose to be vaccinated," if they had not yet done so.

Church Militant spoke to faithful Catholics in France who lamented the totalitarianism of the new regulations.

"I've felt so angry since I heard our dictator speaking on TV last evening. I know many people do," a Catholic mother from Burgundy said. "My daughter works with children; my sons are in the army; my husband is flying abroad for work. They are forced to take the jab."

In comments to Church Militant, France-based theologian Fr. Athanasius St. Michel said, "It is very much to be hoped that the Catholic bishops resist all attempts of the State to impose passports, vaccine or any other kind, on the faithful, in ways which may both violate their consciences and hinder their access to the sacraments."

The French might have the liberty to refuse the vaccines, but they will risk losing their jobs, forfeiting the right to travel or buying food.

Macron has not ruled out extending the regulations to churches, clergy sources admitted, and the bishops were waiting to see the rules in print before they could comment further.

"Depending on the evolution of the situation, we will ask ourselves the question of the extension of the health pass to other activities," Macron observed.

In "practical terms," the vaccine "will not only be compulsory but it will be impossible to conduct a normal life without it," French expert Jonathan Miller wrote in The Spectator. "The police will be unleashed from September to enforce the new rules."

"All this appears a prelude to a two-tier society in which liberty and equality is [sic] being jettisoned without much debate," remarked Miller, calling Macron's address "the most authoritarian speech delivered by a French president in decades."

"The French might have the liberty to refuse the vaccines, but they will risk losing their jobs, forfeiting the right to travel or buying food. Those with vaccine passports will certainly be 'more equal' than those without," he emphasized.

From mid-September, health workers will be checked for vaccination, and those not injected with the experimental jab will be prohibited from work with pay suspended.

All this appears a prelude to a two-tier society in which liberty and equality are being jettisoned without much debate.

"The new restrictions that Macron has announced in France are concerning," tweeted pro-vaccination European media director of Human Rights Watch Andrew Stroehlein, warning that "some of the new proposals go too far."

"These draconian anti-COVID measures take France into a new realm of lunacy altogether," columnist James Delingpole wrote, wondering how the land with "liberty" in its national slogan could "allow itself to become just another spavined satrapy of the globalist technocratic elite's biosecurity state panopticon nightmare vision of the very near future."

France's episcopate has remained silent at the draconian invasion of civil liberties and continues to refuse to allow Catholics to receive Communion on the tongue.

"The CEF considers that the current rules remain valid: namely, the use of hydro-alcoholic gel, the wearing of a mask and any other health measure related to the practice of worship," the bishops noted.

French newspaper Le Figaro remarked that the CEF "does not wish to take a firm position on vaccines — no doubt aware that part of its flock remains vaccine-skeptical — unlike the Vatican and Pope Francis, who have clearly taken a position in favor of vaccination."

Only 40% of France's adult population have chosen to take the experimental jab, with 53.1% having had at least one shot. The nation is bracing for widespread civil unrest in the wake of Macron's mandatory vaccine absolutism.