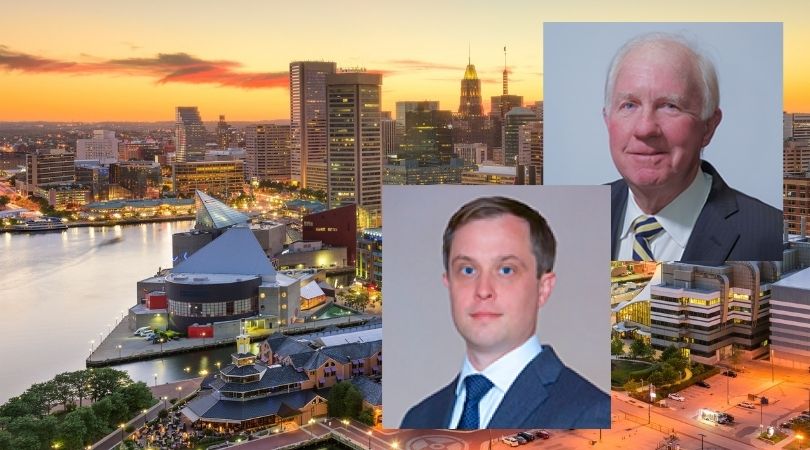 BALTIMORE (ChurchMilitant.com) - As Baltimore City doubles down on false claims Church Militant is linked to violence, using it as a pretext to cancel this apostolate's November bishops' protest, Church Militant is fighting back, exposing falsehoods and anti-Catholic bigotry in Baltimore's legal arguments.

"Defendants have provided no factual basis or evidence that any violence might occur at Plaintiff's rally — and no support for the notion that Plaintiff would cause enough violence to disturb a poorly positioned wine glass, much less enough to warrant a suspension of the First Amendment," argued Attorney Marc Randazza in a reply brief filed Sept. 27 on behalf of St. Michael's Media (SMM).

As Church Militant previously reported, SMM sued the city of Baltimore after it abruptly canceled this organization's Bishops: Enough Is Enough prayer rally, scheduled for Nov. 16 at the MECU Pavilion in the Inner Harbor.

The pavilion is directly across from the Baltimore Marriot Waterfront Hotel, in plain view of the U.S. bishops and the second-floor conference room where they are holding their annual meeting. The choice of location is deliberate and an essential part of the message, as abuse victims and concerned Catholics have been made to feel invisible and unheard by their bishops, who are notoriously difficult to reach; the MECU Pavilion affords the perfect opportunity for Catholics to be made both visible and heard by their spiritual shepherds.

Church Militant held the same rally at the same location in 2018 without incident.

Baltimore City Solicitor James Shea admitted to Church Militant CEO Michael Voris during an Aug. 6 phone call he authorized cancellation of the rally based on unspecified allegations this organization is "tied" to the Jan. 6 Capitol protests — claims Church Militant vehemently denies. When pressed to offer evidence, Shea refused, admitting he had not seen any evidence himself but that staff members had come to him with "concerns."

Church Militant has since learned that Michael Huber, chief of staff for Mayor Brandon Scott, made a phone call to managers of the MECU Pavilion on July 19 ordering it to cancel Church Militant's rally.

Failure to Offer Proof of Ties to Jan. 6

In its court filings, the city has been unable to provide any evidence of ties to Jan. 6. The extent of its "evidence" set forth in a Thursday memo was reference to a Church Militant Post-Election Special in which Voris reported on the events of that day.

Through selective and dishonest editing and quoting the broadcast out of context, the city tries to portray Voris as a proponent of violence, "glorifying" the rioters — ignoring segments in that same broadcast where Voris promoted peaceful protest and nonviolence.

The video approvingly quoted former President Trump's calling on everyone involved to be peaceful, highlighted Catholics peacefully praying the "Our Father" on the Capitol lawn, and pointed out the hypocrisy of those who condemned the events of Jan. 6 while refusing to condemn the nationwide violence caused at Antifa and Black Lives Matter events, which St. Michael's has routinely denounced.

In any case, the city was unable to provide any actual connections, in spite of Shea's claims in the Aug. 6 phone call, between Church Militant and the Capitol protests.

Defendants do not argue that St. Michael's spurred anyone to violence, or to participation in the events of that day, nor could they. Defendants' position appears to be that since Voris had an opinion they do not like, the whole rally should be censored. This is a stunning admission of unconstitutionality which should, by itself, justify the requested injunctive relief.

The SMM reply brief continues, "Tellingly, Defendants do not even attempt to identify the source of this claim [of alleged "ties" between SMM and Jan. 6] and do not bother to repeat it in their Opposition. This calls Shea's credibility into question."

This is a stunning admission of unconstitutionality which should, by itself, justify the requested injunctive relief.

In an attempt to change the narrative, after failing to find any actual evidence linking Church Militant to Jan. 6, Shea claimed in an affidavit filed Sept. 23 he had mentioned concerns about "the speakers for the event" during his Aug. 6 phone call with Voris.

Shea also claimed in his affidavit, "I have not had any contact or discussions with representatives of the Catholic Church or the United States Conference of Catholic Bishops (USCCB) related to the November 16 event and those groups have played no role whatsoever in the decision not to move forward with the Church Militant event."

This contradicts what Shea told Voris in their Aug. 6 phone call:

At one point, I said to him plainly, "No one would want our event cancelled except the U.S. bishops. No one would profit from it or have a motive. Did you receive a communication from anyone in the USCCB or anyone related to them asking you to cancel the event?"

His response was: "I can neither confirm nor deny that."

I responded, "Well, you just answered the question."

Thus while Shea refused to deny the claim outright in a private phone call with Voris, he later signed an affidavit contradicting himself.

As chairman emeritus of Venable, LLP, a large law firm that serves as legal advisor to Catholic Relief Services, the international charity run by the U.S. bishops, Shea legally represents the USCCB. His decision to cancel Church Militant's rally protesting the bishops as a possible favor to the bishops is a clear conflict of interest.

Unable to prove any ties between Church Militant and Jan. 6, the city hinges much of its argumentation on the fact of Steve Bannon and Milo Yiannopoulos' presence as speakers at the Nov. 16 rally, citing biased and inadmissible media reports claiming both men promote violence, as well as previous speaking engagements where violence erupted.

This, however, is a textbook example of a "heckler's veto," i.e., canceling an event over fears of reactions the speech might provoke — something the U.S. Supreme Court has repeatedly ruled unconstitutional.

"Defendants support this heckler's veto, but the First Amendment does not," the reply brief notes.

"Defendants' restriction on Plaintiff's speech is based on the past unpopular viewpoints of St. Michael's [Media] and two of its scheduled speakers, specifically that their speech will give such offense to third parties that these third parties will become violent," it continues.

Imagine if all a white supremacist needed to do to end a "Black Lives Matter" rally would be to get very angry at the content of the rally. Would the City do what it is doing now, or would it abide [by] its duty to suppress the threat, but permit the rally? This analogy is apt, as the City's argument is that third parties will instigate violence in response to the predicted content and viewpoint of the speeches. Rather than protect St. Michael's from such alleged violence, Defendants wish to prevent St. Michael's from speaking.

Church Militant even offered to remove Bannon and Yiannopoulos as speakers, but the city refused this compromise, undercutting the very justification for canceling the rally.

This organization also offered the city the chance to review all speeches in advance; the city also refused this offer.

The city ignores the 14 other speakers at the Nov. 16 rally, which include Fr. James Altman, McCarrick victim James Grein, Catholic speaker Patrick Coffin and many others.

Both Bannon and Yiannopoulos have agreed to take the stand at the Sept. 30 court hearing to respond to the city's allegations. 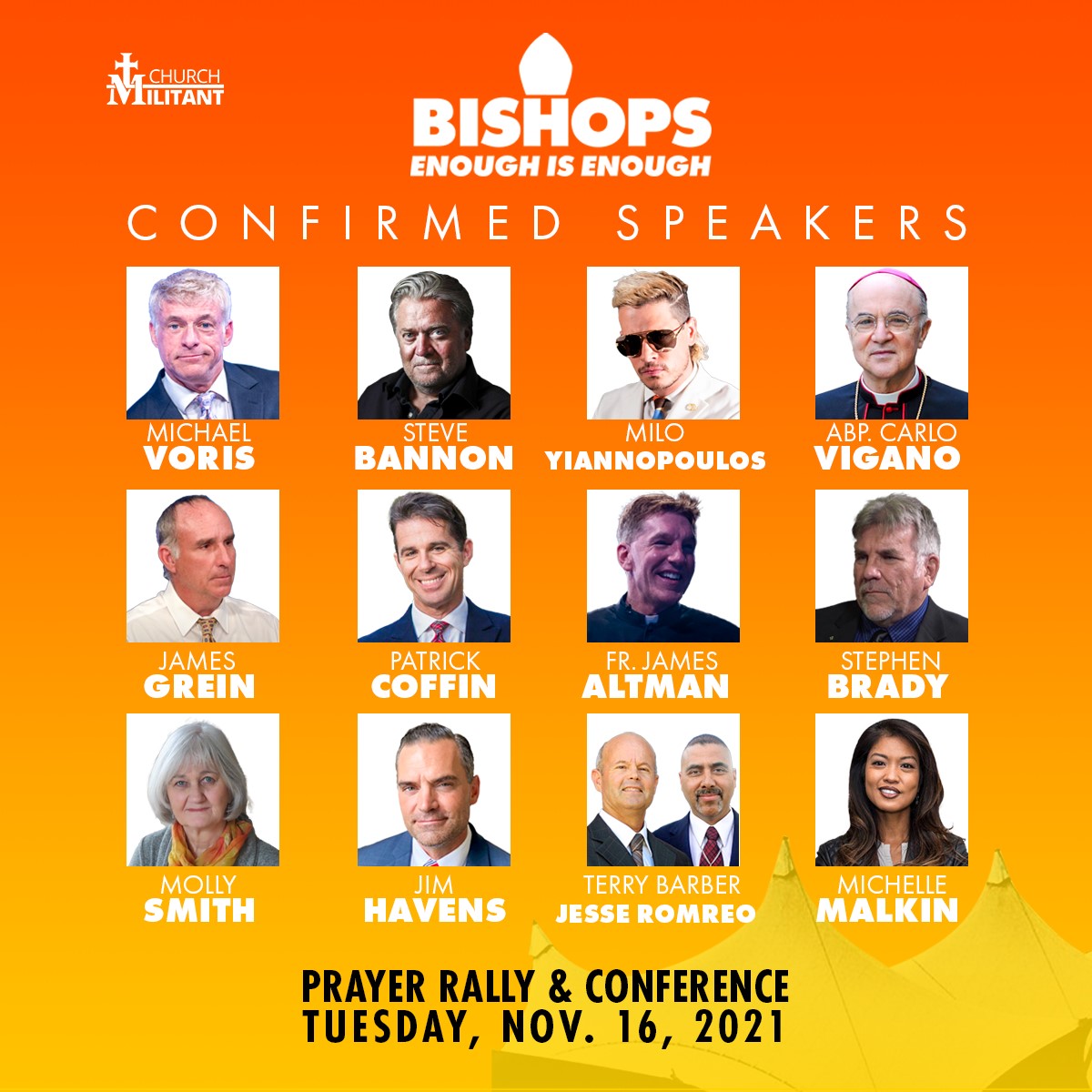 Baltimore City's religious bigotry is on display in its court filing in its mocking use of the phrase "Church Militant" in its memo. A five-minute Google search reveals that phrase is based on Ecclesia Militans, an ancient theological term denoting Christians doing spiritual battle against sin and striving for Heaven. It has no connotations of violence.

Defendants also briefly try to impute some sinister meaning to the name "Church Militant" that St. Michael's uses for itself. This argument is a bigoted statement, trying to smear Plaintiff's faith. In Catholic theology, there are "three states of the Church." The Church Triumphant, which consists of Christians who have ascended to Heaven; the Church Penitent (Christians currently in purgatory); and Church Militant (Christians who struggle on earth to combat sin). The only "church" to which a living human can belong is the "Church Militant." And in fact, every Christian is thus a member of "The" Church Militant. The name does not suggest that St. Michael's is violent, and Defendants cannot point to a single incident of St. Michael's ever being violent or promoting violence.

The reply brief applies the city's mocking attitude to other religious groups to highlight its discriminatory attitude:

The attempt to smear Plaintiff by trying to imply that the term "Militant" has a violent connotation is not clever, but is a terribly disappointing demonstration of bigotry — such as when an Islamophobe might refer to "Jihad" to smear Muslims — as if it had no other meaning than the violent interpretation (it literally means "the spiritual struggle within oneself against sin" — or how an anti-Semite would use the term "zionist" to infer that a Jewish citizen has "divided loyalties”"or is practicing bigotry.

As the brief notes, the city's mockery of this religious term lends support to Church Militant's claims the city discriminated against this apostolate's religious views by quashing the rally.

The court hearing is scheduled for Thursday, where (in addition to Bannon and Yiannopoulos) numerous witnesses, including McCarrick victim James Grein, Chicago priest Fr. Paul John Kalchik and others will testify on behalf of Church Militant.

The reply brief can be read in full below.