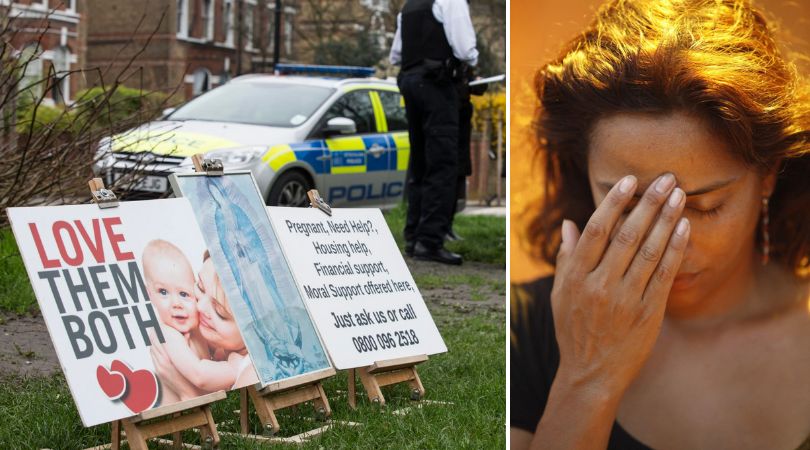 BOURNEMOUTH, England (ChurchMilitant.com) - A government council in England has banned pro-lifers from making the Sign of the Cross or sprinkling holy water outside its local abortion mill.

Last Tuesday, Bournemouth, Christchurch and Poole Council prohibited pro-life campaigners from holding vigils where members audibly pray, recite scripture or even genuflect when they see women going towards the abortuary to have their babies killed.

The draconian restrictions apply to a buffer zone outside of the British Pregnancy Advisory Service abortion center in Ophir Road, Bournemouth, and came into force on Thursday. They are set to last for a period of three years.

The Public Spaces Protection Order also forbids "displaying text or images relating directly or indirectly to the termination of pregnancy and or playing or using amplified music, voice or audio recording."

Under current legislation, it can already be an offence to "audibly pray" within buffer zones established around some abortion mills. Offenders can be fined from 100 to 1,000 pounds, with proposed legislation aimed at jailing praying protestors for up to six months.

During its six-week consultation process between July 20 and Aug. 31, 2022, BCP Council identified "holding rosaries," "praying, sometimes while kneeling" and "sprinkling 'holy water' on the pavement outside the clinic," as objectionable acts.

The 'evidence' that they have against us is — we prayed, were holding a rosary and giving out leaflets.

"Satire becomes redundant as the council has literally banned making the Sign of the Cross, as if it were an act of violence," Dave Brennan, executive director of the pro-life group Brephos, told Church Militant. "Since specifically banned acts include sprinkling of holy water and making the Sign of the Cross, this is evidently targeted discrimination of Roman Catholics."

"At a time when climate activists are engaging in criminal damage of historic artwork, severe disruption of motorways and gluing themselves to things, it is absurd that the ones getting it in the neck are peaceful, mature, respectful pro-lifers," Brennan maintained.

There has categorically never been any criminal activity perpetrated by pro-lifers outside abortion clinics in Britain — harassment and intimidation are already offences — and so the abortion lobby have had to resort to banning the very fact of being pro-life itself within a certain radius of where babies are being killed.

"How are we living in a society where killing babies is legal and paid for by the State, but silently praying against or even about this nearby is a criminal offense?" he asked.

Satire becomes redundant as the council has literally banned making the Sign of the Cross.

The consultation notes that respondents who insisted on a ban on religious activity around the abortuary were BPAS staff, mothers who had babies killed at the Bournemouth mill, BCP residents, women, individuals below the age of 55, LGBT persons, people of white British ethnicity and those "who have no religion or any religion other than Christian."

U.K. health regulator Care Quality Commission stated that "in the 12 months prior to our inspection from 1 July 2021 to 30 June 2022, the service completed 8,527 abortions, of which 6,863 were EMA by telemedicine (remote consultation and supply of abortifacient medicines to take at home). The clinic provided 976 surgical terminations and 686 medical terminations."

"BCP Council has decided to take our freedom away from us. We can't even pray silently. The 'evidence' that they have against us is — we prayed, were holding a rosary and giving out leaflets," a representative of In the Light Pro-Life Bournemouth told Church Militant.

"The council has produced a contradictory document saying that we have 'prayed peacefully outside the abortion center' and then said that we have a detrimental effect on people," the spokesperson said, stressing that the police had never arrested them or asked them to leave when praying.

The pro-lifers said that a pro-abortion group calling itself Sister Supporter had instigated the restrictions "by collecting signatures from the public on behalf of BPAS abortion center in order to propose the buffer zone to the council."

Further, the abortuary management was "upset" because "several women and men decided to keep their babies after speaking to us and reading out leaflets," the spokesperson said. "We will take action against this injustice."

Ironically, a report published on Oct. 7 by the CQC complained that the remains of murdered babies "were not always treated with respect."

In fact, the remains "were collected into a shared vessel" and "collecting several pregnancy remains in one receptacle separate from clinical waste was the default position."

Moreover, while 8,527 abortions were performed from July 1, 2021 to June 30, 2022, the abortion mill "did not always ensure the correct legal documentation was completed before surgical terminations," and staff "removed or minimized risks" for mothers.

A review posted by a mother complained, "Three nurses told me three different things about treatment. None were true. Surgeon started the abortion before my painkillers/sedation kicked in and wouldn't stop when I screamed for more painkillers making it a traumatic experience."

Pro-lifers have demonstrated outside 43 of the busiest abortuaries and hospitals in England and Wales, which cater to approximately 100,000 women using the centers to kill their babies.

“Do you support buffer zones around abortion clinics?” a listener asked Welby in a live interview on LBC Radio.

"Yes, I do, because people going to an abortion clinic — whatever you think of abortion — they’re human beings," said the archbishop, caught off guard by the question.