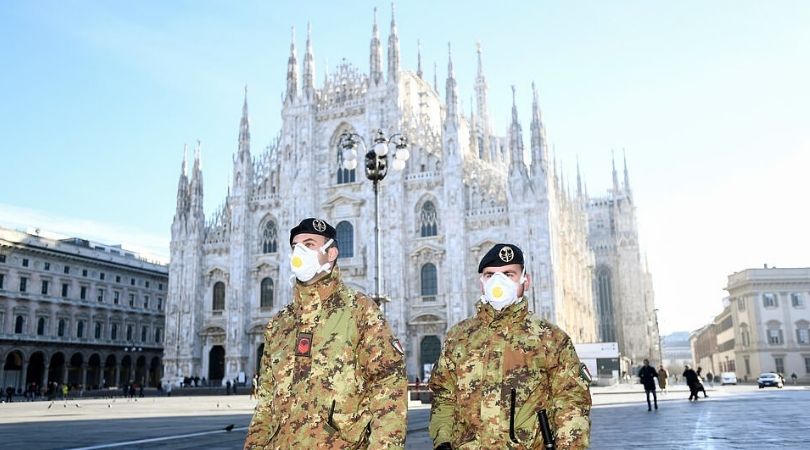 ROME (ChurchMilitant.com) - Catholics deprived of Mass are berating the bishops for "cowardice" in the face of the coronavirus crisis, while clergy afraid of being disciplined are celebrating the Eucharist "clandestinely" to small groups of the faithful in Northern Italy.

In an open letter to the archbishop of Turin, Catholic campaigner Angela Ciconte shames the bishops of "all the dioceses of Northern Italy" for "abandoning" and "betraying" the faithful and "submitting as cowards to political correctness" by shutting down churches in the region while "mosques and shopping centers" remain open.

"It is strange to hear of a church that has recently defined itself as an outgoing church and field hospital — to see it transform even faster than the infection itself into a self-closed church for fear of health," Ciconte, organizer of the "Rosary of Reparation" against the gay pride parade in Turin, writes to Abp. Cesare Nosiglia.

Ciconte is also protesting the "unconditional" imposition of communion in the hands instead of on the tongue and appealing to the archbishop to withdraw his directive.

Medical doctor Silvana De Mari, another voice challenging the acquiescence of the hierarchy to the fear of infection, is demanding the re-opening of churches in the region.

The physician highlights the irony of the bishops' response: "In the event of an epidemic, the first gesture of elementary prudence and common sense is to close the borders." Instead, the "new Church 3.0" wants open borders but closed churches. "The new Church 3.0 imposes on Italians an immigration of people who are often tested positive for scabies, tuberculosis and AIDS, but are they terrorized by coronavirus?" she asks.

"Closing churches during an epidemic is an atheistic gesture, so we note that a good part of the new Church 3.0 is completely atheist. Completely atheist and completely aligned with the elites who want the destruction of the Christian European civilization, but above all of Italy which is its heart," Dr. Mari adds.

Appealing to Catholics to "go to church, kneel down, ask for forgiveness of all our infinite sins," the medic says "the worst thing that can happen with coronavirus is to die."

But "the worst thing that can happen with closed churches is to live without God's will," which is "a hundred thousand times worse than death," she observes.

"Someone should explain to bishops and cardinals that the red and purple they wear are not colors for fun, but symbolize the blood of martyrdom. Christianity is a religion of people who are not afraid of death and pain," writes the doctor comparing the situation with martyrdom in Nigeria where Christians are burned alive in their churches.

Sources in Northern Italy told Church Militant of "clandestine" Masses being celebrated in the Lombardy region of Italy, mainly in the Novus Ordo rite.

"As always, the dispositions are ambiguous: some churches were closed, some were left open and Mass was suspended, some hosted Masses not intended for 'the people,' but if someone found themselves inside they didn't throw you out. Some priests celebrated without people, others took advantage and didn't celebrate at all," a local Catholic confirmed.

Church Militant is not revealing the locations to protect the identity of the priests.

Former Vatican journalist Aldo Maria Valli also confirmed his attendance at "an underground Mass, celebrated in disobedience to the bishop's dictates but in obedience to the mandate of Christ."

"It happened this way centuries ago in England, when, faced with the king's orders, the episcopate obeyed, with the sole exception of the bishop of a small diocese, Rochester, under Bp. John Fisher," Valli wrote.

A Mass celebrated "softly, without songs, so as not to draw attention to the outside; a Mass like those celebrated in Mexico during the Cristiada, like those celebrated beyond the Iron Curtain before the fall of communism. A touching Mass, celebrated by the priest with intensity and attended by the small flock with awareness. We are here to receive the true Body of Christ. We are here kneeling in front of a tabernacle, and not in an armchair in front of a television screen.

Catholic families told Church Militant they crossed the border driving into the Canton of Ticino in Switzerland to attend Mass in a number of local parishes in the region.

Meanwhile, Italian historian Andrea Riccardi — a Catholic — is drawing upon the research of American sociologist Rodney Stark — an agnostic — to remind Catholics how the early Church responded to epidemics with faith, not fear.

The worst thing that can happen with closed churches is to live without God's will ... a hundred thousand times worse than death from coronavirus.

Lamenting that the closure of the churches has left him with "some bitterness," Prof. Riccardi uses Stark's findings to explains "how the behavior of Christians in the epidemics was decisive: they did not flee like pagans out of the cities."

"Motivated by faith, they (early Christians) visited each other and supported each other, prayed together, buried the dead. So much so that their survival rate was higher than the pagans. Times are changing, but recent measures on coronavirus seem to trivialize the space of the Church, revealing the mentality of the authorities," he writes in La Stampa.

Riccardi pours scorn on the archbishop of Turin's quoting a government directive stating that "religious services are considered superfluous and therefore not exempt from restrictive measures." The fact that Mass is now considered "superfluous" should stir Catholics to deep reflection, the historian remarks.

He cites the example of St. Charles Borromeo, who during the 1576–77 plague in Milan, "an epidemic much more serious than the coronavirus ... fought with bare hands: visited the sick, prayed with the people and barefoot led a large procession praying for the end of the scourge."

Not even at the time of the bombing and the Second World War were the churches closed. "Rather, the people gathered confidently in them, despite the dangers of bombs and massacres," the professor lamented.

The French-owned church of San Luigi dei Francesi in Rome, famous for three of Caravaggio's paintings, will open Wednesday, following its closure by the French embassy after a French priest from the church was taken ill. The priest is now in France and has been cleared of the threat of infection, a statement from the French embassy announced.