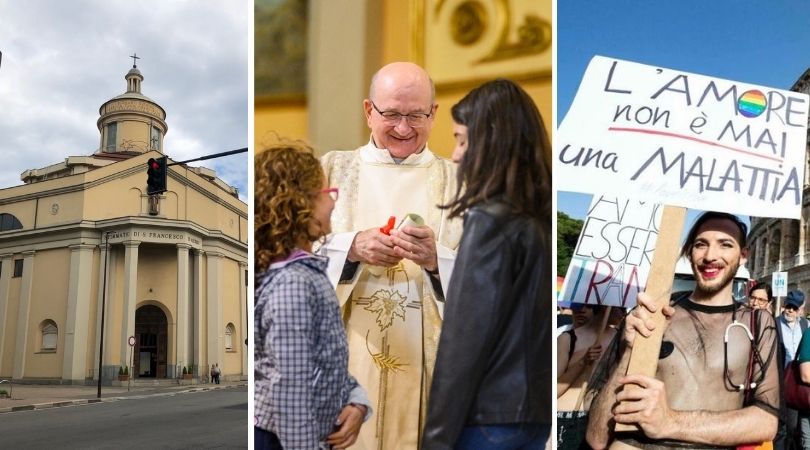 TURIN, Italy (ChurchMilitant.com) - The archdiocese of Turin has authorized the confirmation of a person who was baptized as a female and "transitioned" to the male sex after undergoing reassignment surgery.

Father Antonio Borio, parish priest of the Stigmata of St. Francis of Assisi Church, said he would welcome the gender-confused candidate as "the choice of receiving the sacraments of Communion, confession and confirmation does not depend on gender."

According to St. Paul's letter to the Galatians, "there is neither male nor female in Christ." God does not discriminate according to gender, Borio argued, revealing that he had received authorization from the archdiocesan chancellor, Fr. Alessandro Giraudo.

Giraudo, who approves of blessings for same-sex couples, instructed the parish priest to adopt fudged ecclesiastical regulations. The candidate is permitted to be confirmed using her post-transition name — but the confirmation is registered using the old baptismal name.

The chancellor also asked the parish priest to record, at the bottom of the entry in the confirmation register, the date and protocol number of the order from the civil court certifying sexual reassignment.

The agreement between Chancellor Giraudo and Fr. Borio deliberately distorts the Italian Episcopal Conference's 2003 rules on recording names in parish baptismal registers of persons who have undergone gender reassignment surgery.

Following instructions from the Congregation for the Doctrine of the Faith, CEI rules categorically state that no changes to names can be made on the register of baptisms after a gender reassignment surgery. Amendments are only permitted in the case of  a "possible transcription error."

The CEI rules do, however, permit the parish priest to record the "civil status" of a person concerning a legal change of gender. The priest may do so by "indicating the date and the protocol number of the order of the competent civil court and/or the document issued by the office."

Italian writer and Catholic Luisella Scrosati blasted the deceitful ruse of using the new name during confirmation while recording the old baptismal name.

The name uttered during the rite of confirmation "underlines the very close link between this sacrament and baptism, since confirmation, by its nature, confirms baptismal consecration," Scrosati wrote in the Italian daily La Nuova Bussola Quotidiana.

Legally, we abide by the rules. But God's mercy is for everyone.

The Catholic Church has always taught that the so-called sacraments of the living (confirmation, Eucharist, anointing of the sick, Holy Orders and marriage) must be received by those in the state of sanctifying grace. Whoever approaches it aware of being in mortal sin receives there validly but does not receive the fruit of the sacrament — and commits the grave sin of sacrilege.

A person who has asked to change his sexual condition is clearly opposed to the will of God — who created the person, male or female, in an objectively defined manner. It is, therefore, the duty of the parish priest to remind the person that, in order to receive the grace proper to the sacrament, sacramental confession is necessary, which brings with it the rejection of the act committed and the will, as far as possible, to remedy it.

However, Fr. Borio stated that "all the sacraments include faith, but we cannot measure the faith of a person who comes to us and feels he is right with God."

"I think such episodes will happen more and more," Borio predicted. "We should look at people. Above all, my job is to accompany them and be in contact with them. Everyone has a place in the house of God."

"Legally, we abide by the rules, but God's mercy is for everyone. For the rest, we need discretion and respect for personal choices," he added.

In a letter to German bishops, the CDF ruled that persons who have changed their gender cannot be "admitted to the celebration of sacramental marriage because this would be equivalent to marrying a person who biologically belongs to his own sex."

A person who changes his gender after medical intervention because he feels he belongs to another sex "only presents this other sex phenotypically," the CDF noted.

In July 2021, the diocese of Marquette became one of the first to rule that "a person who publicly identifies as a different gender than his or her biological sex or has attempted 'gender transitioning' may not be baptized, confirmed or received into full communion in the Church — unless the person has repented."

In May 2019, Fr. Borio removed the Blessed Sacrament from the tabernacle in his parish in order to host an interfaith service of prayer and reflection for Muslims and Catholics.

The service offered "an opportunity for multi-voiced reflection" on human fraternity, including on the visit of St. Francis of Assisi to the sultan of Egypt 800 years ago. The service was done in light of the document signed by Pope Francis and Ahmed al-Tayyeb in Abu Dhabi earlier that year.