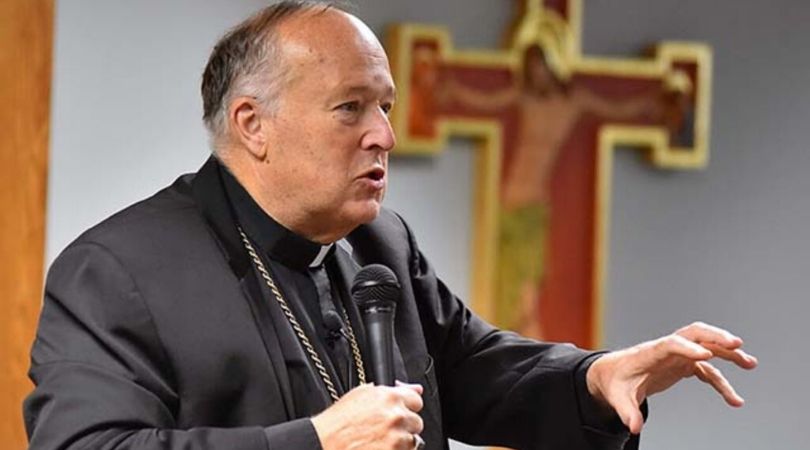 SAN DIEGO (ChurchMilitant.com) - Abortion and climate change were compared several times in a recent speech by San Diego Bp. Robert McElroy, who insisted Catholics must not be single-issue voters.

Abortion kills "more than 750,000 unborn children" but "the long-term death toll from unchecked climate change is larger and threatens the very future of humanity," said McElroy.

The speech took place at the University of San Diego Thursday.

The long-term death toll from unchecked climate change is larger [than abortion] and threatens the very future of humanity.

Speaking of contraception, which — in accordance with Church teaching — he admitted is "intrinsically evil," McElroy alleged "it is a far greater moral evil for our country to abandon the Paris Climate Accord than to provide contraceptives in federal health centers."

The California prelate also discussed what he calls "the culture of exclusion," which includes "anti-Muslim bigotry" and "animosity against immigrants."

McElroy decried the partisan divide in the nation and said, "Seen against this background of abortion, climate change and the culture of exclusion, it is clear that the faith-filled voter who seeks to be guided by Catholic social teaching is confronted by compelling moral claims that cut across the partisan and cultural divides of our nation."

Some Catholics in attendance expressed disappointment in the bishop's lecture.

Interviewed for Church Militant, Moira Malley said McElroy "mentioned Catholic social justice several times, but you did not mention the 10 Commandments. Abortion is the torture and murder of a human being in the womb up to birth, and sometimes beyond birth."

Merrill Adrian sought comment from McElroy during the presentation but received no response.

"Planned Parenthood has offices in L.A. County schools. They can actually give your children abortions or contraceptives without parents being notified. They are undermining children's rights," she said. "I wanted to hear his comments on that. ... Far more than climate change, children are very important."

McElroy's speech comes as a more pronounced presentation of a position he has held for some time.

"It is not Catholic teaching that abortion is the pre-eminent issue that we face as a world in Catholic social teaching. It is not," said McElroy at the U.S. Conference of Catholic Bishops' (USCCB's) general assembly in November.

McElroy was siding with Cdl. Blase Cupich of Chicago, who claimed abortion should not be considered the "pre-eminent" issue of our time, as thinking otherwise would contradict the spirit of Pope Francis' pontificate.

In June 2019, McElroy was the keynote speaker at a conference titled, "Laudato Sí and the U.S. Catholic Church: A Conference Series on Our Common Home" at Creighton University in Omaha, Nebraska.

"For us in the United States at this perilous moment in our national history, the core themes of Laudato Sí are especially urgent. We stand, deeply estranged from one another, seething in divisions and unwilling to reconcile," he said during the speech, adding: "We are the most powerful nation in the history of the earth, yet have rejected the only realistic pathways that have emerged to heal our broken planet."