Coconspirators in the Communion Wars 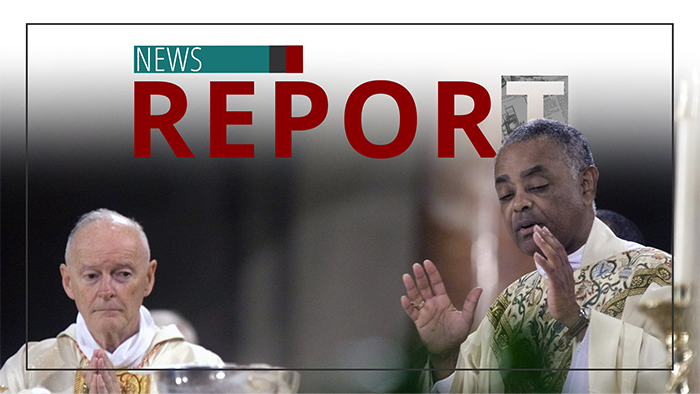 The 2004 attempt to subvert doctrine

The current controversy over fake Catholic politicians receiving Communion is only the most recent skirmish in a nearly 20-year-old war. Church Militant's Kristine Christlieb flips the switch on the time machine and takes us back to a much earlier battle.

The St. Louis Post Dispatch took the opportunity to ask the new archbishop if he would allow the pro-abortion Democrat candidate to receive Communion.

Burke told the newspaper he "might give Massachusetts senator John Kerry a blessing, but not Communion."

It was the shot heard 'round the Church.

The bishops were scheduled to take a vote on the question of denying the Eucharist to impenitent politicians at their June meeting.

Prior to the meeting, then-cardinal Joseph Ratzinger, prefect for the Congregation for the Doctrine of the Faith, wrote a memo to McCarrick, making clear that canon 915's language meant mandatory denial of Holy Communion.

But when briefing the bishops, McCarrick deliberately mischaracterized the memo, claiming it offered the opposite guidance.

Days after the meeting, an Italian magazine published the memo, and the deception was revealed.

McCarrick's and Gregory's plot against their brother bishops had the desired effect. The bishops voted and decided to leave the decision to the individual bishop's discretion.

Wilton Gregory is falling into the corrupt pattern established by earlier bishops in the archdiocese of Washington: McCarrick, who is now laicized and facing criminal charges, and Donald Wuerl, who had to resign in disgrace.