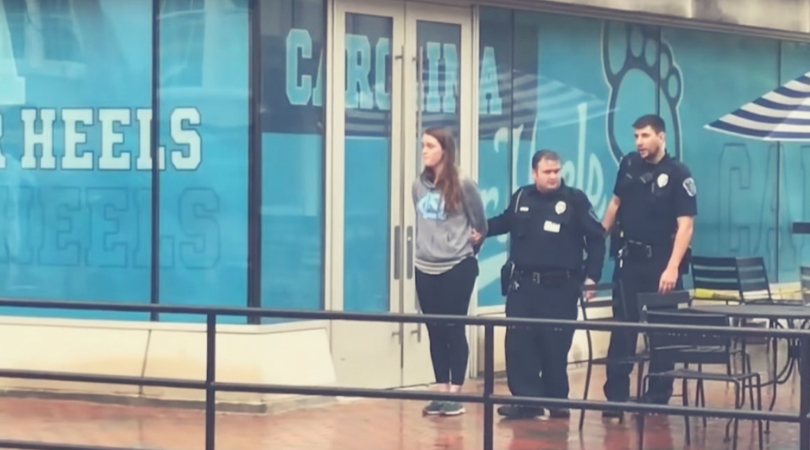 CHAPEL HILL, N.C. (ChurchMilitant.com) - A college student was arrested and charged with larceny after stealing a sign from pro-lifers on campus.

A female student at the University of North Carolina, Chapel Hill (UNC) is on video taking a sign from pro-life group Created Equal. She acted curious about what was on the other side of the placard, then picked it up and hurried away. The pro-lifer pleaded as she took off, "Ma'am, don't steal the sign."

The pro-life advocate, Austin Beigel, followed the student and continued capturing video on his phone. The chase soon ended as a campus police officer came over and asked the student what she was doing with the sign.

She meekly claimed that she was simply "moving" the sign, not stealing it. The officer asked her to stop leaning on the sign, worried that she would damage it.

The officer went on to detain her on the charge of larceny for trying to take the sign.

The student complained to the policeman about pro-life advocacy, saying, "This restricts women's rights."

She argued at one point, "He's promoting lies on a college campus."

The pro-abortion student accused the officer of protecting Beigel. The officer replied, "I'm not trying to 'protect' anyone, but I do have to enforce the law, OK?"

He tried to reason with the student, telling her, "OK, well, this is a public display, OK? They have a right to be here. If you don't like their speech, you can go away. You don't have to watch it."

"They're here because they want us to watch them," she complained.

"OK," the policemen said, "but you can ignore them. If you ignore them that takes away their power."

She wiped a tear from her eye as she told the policeman, "And y'all just let them get away with this s***."

She expressed shock when the officer said he was detaining her for larceny.

Beigel is a part of the outreach team for pro-life organization Created Equal. Mark Harrington, the president of Created Equal, said in a press statement shared with Church Militant, "Students at UNC and campuses like it are in dire need of remedial First Amendment training."

Harrington also commented, "Students being groomed on college campuses to be leaders, writers and thinkers of the Left are increasing in censorship and violence against those with whom they disagree. Their surprise when held accountable indicates college campuses have become safe spaces for pro-abortion violence."

Students at UNC and campuses like it are in dire need of remedial First Amendment training.

This incident comes about a week after another female UNC student was arrested for punching Beigel. That pro-abortion student was enraged by the graphic images of aborted children featured in Created Equal's displays.

So Beigel was assaulted, and then a week later had a sign stolen.

In October 2017, Church Militant reported on multiple acts of vandalism against a pro-life "Field of the Innocents" display at Northern Kentucky University (NKU). Vandalism from pro-abortion students (and even faculty) has been a recurring problem over the years for the pro-life community at NKU.

At Bellarmine University in Louisville, Kentucky, a display commemorating abortion victims was vandalized by supporters of abortion in late January 2018. Pro-abortion vandals stole dozens of small crosses representing the millions of babies killed through legalized abortion. They also tore down signs and scribbled pro-abortion messages on them.

Connected with the crimes against pro-lifers on campuses is the problem of colleges silencing conservative viewpoints.

Earlier this month, students and faculty at California Polytechnic University called on administrators to remove Chick-fil-A from campus.

The Academic Senate, a body representing the university's 1,300 faculty members, passed a resolution claiming that the fast food restaurant chain's on-campus location needed to go because the company's owners are Christians who support traditional marriage. One faculty leader went so far as to compare banning Chick-fil-A to banning pornography.

In March 2018, a Gallup poll found that many college students are afraid of expressing their views on campus.

At the University of California-Berkeley, protests and riots have broken out when conservative speakers were scheduled to speak on campus. This happened when Ben Shapiro of The Daily Wire spoke there in September 2017. Controversial conservative speaker Milo Yiannopoulos had a speech at Berkeley canceled on Feb. 1, 2017 due to violent protests.

In recent weeks, there was widespread outrage when Pennsylvania Democratic lawmaker Brian Sims recorded himself bullying a pro-lifer outside a Planned Parenthood. Pro-lifer leaders responded with a large rally in Philadelphia.

In an op-ed for Fox News, Emma Meshell, a correspondent for campus free speech group Campus Reform, opined that Sims' bullying is the result of the anti-life and anti-conservative bullying that happens on college campuses.

She wrote, "The footage of Pennsylvania State Rep. Brian Sims harassing an elderly woman praying near a Planned Parenthood clinic in Philadelphia is shocking, and rightly so. ... But vitriol like this is commonplace on our college campuses, where dissidence is squashed by intimidation and violence." 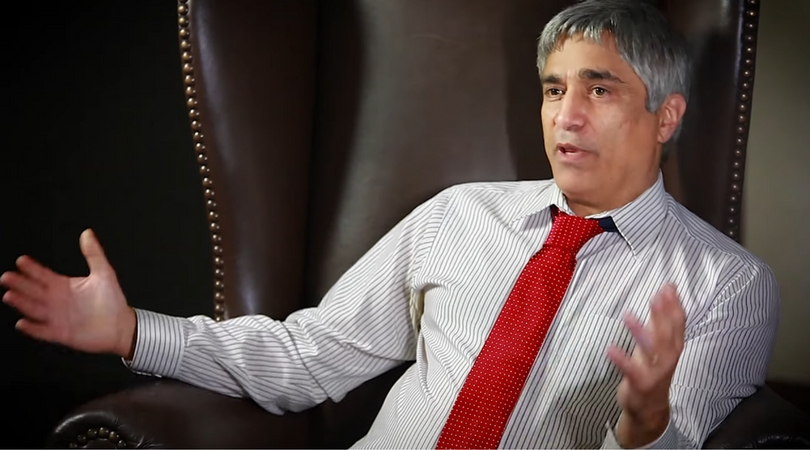 Catholic Professor Under Fire for Truthful Commentary
By Christine Niles   •   0