Abp. Allen Vigneron should reveal facts about his Review Board

For those who have been agitating against bishops and their diocesan bureaucrats who have an established track record of pushing ever forward with every manner of dissent against Catholic teaching, the revelations about Cdl. "Uncle Ted" McCarrick and the shenanigans of leaders in six Pennsylvania dioceses revealed in the grand jury report of two months ago are not surprising.

What is surprising is to see, finally, is some U.S. bishops finally acknowledging that the routine deceit of their peers is a problem, and it is almost incomprehensible to see some of the longtime sycophants in the Catholic media, especially those connected to EWTN, to be joining in the clamor for both accountability for bishops who have lied to the public and for all sorts of meaningful changes in the way the Church is run, including allowing laity to have a voice in what bishops are allowed to do as ordinaries.

Meanwhile, as 10 state attorneys general have announced plans to investigate the handling of crimes by priests and bishops, a close reading of the history of the sex abuse mess in the archdiocese of Detroit (AOD) raises questions that seemingly only can be answered by forcing chancery employees to testify under oath.

Even as he claims to be seeking to "change the DNA" of the archdiocese and has spoken of a need for honesty and transparency, he still employs within his chancery, in top positions of authority, some of the worst predator priest enablers from the pre-Dallas era and takes extreme measures to silence any and all who would even question why, 16 years after Dallas, these enablers control parts of his administration. His boasts of "radical change" for the better under his rule sound silly when looking at his advisory board.

For example: The following thread of events that raises profound questions about the whole AOD response to clerical sex abuse going back to the scandals began making routine headlines in public in the 1990s.

In 1993, notorious and well-known pedophile Fr. Gerald Shirilla — a professor at Sacred Heart Seminary and director of the Office of Worship in the AOD chancery — was removed owing to accusations of a sexual nature. Ned McGrath, archdiocesan communications director beginning in 1990, told the press the decision to suspend Shirilla was made by a Review Board.

In 2002, after the Boston Globe "Spotlight" bombshells, the Detroit Free Press discovered Shirilla had been secretly assigned in 2001 by Cdl. Adam Maida and Gaylord Bp. Michael Cooney to a parish with an elementary school in northern Michigan.

Nobody in the media raised an eyebrow about this claim, because nobody had heard of a review board before and it all seemed about right — except for me. At that time, I was editor of The Michigan Catholic and watched the sex predator enablers — worst among them, Bp. Walter Hurley, formerly in charge of handling claims of priest sex abuse in the AOD; Msgr. John Zenz, former moderator of the curia (chief of staff) under Cdl. Adam Maida; and McGrath — daily. I doubted there ever was a review board in those days and still doubt it. This episode is described in this author's article about his "#CatholicMeToo moment" while editor of The Michigan Catholic.

In 2002, after The Boston Globe "Spotlight" bombshells, the Detroit Free Press discovered Shirilla had been secretly assigned in 2001 by Cdl. Adam Maida and Gaylord Bp. Michael Cooney to a parish with an elementary school in northern Michigan.

When reporters questioned how a priest dismissed from ministry nine years earlier would up as a pastor, McGrath insisted publicly in writing (in 2002) that there was a 10-member review board and it oversaw things and made the key decisions. It was also independent, kind of.

Reporters asked for the names of Review Board members. Both Cdl. Maida and McGrath stonewalled. McGrath said these folks were volunteers and treasured their privacy; thus the AOD would not release their names, but might someday in the future. In any case, not a single member of the supposed Review Board was revealed at that time, in early 2002.

The secular media backed off the issue of the legitimacy of the Review Board, stymied once again in their effort to get solid answers to solid questions from the AOD; McGrath, a former TV journalist, is exceedingly skilled at dodging, deflecting and deceiving the media to get them off the scent.

At the time, 2002, I was editor of Credo, a Catholic weekly in Ann Arbor, and covered the Shirilla revelations. I talked to Diehl during two separate phone calls to inquire how it came to pass that Shirilla became pastor after she and the Review Board had formally stripped him of ministry in 1993.

"I don't know," she exclaimed. "We were all shocked!" Yes indeed. With the passage now of a full generation, she may have been as shocked as Captain Renault in Casablanca.

Now that almost a full generation has passed since the original Shirilla mess and nobody seems to be paying much attention, those who are concerned about real transparency in the AOD can see serious discrepancy in Diehl's story, which is important because she is still a member of the Review Board. She still carries with her the prestige of being among Detroit's more prominent lawyers, and that rubs off on the rest of the AOD, giving cover to the chancery employees who worked so hard to keep Shirilla in action.

The opening words of the biography of Diehl on the AOD's web page for the Review Board states she was "appointed to the Review Board in 2002," then gives lots of info about her career which includes being president of the State Bar of Michigan.

How could Diehl have voted to remove Shirilla from ministry in '93 if she was not on the board until nine years later?

Two months ago, I emailed Diehl requesting an interview to discuss her work with the Review Board; more specifically, "circumstances regarding Fr. Gerald Shirilla. ... My main interest is your involvement because you reached out to the media and indicated that you were on the board, while Ned McGrath steadfastly refused to acknowledge the names of any members."

Diehl declined to talk in an email and referred me to a chancery priest who she said is in charge of the Review Board. But that's a problem because Abp. Vigneron's spokesman wrote to me five years ago and said all inquiries from me to the chancery will be ignored or deleted. Vigneron may be many things, but he is not much into dialogue.

Perhaps some Catholic media figures who have access to the AOD could get answers to these questions in the spirit of the transparency Vigneron talks about. Perhaps veteran journalist and current daily EWTN talk show host, Teresa Tomeo, who lives in the AOD, could interview both Ned McGrath and Nancy Diehl and clarify things. 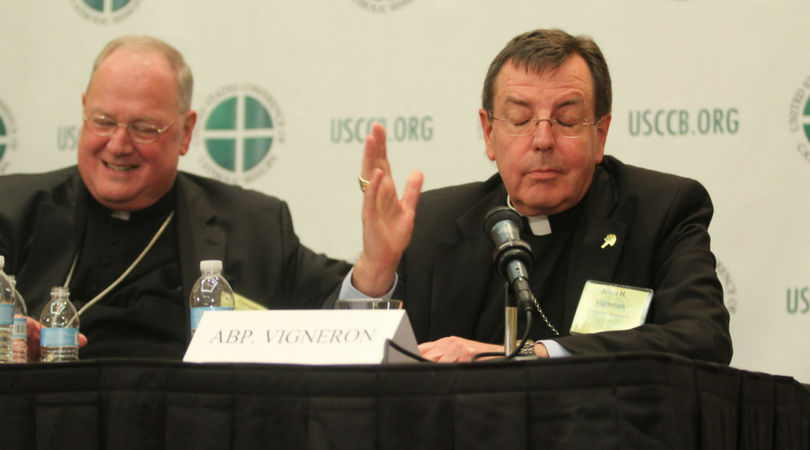