ROME (ChurchMilitant.com) - The former head of the Vatican's highest court is renewing his urgent call to consecrate Russia by name.

Speaking at the Rome Life Forum on Wednesday, Cdl. Raymond Burke called for the Church to include the consecration of Russian to the Immaculate Heart of Mary as part of its pandemic response.

"The consecration of Russia to the Immaculate Heart of Mary is more needed today than ever," affirmed Burke.

In his talk, titled, "Fatima: Heaven's Answer to a World in Crisis," Burke focused on China's role in spreading the Wuhan virus and on Russia's role in infecting China with its error of communism.

"When we witness how the evil of atheistic materialism, which has its roots in Russia, directs in a radical way the government of the People's Republic of China," said Burke, "we recognize that the great evil of communism must be healed at its roots through the consecration of Russia, as Our Lady has directed."

During the 2017 Rome Life Forum, Burke urged that Russia be consecrated by name.

"Certainly, Pope St. John Paul II consecrated the world, including Russia, to the Immaculate Heart of Mary on March 25, 1984," he said. "But, today, once again, we hear the call of Our Lady of Fatima to consecrate Russia to her Immaculate Heart, in accord with her explicit instruction."

"The call of Our Lady of Fatima to consecrate Russia to her Immaculate Heart, in accord with her explicit instruction, remains urgent," said the cardinal.

Cdl. Cordes had refused to specifically name Russia because Vatican diplomats had urged him not to mention this country because otherwise political conflicts might arise.
On Wednesday, analyzing the current state of the world, Burke clarified that the consecration explicitly of Russia is dire and urgent.

"Recognizing the necessity of a total conversion from atheistic materialism and communism to Christ," observed Burke, "the call of Our Lady of Fatima to consecrate Russia to her Immaculate Heart, in accord with her explicit instruction, remains urgent."

In 2017, Cdl. Paul Josef Cordes, former president of the Pontifical Council Cor Unum, confirmed that John Paul II had wanted specifically to name Russia during his consecration of "all individuals and peoples" in 1984, but failed to do so owing to pressure from Vatican officials.

Speaking of John Paul, Cordes revealed, "He himself had made this consecration on March 25, 1984 when the statue of Mary came from Fatima to Rome. However, he had refused to specifically name Russia because Vatican diplomats had urged him not to mention this country because otherwise political conflicts might arise."

This point was confirmed in 2015 by the late Fr. Gabriele Amorth, then-chief exorcist of Rome.

"I was there on March 25 [1984] in St. Peter's Square; I was in the front row, practically within touching distance of the Holy Father," related Amorth. "John Paul II wanted to consecrate Russia, but his entourage did not, fearing that the Orthodox would be antagonized, and they almost thwarted him."

Therefore, when His Holiness consecrated the world on his knees, he added a sentence not included in the distributed version that instead said to consecrate "especially those nations of which you yourself have asked for their consecration." So, indirectly, this included Russia. However, a specific consecration has not yet been made. You can always do it.

On Wednesday Burke cited the specific directive coming from Our Lady of Fatima to the three children seers.

"To prevent this [the punishment of the world 'for its crimes by means of war, famine, and persecutions of the Church and of the Holy Father'], I shall come to ask for the consecration of Russia to my Immaculate Heart and the Communion of Reparation on the First Saturdays," Burke related.

The cardinal recalled Our Lady's warning of what would happen if Russia was not consecrated: "If not, she will spread her errors throughout the world ... . The good will be martyred, the Holy Father will have much to suffer, various nations will be annihilated."

He also brings up the controversial topic of what's called the Third Secret of Fatima saying it's about diabolic forces infecting the Church.

"The most respected studies of the apparitions of Our Lady of Fatima," noted Burke, "hold that the third part of the Message or Secret of Fatima has to do with the diabolical forces unleashed upon the world in our time and entering into the very life of the Church, which lead souls away from the truth of the faith."

Papal ambassador-turned-whistleblower Abp. Carlo Maria Viganò concurs. During an interview in April, the archbishop was even more specific about what diabolical forces were in play.

Viganò asserted the authentic third secret of Fatima was hidden "because the content of the message would have revealed the terrible conspiracy against the Church of Christ by its enemies."

Viganò agreed with Burke and others who say the explicit consecration of Russia in a collegial effort by all bishops in union with the pope has never been done.

He added that this conspiracy was aimed at creating an apostate "modernist and Masonic ... neo-Church" whose purpose was not to save souls "but to constitute itself as the spiritual arm of the New World Order and an advocate of universal religion."

During this interview, Viganò agreed with Burke and others who say the explicit consecration of Russia in a collegial effort by all bishops in union with the pope has never been done.

Let us not forget Our Lady's unheeded appeal for the Pope and all the Bishops to consecrate Russia to Her Immaculate Heart, as a condition for the defeat of Communism and atheistic materialism: consecrate not "the world," not "the nation which You want us to consecrate to You," but "Russia." Was it so costly to do that?

On Wedenesday, Burke did cite Our Lady's word's in 1917 that foretold the consecration would eventually take place, according to her direction.

"The Holy Father will consecrate Russia to me, and she will be converted, and a period of peace will be granted to the world. In Portugal, the dogma of the Faith will always be preserved," Burke related. 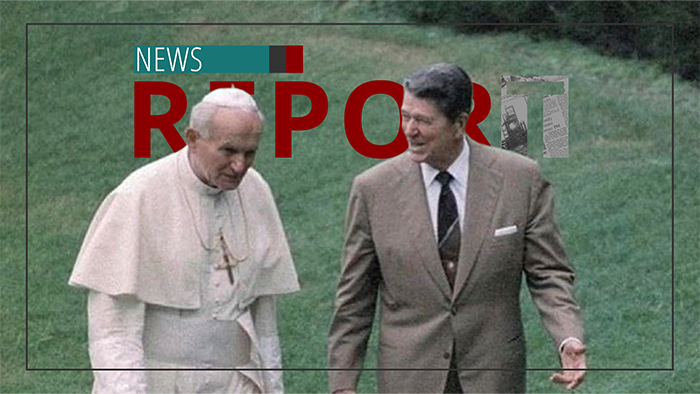