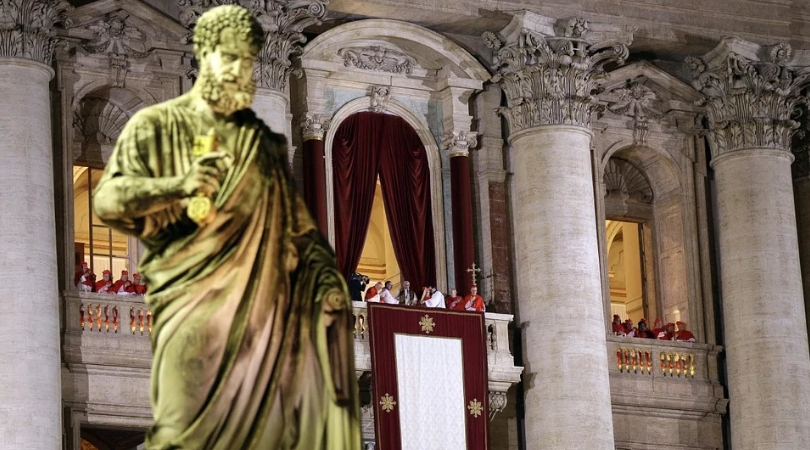 A response to Ross Douthat

On Nov. 10, Ross Douthat published in The New York Times a leader under the title "What Will Happen to Conservative Catholicism?" The article is very revealing, since Douthat has shown himself the spokesman of that brand of Catholicism, often in valuable ways, as in his book To Change the Church, in which he analyzes Pope Francis' revolutionary program. However, the salient lesson to be drawn from Douthat's article is the murky pool of intellectual dishonesty on which conservative Catholicism floats.

An ecclesiological premise that Catholicism is a religion that began in 1962.

We have here the point of view of Catholics whose agenda has been set by the Vatican II modernists, an ecclesiological premise that Catholicism is a religion that began in 1962. Within that view, it is possible to have two opposing schools, those which Benedict XVI defined as the hermeneutic of rupture and the hermeneutic of continuity, as applied to the Vatican Council; and the "conservatives" were relying on John Paul II and on Benedict himself as the guarantors of the latter.

I beg pardon for pointing out that there is an alternative view, the one that notices that the Christian Church has been teaching for 2,000 years. Within that conspectus, what need was there for John Paul II to settle debates over celibacy, divorce, intercommunion and female ordination? They had been settled long before by the perennial doctrine of the Church.

After the preamble mentioned, Douthat gets to the marrow of his question when he discusses the two responses that conservative Catholics can give to the present papacy: One is simply to accept whatever changes of doctrine Francis chooses to make by papal fiat. The other is outlined by Douthat as

a conservative Catholicism that strains ... to interpret all of Francis’ moves in continuity with his predecessors, while arguing that the pope’s liberalizing allies and appointees are somehow misinterpreting him. This was the default conservative position early in the Francis pontificate; it has since become more difficult to sustain. But it persists in the hope of a kind of snapping-back moment, when Francis or a successor decides that Catholic bishops in countries like Germany are pushing things too far, at which point there can be a kind of restoration of the John Paul II-era battle lines, with the papacy — despite Francis’ experiments — reinterpreted to have always been on the side of orthodoxy.

Well, roast me on St. Laurence's gridiron. Is this intellectual contortion supposed to be the Catholic truth that the Church has always stood for? Is it the jewel of truth for which martyrs shed their blood? Is it the integrity that Christ demanded when he taught, "Let your Yea be Yea and your Nay be Nay"? At its lowest, is it the position of a person with a brain in his head?

No, it is "conservative" Catholicism in all its lucidity: the intellectual stance of those who have spent the last 50 years trying to reconcile Catholic orthodoxy with the shifts and surrenders of the Second Vatican Council.

We need to ask ourselves, why do "conservative" Catholics look to this travesty as if it were a tenable school of Catholic interpretation? Douthat sketches the answer when he suggests that the alternative is to become

a kind of de facto sedevacantist, a believer that the pope is not really the pope — or, alternatively, that the church is so corrupted and compromised by modernity that the pope might technically still be pope but his authority doesn’t matter anymore. This is the flavor of a lot of very-online traditionalism, and it’s hard to see how it wouldn’t (eventually) lead many of its adherents to a separation from the larger church, joining the traditionalist quasi-exile pioneered after Vatican II by the Society of Saint Pius X.

We see here how all-pervasive the intellectual dishonesty of the "conservative" Catholics has become, that they are not even able to envisage an honest answer to present problems. The position of genuine Catholics, those who stand on the doctrinal tradition of the Church, is not that "the pope is not really the pope" or that "his authority doesn’t matter anymore." Francis is indeed the Pope, and his authority matters enormously; it matters because he is using it to destroy the Church.

The response is to recognize facts as they are, not to exercise oneself in squaring circles in the service of an ill-instructed papolatry.

The response to this is to recognize facts as they are, not to exercise oneself in squaring circles in the service of an ill-instructed papolatry. As Catholic theology has always recognized, there have been bad councils in the past — the Arian councils, which obfuscated the divinity of Christ, or the Council of Constance, which promoted the conciliarist heresy — and there have been bad popes, notably Honorius, who was condemned after his death as a heretic and "cast out of the holy Church of God."

The Catholic response to these facts is not to wriggle away from them but to face them and fight the evil they represent. Saint Robert Bellarmine, confronted with the theological question in the abstract, did not tie himself into the knots of today's Catholic "conservatism." He taught forthrightly: "It is legitimate not to obey the orders of the pope and even to prevent the execution of his will if he puts souls in danger, especially if he were to strive to destroy the Church."

That, however, was four centuries before 1962. Conservative Catholics haven't heard about it.