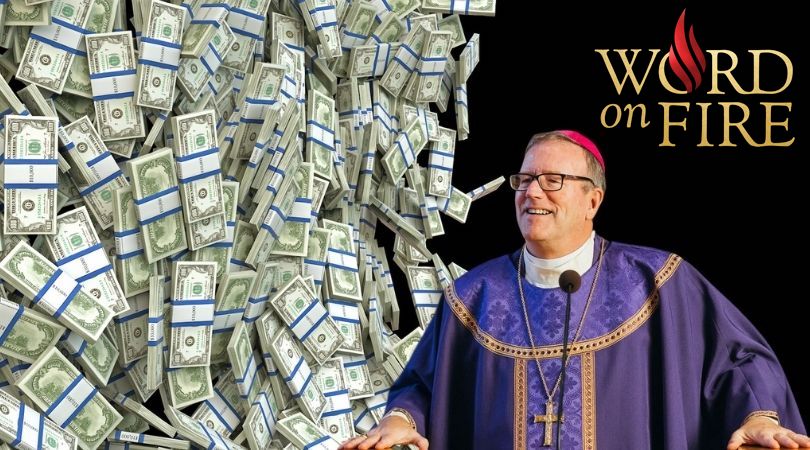 Word on Fire gets over $1 million from Protestant-founded body

The John Templeton Foundation (JTF), founded by a theologically liberal Presbyterian, is endowing Barron with $1,165,640 over three years "to establish a suite of faith and science programs for Catholic leaders and public audiences."

The grant, which will support Barron's new project Fiat Lux: The Word on Fire Institute on Science and Religion until January 2023, has been awarded by the evolution-promoting JTF under its funding area of "public engagement."

With over $3.4 billion in assets and annual grants of $129 million in 2017, the JTF ranks among the 25 largest grantmaking foundations in the United States — working vigorously with faith-based organizations and churches to promote contraception in the developing world.

The Templeton Foundation reports that Word on Fire will use its grant to produce faith and science courses, hold a digital summit to equip Catholic leaders to engage with science in their ministry and create videos aimed at religious and non-religious audiences.

Word on Fire will also hold a colloquium with in-person and online audiences, which will be recorded as a DVD and repurposed as a faith and science course.

Nowhere in Barron's talk did he defend the actual teaching of the Church that our sexual morality comes not from 'science' but from the Bible.

Barron's project expects "9,000 students to take at least one course; 40,000 registrants for the digital summit; over 3 million total video views with another 250,000 reactions; and, for the colloquium, over 1,000 attending in person and another 40,000 watching online."

JTF names Jared Zimmerer, a bodybuilder who has a bachelor's degree in kinesiology and a master's degree in theology, as the Fiat Lux "project leader." Zimmerer is a non-scientist who is currently pursuing a humanities doctorate from Faulkner University.

Speaking to Church Militant, John Gravino, author of updated bestseller Confronting the Pope of Suspicion, questioned Barron's integrity and ability to promote a Catholic apologetic of theology and science.

You're going to hear the message over and over: "The Church needs to be more scientific!" It's a message that originated in the heretical theology of the '70s, which attempted to change Church teaching on homosexuality. And statements by Barron suggest that he is on board with an episcopal conspiracy to promote homosexuality in the Church. That's not science; it's propaganda — and sin.

In an in-depth theological exposé of Barron in his book, Gravino blasts the "bishop of suspicion" dismantling his keynote address at the 2018 Amoris Laetitia conference in Dublin.

Despite Barron's constant evasions, his presentation at the conference hit every major talking point of the sexual-liberation heresy.

"Despite Barron's constant evasions, his presentation at the conference hit every major talking point of the sexual-liberation heresy," writes Gravino. "At midway through his talk, he repeated the German heresy found in chapter seven of Amoris Laetitia that sexual morality needs to be informed by science."

"Nowhere in Barron's talk did he defend the actual teaching of the Church that our sexual morality comes not from 'science' but from the Bible," Gravino observes.

While fuzzy on a number of theological issues — including the heresy of universalism — Barron seems to have taken a Catholic position on contraception, hailing Pope Paul VI's Humanae Vitae as prophetic and laying out the consequences of turning away from the Church's traditional teaching on sex.

In a 2018 video, Barron endorses the anti-contraception encyclical explaining how marital integrity is violated "when, through a conscious choice, a couple introduces an artificial block to procreation" and "thereby stands opposed to God's will."

However, Barron has refused to comment on how he is comfortable accepting such a large sum of money from an organization that intentionally funds the promotion of artificial birth-control methods in contradiction to Catholic teaching.

JTF explains that its founder "Sir John Templeton believed that families would flourish when parents were empowered to choose their ideal family size."

Sir John Templeton believed that families would flourish when parents were empowered to choose their ideal family size.

John Templeton "took a broad view of spirituality and ethics and was influenced by the Unity School of Christianity, a movement that espouses a non-literal view of Heaven and Hell and a shared divinity between God and humanity," the Washington Post commented.

JTF trumpets its role of "empowering local churches to deliver programs and messages that support voluntary family planning" while clarifying that it "only funds research and programs that affirm the value of human life from conception until natural death."

However, together with abortion-giant Planned Parenthood and the pro-abortion Bill and Melinda Gates Institute for Population and Reproductive Health, JTF is a member of the Reproductive Health Supplies Coalition (RHSC), which brings together agencies "with critical roles in providing contraceptives and other reproductive health supplies."

Explaining the interconnection of the pro-contraception agencies, economist Vincenzina Santoro writes, "They are aware that their 'commodities' are naturally spurned, especially in many countries of Africa where children are regarded as 'gifts from God.'"

"To gain converts, they first seek to win over thought leaders, community elders or religious hierarchy on the benefits of family planning, arguing that having fewer children means more prosperity for families," Santoro notes in the Human Life Review. "These leaders in turn can influence the masses — and open up the market ... projected to rise to $37 billion by 2025."

JTF gave $4,833,722 to the Biologos Foundation from 2012–2015 to promote evolution, stating: "The grant recipients will produce hundreds of videos, articles, books, lectures, workshops and websites, greatly increasing the visibility of the evolutionary creation point of view."