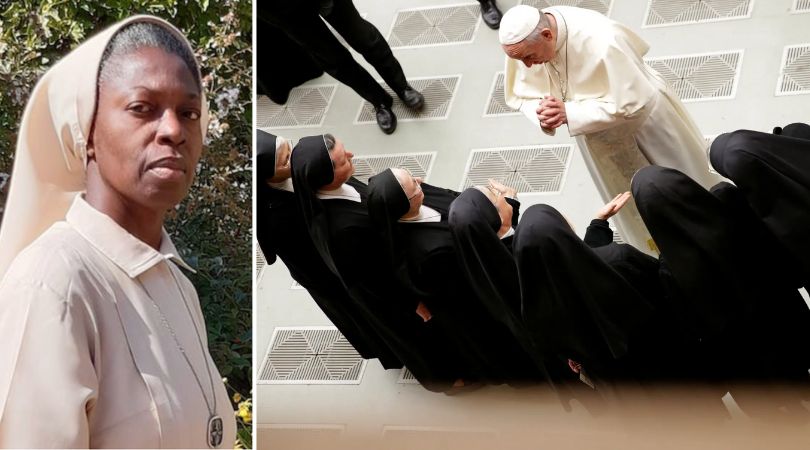 ROME (ChurchMilitant.com) - An African nun, who is a lecturer in anthropology at the Pontifical Gregorian University, is blowing the whistle on the widespread sexual abuse of nuns by predator priests.

In multiple interviews with French media in October, Sister Mary Lembo, a convert to Catholicism and the daughter of a Protestant pastor, is revealing the magnitude of the "rape, attacks and unwanted pregnancies" of nuns and its "possible systemic aspect."

A member of the congregation of the Sisters of St. Catherine of Alexandria, Sr. Lembo's doctoral thesis has been published under the title Religieuses Abusées en Afrique. Faire la Vérité (Abused Religious in Africa: Telling the Truth).

The Togolese sister explains how a culture of extreme deference to the priest in sub-Saharan African society leads nuns to submit to whatever the priest demands "out of fear of God and out of fear of the priest who speaks in the name of God."

"What he asks, the sisters do," Lembo emphasizes. "The priest is a person of reference, a sage, a leader. He is the man of God, feared and respected."

The sister narrates how she chose clerical sex abuse of nuns as the subject of her research after nuns confided in her while she was ministering as a psychotherapist and trainer for nuns and seminarians on issues of emotional and sexual maturity.

"I said to them, 'If you are a nun, you say no! And if there was a skid, you put an end to it; you get up, and you move forward!'" the nun recollects.

Most often, the bishops support the priests.

"But I understood that their evil came from further away, that they were victims of priests who sexually assaulted them, raped them within the framework of the pastoral relationship," Lembo reveals in an interview with La Vie.

"Most often, the bishops support the priests. The laity spy on the movements of the nun; they know and say nothing. No one dares to say anything about the priest. In some communities, the superiors are not able to handle these situations," she discloses.

French documentary on sexual abuse of nuns by priests

It is always the abused nun who is blamed "for not being faithful to her commitment," Lembo tells La Croix. "Her community does not understand. All she has to do is shut up or leave."

"The sexual abuse creates confusion, and the aggressor uses blackmail, threatens to reveal everything, and it is the nun who will be fired," she adds.

While physical consequences include pregnancies, psychological consequences are equally devastating, with the abused nun facing "shame, guilt, sadness, anguish, confusion, revolt, isolation" and "the victim no longer having confidence in community and relational life."

The "spiritual consequences are abandonment of religious life, revolt against God, spiritual lukewarmness, ineffectiveness in the mission," Lembo laments. "They find it very difficult to pray, no longer want to hear about confession, no longer consider the priest as sacred."

Priests asked a superior to put sisters at their disposal for sexual favors.

"Some leave religious life but not the Church. I still hear these words from a consecrated woman who lives with her child: 'My heart is always that of a nun,'" Lembo reveals. "Darkened, the [abused nuns] live without living."

Those who remain in their convents "still feel unworthy and still under the influence of the priest" because it "takes strength to tell the abuser 'you can do whatever you want; you can blackmail me, tell whoever you want. I refuse this relationship,'" the nun observes.

Lembo illustrates the horrific levels of abuse from her interview with "Becky," who was raped several times by a coworker priest. The priest prevented the nun from using contraception and forced her to have an abortion several times. Finally, the nun left religious life.

"When I heard this testimony, I was at the beginning of my research, and I hesitated to pursue it; I was afraid for my life, for my community. I wanted to soften my words. Hearing Becky, I realized that I couldn't keep quiet. I had to continue," Lembo stressed.

Lembo's published research comes in the wake of a survey carried out by the Commission for the Care and Protection of Girls, Boys, Adolescents and Vulnerable Adults of the Latin American Confederation of Religious Men and Women.

The anonymous survey was answered by 1,417 nuns from 23 countries in Latin America and the Caribbean and published in October in a book titled Vulnerabilidad, Abusos y Cuidado en la Vida Religiosa Femenina (Vulnerability, Abuse and Care in Women's Religious Life).

In March, Church Militant reported on former nun Dr. Doris Reisinger, who was raped by a priest and has been at the forefront of the #NunsToo movement — campaigning against the sexual abuse of women religious by predator priests.

Reisinger, who entered religious life at the age of 19, says she was also solicited for sex in the confessional by Austrian theologian Fr. Hermann Geissler, a member of the Vatican's Congregation for the Doctrine of the Faith.

Young nuns who have been subjected to violence by priests are made to have an abortion.

In an academic paper, Reisinger explains how priests in Africa would consider sisters "safe" sexual partners as they feared catching AIDS from prostitutes and other sexually active women.

It is reported that "priests asked a superior to put sisters at their disposal for sexual favors. When the superior refused, the priests explained that, otherwise, they would be forced to go to the village to find women and that way they could catch AIDS," she writes.

"Anyone who has lived on the African continent for a while, or who has studied or taught theology in Rome for the past twenty years, will probably know relevant lewd jokes about African monasteries, priests and nuns, about their large number of children and their problems with contraception," Reisinger recalls.

"In view of the facts that have been known for a long time, it seems completely incomprehensible that nobody in the Church seems to be seriously interested in the suffering of the women affected, who have put themselves in the service of the Church," she laments.

Sister O'Donoghue, a medical missionary, referred to a 1988 incident in Malawi where the superior of a women's congregation was dismissed by a bishop when she complained that 29 nuns had been impregnated by diocesan priests.

Silence is enforced on these acts of violence because they are intertwined with the issue of abortion.

A year later, Sr. O'Donoghue briefed Cdl. Eduardo Martínez Somalo, then prefect of the Vatican's Congregation for the Institutes of Consecrated Life, on the study's content.

The nun noted that celibacy may have different meanings in different cultures, as in the case of a vicar general in an African diocese who insisted that "celibacy in the African context means a priest does not get married but does not mean he does not have children."

The then Vatican spokesman, Dr. Joaquin Navarro-Valls, acknowledged that "the problem is known about" but insisted it was "restricted to a certain geographical area," meaning Africa.

The Vatican shelved the report and Sr. O'Donoghue died in 2015.

Pope Francis finally acknowledged the problem in 2019, even admitting that in one case, nuns were kept as clergy sex slaves. Francis also revealed that Pope Benedict XVI was forced to shut down an entire congregation of nuns who were being abused by priests.

Lucetta Scaraffia, a Roman historian and the former editor of the Vatican women's magazine Donna Chiesa Mondo (Women Church World), wrote to Francis revealing how "widespread" sexual abuse of nuns was, as sisters increasingly shared their testimonies with her.

"Young nuns who have been subjected to violence by priests are made to have an abortion. This is what happens. And so we have a Church that is fighting abortion and then priests force nuns to have abortions," she said.

"If they make a complaint, the nuns are not even heard within the ecclesiastical institutions and are also silenced by their superiors who fear retaliation from the hierarchies," she noted. "Silence is enforced on these acts of violence because they are intertwined with the issue of abortion."

Pope Francis did "absolutely nothing" to change the situation for women in the Church, Scaraffia observed. We "talked about it on Donne Chiesa Mondo and, in fact, the monthly was then shut down."