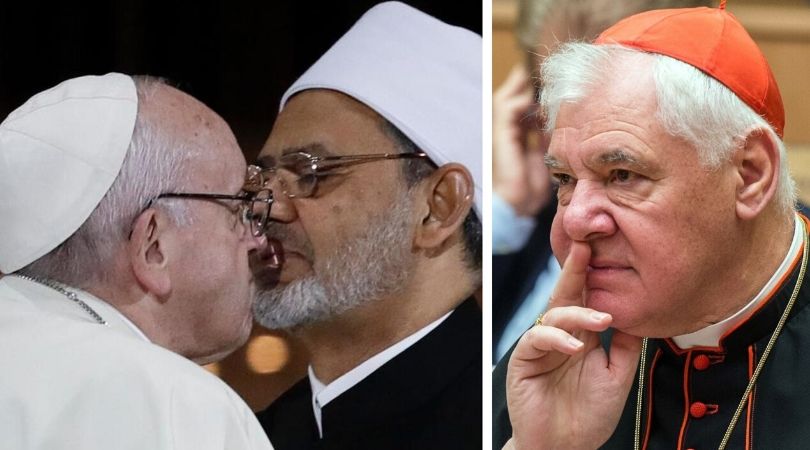 ROME (ChurchMilitant.com) - A network of Muslim converts, who face the death penalty for apostasy from Islam, are denouncing the Abu Dhabi declaration as a "deception" for "subtle but significant differences" in the Arabic text of the document.

The ex-Muslims from the Arab world are also lamenting Cdl. Gerhard Müller's naïveté after the orthodox prelate defended the covenant on Human Fraternity for World Peace and Living Together in the May-June issue of Communio.

Müller insists that the text focuses on "fundamental human rights" with "God as their originator and guarantor," because "all people are born free and equal in dignity and rights" and "human rights are based on the dignity that God himself bestowed on every human being."

In a preliminary analysis of the declaration shown to Church Militant on condition of anonymity, the Arab-speaking converts say that Cdl. Müller's reading is not based on the "Islamic theological implications of the Arabic text," and this reflects his inability to see through the "deception" and fall for the "fake human rights rhetoric."

Deception in the Details

The ex-Muslims note that the "linguistic/theological dissimulation" begins in the very first sentence of the covenant: "Faith leads a believer to see in the other a brother or sister to be supported and loved (emphasis added)."

In the Arabic version, the "believer" is the "mu'min" — an Islamic term referring only to a believer in the rigid oneness of God with a rejection of the Trinity (Tawheed) and in Muhammad. Surah 24:62 states, "The believers (mu'min) are only those who believe in Allah and His Messenger ... ."

Also, in the Arabic version, there is no mention of "sister" as the reference here is to the Muslim community (ummah) and not to the universal fraternity of all who believe in a generic God.

Again, while the declaration states: "In the name of God who has created all human beings equal in rights, duties and dignity, and who has called them to live together as brothers and sisters, to fill the earth," the converts maintain that in the Arabic version "equality" is not attributed to "human beings" but refers instead to other "beings," termed "creatures."

In Christian anthropology, humans are created in God's image and called to share God's life. Both of these notions are anathema to Islam, which considers them blasphemous.

"This is a critical distinction since in Islam there is no equality among human beings. Non-Muslims are not equal to Muslims, nor are women equal to men," a convert who practiced Islamic jurisprudence in an Arab country told Church Militant.

"'Creation' in the Koran is different from creation in the Bible," he said. "The term 'God' in English is generic, but in the Arabic version, the focus is on the Islamic God who created (a) human beings, (b) the universe and (c) other beings, termed 'creatures' — which, in Islam, also includes all non-human beings, i.e., animals, the jinn (supernatural spirits below the level of angels and demons), and satanic beings."

The Sharia scholar further observes that in the Arabic version the term for "God" in the opening sentence of the declaration is Bismillah ( باسمِ الله), which excludes all other understandings of God. It also imposes the Islamic concept of Tawheed and the rule of Allah.

"The rest of the text of this quotation is based on Surah 49:13, 'O mankind, indeed we have created you from male and female and made you peoples and tribes that you may know one another. Indeed, the most noble of you in the sight of Allah is the most pious of you ... .' Implicitly, this applies to Muslims only," he explains.

"This fitrah is an Islamic doctrine that states that all humans are created 'Muslims,' i.e., the DNA of every human is Islam, as per Surah 30:30, 'So direct your face toward the religion (Islam), inclining to truth. [Adhere to] the fitrah of Allah upon which He has created [all] mankind ... ." the expert underscores.

This 'viceregency' implies that all mankind are not equal, but it is the Muslims who will have supremacy on earth.

Furthermore, "to fill the earth" is a key Islamic doctrine of "vicegerency" according to Surah 2:30, "I will create a vicegerent on earth ... ." The Koranic term "vicegerent" is khalifah, and Surah 6:165 states: "It is He who made you the vicegerents of the earth and raised some of you in ranks over others ... ."

"This 'vicegerency' implies that all mankind are not equal, but it is the Muslims who will have supremacy on earth," the converts observe.

Müller, nevertheless, believes that the pact signed in February 2019 between Pope Francis and Grand Imam of al-Azhar Ahmad al-Tayyeb has led "neither pope nor Grand Imam to give up their own creed, which contradicts each other in terms of content and in essential questions."

The declaration "does not open the door to dogmatic and ethical relativism by dispensing with the question of truth," he insists.

"If the declaration is about equality and fraternity, and if the Islamic and Christian doctrines on both issues are mutually contradictory, it is astonishingly ill-advised and ill-considered for a prince of the Church who has thus far steadfastly stood for orthodoxy to suddenly be led astray by the standard Islamic strategy of "dissimulation" known as taqiyya," the converts warn.

"It is one thing — and it is a very big thing — to set aside or overcome historical grudges and ignorance; it is another to ascertain if the profoundly different anthropologies in Christianity and Islam meet in a common notion of a human being who possesses 'inalienable rights,'" writes academic Robert R. Reilly in The Prospects and Perils of Catholic-Muslim Dialogue.

"In Christian anthropology, humans are created in God's image and called to share God's life. Both of these notions are anathema to Islam, which considers them blasphemous," he asserts.

The network of Muslim converts is working on a detailed analysis of the Arabic text of the Abu Dhabi declaration, which they hope to submit to authorities in the Church.