Cops and the Catholic Faith 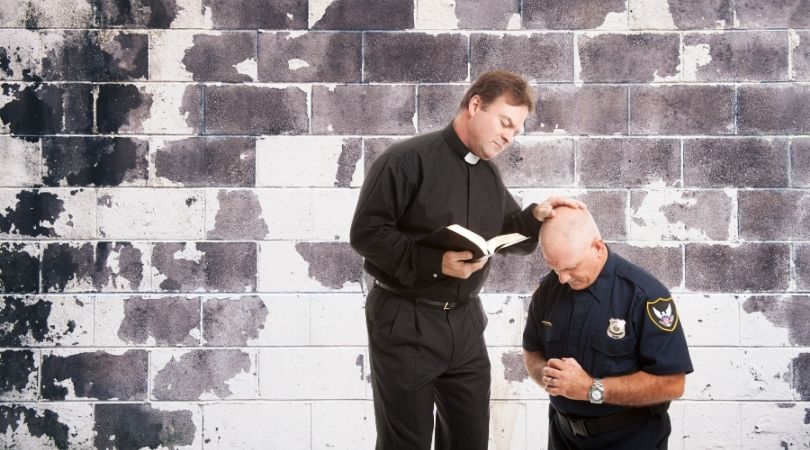 The news that the powers that be in Minneapolis have unanimously approved an increase in funding and numbers for the police force is worth noting. Previously, they had unanimously approved police reduction and defunding, in a clear example of how insane leftist politicians have become.

They oppose the police force, and when the population complains about the violence, the city council opportunistically re-approves funding for the police.

Today, it is politically correct to criticize institutions that do not tune with the orientation of the Left or play their games. Thus, while the Marxist media is complacent about the violence of BLM and Antifa, it demonstrates, at the same time, a deep dislike towards security forces that fight violence and disorder.

In the United States, violence against the police has reached disquieting levels. According to statistics provided by the FBI, 12 police officers were killed in premeditated ambushes last year, more than in the previous two years.

Most such attacks occur during traffic stops, car chases, searches or when police respond to calls and investigate suspicious activity.

Since the beginning of 2016, 45 police officers have been shot dead, and 10 others have been run over by cars.

Evidently, this climate of insecurity shakes the police. And it led the Bardstown police chief to say he wouldn't leave his gun even when he goes to the market or mows the lawn. When he takes a shower, he confessedly locks all the doors of his residence.

From the moral perspective, how should the Catholic policeman act? There are many law enforcement officers who are Catholic, and they risk their lives to protect the communities where they live and work.

From the moral perspective, how should the Catholic policeman act?

In this climate of tension and risk, the religiosity of the police officers has been of great help. It is well-known that a large number of Catholics in the United States have no human respect for expressing their Faith, like some famous sportsmen. The same can be said of police officers.

That's why there are those who, in addition to the material weapons, do not go on a mission without spiritual weapons. This is the case of Officer Sharif Said, a Catholic from Milwaukee, Wisconsin. He always carries, attached to his uniform, a medal of St. Michael the Archangel, protector of the police officers. This medal has, on its obverse, the image of St. Jude Thaddeus, patron of hope and impossible affairs.

Officer Sharif told the National Catholic Register that "his faith is the only thing that keeps him standing up to serve his community in the midst of danger." He must deal every day with cases of domestic abuse, drugs and gangs, among other things. Therefore, he says that "much of what we do is corporal and spiritual works of mercy, such as giving good advice to people with broken homes, consoling those affected by crime and even [taking part in] burying the dead."

Captain Rhett Brotherton of the Oklahoma police, also a Catholic, points out that his agents need the spiritual support of the sacraments and the ministry of the Catholic Church.

He explains that "police officers who practice their Faith and rely on the help of the Church" are generally more compassionate and live a better family life.

"Living their Faith gives them strength in the face of the temptations of cynicism and nihilism that seep into their personal lives and relationships, which can drive them away from their children," Brotherton stresses.

I definitely don't want to live in mortal sin.

Brotherton speaks of his own experience, saying, "I have noticed that frequent confession and worship of the Blessed Sacrament are fundamental points for me, so I do not become contaminated with the evil in which I am often immersed, due to my profession. I definitely don't want to live in mortal sin."

One very important thing for him in police life is when the population recognizes the sacrifice law enforcement officers make, and above all, thank them for the risks they take. This constitutes for them "little rays of light in a dark world."

Former police officer Charlie Carroll, who worked for 10 years with the New York Police Department, says that in his career he has seen many crimes that are "hard to imagine." However, he also found a lot of kindness. He sought to serve the homeless, inside or outside the bounds of his profession.

"I'm Catholic so I only treat them like Jesus would. That's what He has bequeathed to me through my career," Carroll said.

Former police officer Mark Byington, a professor of criminology at Jefferson University in Hillsboro, who has two decades of active duty experience, says the Church needs a strong ministry for police families. They experience high rates of divorce and separation, and many suffer post-traumatic stress disorder from their work.

To combat this situation, he organized, in a Jesuit house, the first "St. Michael's Retreat" for police officers on the East and West Coasts. An important aspect of this retreat was to lead the police to prove that the Catholic faith helps them to fulfill their duty as public servants and to see in their work a way to live it.

Byington concludes, "Jesus is the shepherd. But we're not the sheep. We're the sheepdogs. We are called to protect their sheep."

Have we known these aspects of police life? It is our duty of justice and charity to pray for police officers and to give them all the support we can. There is heroism in their profession.

Raymond de Souza, KHS, KM, is a knight of the Equestrian Order of the Holy Sepulcher of Jerusalem, a knight of the Sovereign and Military Order of Malta and a fourth-degree Knight of Columbus. A speaker on pro-life and apologetics issues, he is the delegate for international missions of Human Life International. He has visited 38 countries of the six continents as part of conferences held in English, French, Spanish and Portuguese and has speaking ability in Italian and Afrikaans. He is available to address Catholic audiences anywhere in the free world to defend the gospel of life and the purity of Catholic doctrine, counting on the recommendation of bishops and priests in New Zealand, Australia and the United States. He has been a radio broadcaster in New Zealand and Australia and, today, writes a syndicated column for the weekly national Catholic paper The Wanderer.
--- Campaign 32075 ---