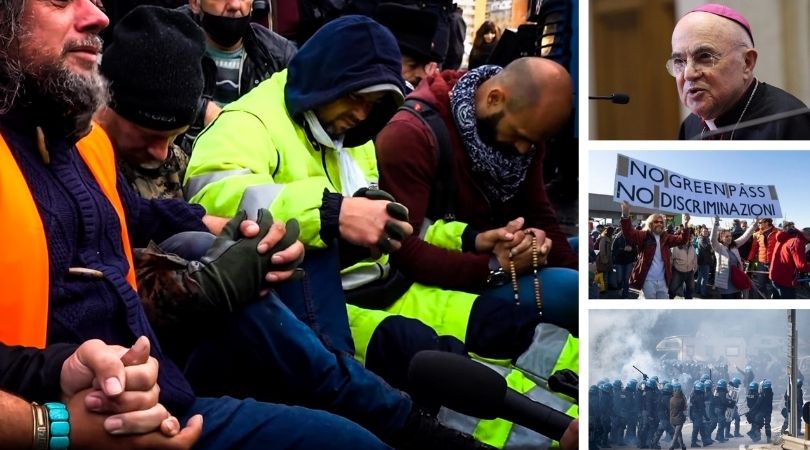 Italians at the protest slammed the indifference of bishops to the suppression of workers' rights while Vatican whistleblower Abp. Carlo Maria Viganò provided a lone voice demonstrating solidarity with dockers in a rousing address to peaceful protestors.

Viganò's address condemning the government's attempt to "enslave citizens under the pretext of a psycho-pandemic" by "coercion and blackmail" was read to hundreds of dockers who gathered in Piazza Unità d'Italia after police violently evacuated them from the port.

"Thank God, there are people like you and like many other citizens who have understood that vaccination is a pretext to put you on a permanent leash, forcing you to do what you don't want just because otherwise you can't work, travel, eat," Viganò thundered.

The only Catholic voice that is heard now by faithful Catholics and people of goodwill is that of Abp. Viganò.

Begging the crowd to refrain from violence, Viganò exhorted: "Your weapon, a terrible and very powerful weapon, must be the Holy Rosary. Invoke the Blessed Virgin, pray to her together with your loved ones, your children, and your brothers … and she will inexorably defeat our adversary."

"Pope Francis and the Italian bishops not only are silent; they are accomplices of the medical tyranny," Roberto Dal Bosco, editor of Renovatio21 told Church Militant.

The founder of the Renovatio21 group continued:

The Roman hierarchy is now the boot licker of the New World Order: Every Italian concerned with what is going on is realizing it. The Church is supporting — even, enforcing — tyranny. You live with the cognitive dissonance that the parish priest — who is telling us to get the abortion-tainted jab and obey totalitarian rules — could be your enemy.

Meanwhile, footage of dockers weeping; a pregnant woman beaten by police; tear gas rounds fired at women and children, a lower secondary school and into a baby's carriage; and demonstrators holding hands in the air to signify nonviolence, went viral across Italy.

"I am here for my three children. Sabrina, Antonio, Sofia — daddy is here for you! I am fighting for you and all the children of this planet. I will fight for you and only for you until the end. Fight, never give up," said a docker bursting into tears.

Pope Francis and the Italian bishops not only are silent; they are accomplices of the medical tyranny.

Dockers sang and danced in closed circles with locked arms facing water cannons later in the cold night. A moving scene showed a docker facing the cannon and begging the police not to fire on workers as "we are all brothers" and "we are in this together."

Faithful Catholic and mother of four Fabiana Serra, who joined dockers in solidarity and handed out Rosaries for them to pray, told Church Militant several police in riot gear downed their helmets to de-escalate the situation and show solidarity with dockers.

"A particularly moving moment was when a policeman hugged a female protestor outside Gate 4 showing the humanity of some of the cops who comforted the demonstrators. Many firefighters and police have also joined the protests," Serra said.

"A lone Polish priest was seen leading protestors in praying the Rosary," she noted. A source from Rome said the cleric was later reprimanded by his superiors.

Mainstream media and politicians attempted to smear the protestors as "fascist" and "violent." A senior civil servant told Church Militant the Draghi government was planning to send in the army to quash the dockers' revolt.

In a press statement, archbishop of Trieste Giampaolo Crepaldi expressed "growing concern" over the "evolving situation" late Monday, calling for "dialogue," "mutual listening" and a "noble and disinterested discernment."

The Church is supporting — even enforcing — tyranny.

But Roberto Dal Bosco told Church Militant "the only Catholic voice that is heard now by faithful Catholics and people of goodwill is that of Abp. Viganò."

"When the protest leader who read Viganò's message mentioned Viganò's name, the whole crowd cheered: Everyone knows Viganò, and that he speaks the truth. He alone dares to tell it all, and he isn't afraid to say that it is a spiritual, Catholic fight," Dal Bosco added.

Archbishop Viganò reminded the demonstrators: "We are all guinea pigs, the subject of mass experimentation imposed by pharmaceutical companies on their servants in institutions."

Viganò, who lives in hiding for fear of his life, preached:

They want to destroy our world, our culture, our religion, our way of living, of working, of relating to each other. We must become automatons without critical judgment, customers of their multinational corporations, underpaid slaves of their companies without rights, without protection, without social security and without freedom.

Resistance to an authority that abuses its power against the purpose for which it was established is not only legitimate, but obligatory; how necessary was the struggle against totalitarianism and against all forms of dictatorship!

The crowd cheered, shouting "Bravo!" and applauded the archbishop both at the beginning and end of his address.

Nearly 95% of the 950 dockers went on strike after the Italian government enforced its Green Pass — proof of vaccination, recovery or a negative test — on workers across the country Friday.

As truck drivers drove slowly to block traffic, dockers in the ports of Ancona, Genoa and Trieste went on strike, and thousands of protestors in dozens of cities and towns marched against the mandate. The demonstrators include those who have been fully vaccinated but are against coercion.

I am here for my three children. Sabrina, Antonio, Sofia — daddy is here for you!

The government attempted to subvert the strike by offering free COVID-19 tests to dockers. But the dockers rejected the offer because it was being made available only to them and not to teachers, hospital workers and other employees, who were also affected by the mandate.

Sources told Church Militant that undercover police were identified as stirring up sporadic acts of violence to bring the demonstrations into disrepute, including by staging an attack at the left-wing Italian General Confederation of Labor (CGIL) headquarters in Rome.

A source at Trieste port told Church Militant it was the police who had infringed international law by entering from the side of the port that is regarded as international soil to attack workers protesting on the Italian side of the gates.

Meanwhile, protestors in Ancona are blocking traffic by taking turns traversing the city's crosswalks — a legal activity that prevents their arrest.

Demonstrators are calling for the resignation of Trieste's chief of police, Leonardo Boido, for ordering the attack on peaceful protestors.

Abp. Viganò earlier addressed demonstrations against medical tyranny in Rome's Piazza del Popolo on Oct. 9 and in Turin on Oct. 15.