A Comparison of Authentic and Corrupted Catholic Masses

Many Catholics today have to suffer through corrupted Catholic Masses. I'd like to compare corrupted Masses with authentic Masses in order to demonstrate the extent of the corruption many have to suffer.

Corrupted Catholic Masses give people the impression that God is a buddy you chat with at a coffee shop, rather than the awful Creator of Heaven and Earth. In the case of some corrupted Masses I have attended, they were said outdoors at a park instead of a sacred place (contrary to Canon 932), and the congregation was dressed in t-shirts and shorts. To make matters worse, during the announcements at one of these Masses, the priest said, “I just want everyone to feel at home.”

Sadly, good intentions notwithstanding, this can be misleading, since the Holy Sacrifice of the Mass is the re-presentation of the sacrifice of Christ on the Cross, which is hardly something that should make one “feel at home.”

Even worse, instead of using a choir and an organ to lift the mind to God, corrupted Masses use acoustic and bass guitars as the preferred instruments, which often inhibit the mind from being elevated to God. Such was the case in the Mass shown above.

Authentic Masses orient everything towards God. It is for this reason that the priest, ever since the time of the Apostles, has oriented his liturgical prayer towards the East (since Christ's Second Coming will originate in the East). In corrupted Masses, the priest orients his liturgical prayer towards the people, and—assuming the tabernacle is in its traditional place—with his back facing Christ.

In authentic Masses, the individual receives Our Lord's Body, Blood, Soul, and Divinity kneeling and on the tongue in order to avoid any profanation of the sacrament. In corrupted Masses, the individual receives Christ standing and in the hand, which often leaves fragments of our Blessed Lord in the hands of the communicant, which in turn fall on the floor only to be further profaned and trampled upon.

As the saying goes, a picture is worth a thousand words. Compare your average corrupted Mass with the picture of an authentic Mass below. Which one appears more Catholic? Which one seems more reverent? Which one truly speaks to man's desire for the transcendent? 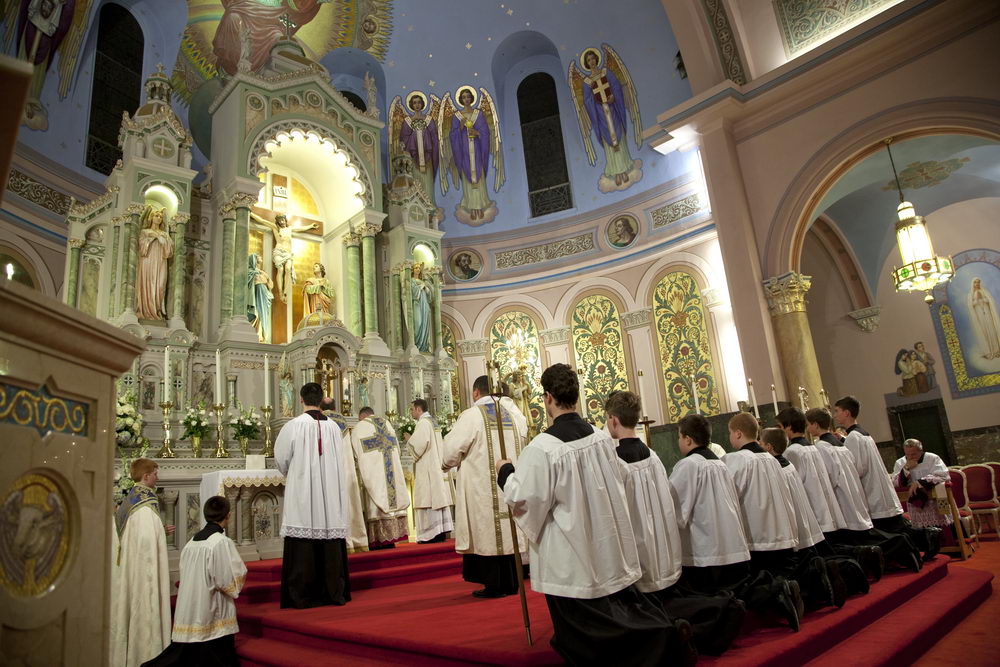