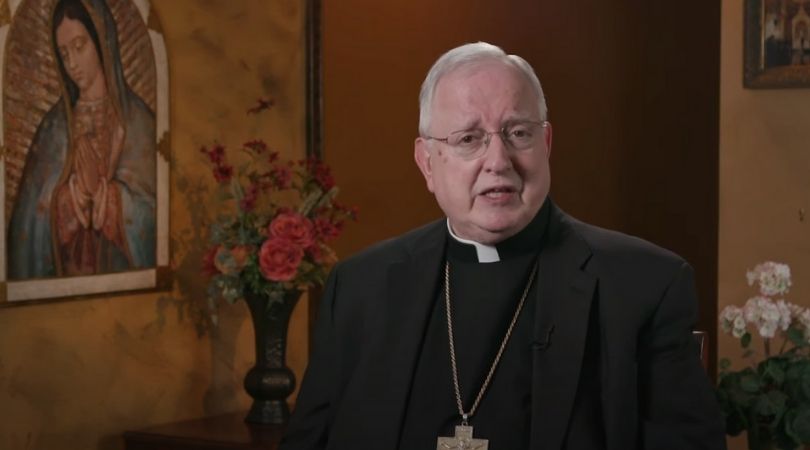 LA CROSSE, Wis. (ChurchMilitant.com) - The Wisconsin priest who took the cyberworld by storm with his homily insisting Catholics cannot be Democrats is now being castigated by his bishop.

In an official Sept. 9 "statement," Bp. William Callahan of La Crosse reprimanded Fr. James Altman for his powerful message, which has gone viral, and warned of "canonical penalties" if the priest does not heed Callahan's "fraternal correction."

"Father James Altman has become a social media phenomenon and is now a main stream media story," said the bishop. "The amount of calls and emails we are receiving at the Diocesan offices show how divisive he is."

What is "divisive" in Altman's preaching, according to Callahan, is not its content, but Altman's "approach," "delivery," and "tone."

As I review Fr. Altman's latest video statement of 30 August 2020, I understand the undeniable truth that motivates his message. When we approach issues that are contradictory to the Faith and teachings of Jesus Christ and the Catholic Church, particularly on abortion and other life issues, we should invite dialogue and heart-felt conversion to the truth. Our approach must never seek to divide, isolate and condemn.

"Unfortunately, the tone Fr. Altman offers comes off as angry and judgmental, lacking any charity and in a way that causes scandal both in the Church and in society," Callahan continued.

Fr. Altman: You Cannot Be Catholic & a Democrat. Period.

After decrying Altman's "condemnation of entire groups of people," Callahan wrote of applying Gospel principles to his correction of Altman. Ironically, in a very public statement, the bishop claimed he must first speak with Altman privately.

Callahan quoted Matthew 18:15–16 about confronting a sinner privately before reprimanding him publicly, and then he referred to canon 1341: "Before penalties are imposed, we need to ensure that fraternal correction, rebuke or other means of pastoral solicitude will not be sufficient to repair the scandal."

While the bishop of La Crosse is reprimanding Altman for preaching unfiltered truth, other bishops, priests and faithful laity are praising him.

Prior to becoming bishop, Callahan was a spiritual director at the North American College (NAC).

A graduate from the NAC had Fr. William Callahan as a mandated spiritual director at the time and told Church Militant he strongly disliked their meetings.

"He was clearly a corporate man ― a real schmoozer, who was apparently good at fundraising," he said, requesting anonymity.

"There was an air of sanctimony about him," he added. "Cdl. Timothy Dolan [then bishop of Milwaukee] rewarded Callahan for his corporate loyalty ― and probably his fundraising abilities ― by making him an auxiliary bishop."

While the bishop of La Crosse is reprimanding Altman for preaching unfiltered truth, other bishops, priests and faithful laity are praising him.

Bishop Joseph Strickland of Tyler, Texas has publicly endorsed Altman's message. In a Sept. 5 tweet, Strickland humbly and clearly wrote: "As the Bishop of Tyler I endorse Fr Altman's statement in this video. My shame is that it has taken me so long. Thank you Fr Altman for your COURAGE. If you love Jesus & His Church & this nation ... please HEED THIS MESSAGE."

Strickland also posted a video of his own on faithful citizenship and voting titled The Pre-eminent Moral Mandate: the Right to Life, where he is interviewed by Dcn. Keith Fournier.

2nd in a series of videos seeking to guide us as we make critical decisions in November. As always we must pray first but we must also act according to the truthGod has revealed to us https://t.co/M4ZoqeUfUk

If you know which candidate and party want to promote and expand abortion, and still you intend to enable them to continue their war on the unborn with the help of your vote, then it is my duty as a priest to tell you that your soul will be in grave danger, especially if you present yourself for Holy Communion after casting such a vote with the full knowledge of what you're doing.

In one of his posts, Heilman sounded off on the importance of giving support to people like Altman:

Much like the arrest of Jesus, ten of the twelve first bishops took off running in silent self-protection. At a critical point, when Jesus could have used the support of his Apostles, they fled. Just one remained with Him at the cross: John the Beloved. We need more John the Beloveds; more Mother Angelicas; more Fr. James Altmans.

In this most critical time, possibly in all of salvation history, I stand behind Fr. James Altman and, like Mother Angelica, his brutal honesty, even when it comes to the bishops. Do we just sit by and allow our flock to be taken control by the culture of death; culture of violence; culture of hedonism; culture of oppression? NO!

Heilman urged the faithful to action, exhorting, "The time is now for ALL OF US, most especially priests and bishops, to refuse to allow Satan and his minions to seize control!"

The time is now for ALL OF US, most especially priests and bishops, to refuse to allow Satan and his minions to seize control!

There is no word yet on Altman's response to Callahan's reprimand.

Church Militant has reported on the influences of Marxism, communism and money that have led members of the Catholic hierarchy to adopt anti-Catholic positions on highly charged religious and political issues.

Regardless of how the verbal sparring plays out, observers note this struggle for truth and battle for souls will be prominent and public in the lead-up to Election Day and beyond.