COVINGTON, Ky. (ChurchMilitant.com) - The Covington Catholic student smeared by the mainstream media is suing The Washington Post for $250 million.

President Trump celebrated news of the lawsuit on Twitter Wednesday, saying, "Go get them, Nick."

The text of the lawsuit states:

The Post wrongfully targeted and bullied Nicholas because he was the white, Catholic student wearing a red 'Make America Great Again' souvenir cap on a school field trip to the January 18 March for Life in Washington, D.C. when he was unexpectedly and suddenly confronted by Nathan Phillips ('Phillips'), a known Native American activist.

The lawsuit slams The Washington Post, saying, "The Post bullied an innocent child with an absolute disregard for the pain and destruction its attacks would cause to his life."

It adds, "The Post proved itself to be a loud and aggressive bully with a bully pulpit."

Sandmann's legal counsel argues that The Washington Post ran with false stories that "conveyed that Nicholas engaged in acts of racism by 'swarming' Phillips, 'blocking' his exit away from the students, and otherwise engaging in racist misconduct."

"The Post ignored basic journalist standards," the legal team argues, "because it wanted to advance its well-known and easily documented, biased agenda against President Donald J. Trump ... by impugning individuals perceived to be supporters of the President."

The text of the lawsuit further argues that Sandmann did nothing to threaten Phillips — debunking claims that Phillips was intimidated by him.

"Nicholas is 16-years of age, is 5'9" in height and weighs 115 pounds," it notes. The document also states that Sandmann "did not confront Phillips," "did not move toward Phillips" and "did not make any movement to block Phillips' path or prevent Phillips from physically moving wherever he wished."

It continues, "Nicholas was startled and confused by the actions of Phillips in singling him out and confronting him."

The document explains that the suit is for $250 million because it is "the amount Jeff Bezos, the world's richest person, paid in cash for the Post when his company, Nash Holdings, purchased the newspaper in 2013."

The Post wrongfully targeted and bullied Nicholas because he was the white, Catholic student wearing a red 'Make America Great Again' souvenir cap on a school field trip to the January 18 March for Life.

The Washington Post plans on fighting back hard against the lawsuit. A representative of the company told Cincinnati-area news outlet WLWT News 5 in an email, "We are reviewing a copy of the lawsuit and we plan to mount a vigorous defense."

One part of the suit mentions the independent investigation paid for by the Covington diocese that came out last week. That investigation essentially exonerated Sandmann and the other students who were in the crowd outside the Lincoln Memorial when Phillips and other Native American activists approached and confronted them.

After the Jan. 18 encounter outside the Lincoln Memorial, deceptively edited video clips were shared online that seemed to show the pro-life high schoolers surrounding and mocking a Native American.

Pro-life leaders and Catholic bishops were quick to get in front of the firestorm, throwing the Catholic teenagers under the bus within a day or two of the incident.

But more complete video of the incident soon surfaced online that completely undermined the mainstream media narrative. Video evidence shows a hate group called the Black Hebrew Israelites shouting insults, profanities and threats at the pro-life teenagers. It also shows Phillips and other Native Americans coming from the Indigenous Peoples' March approaching the pro-life teenagers and Phillips freely approaching Sandmann to beat the drum in his face.

The teens seemed to think Phillips was joining them in their school cheers — which they were doing to drown out the insults from the Black Hebrew Israelites.

One of Phillips' companions is on video cussing and yelling at a teenager, telling him white people don't belong in the Americas and saying, "Get the f*** out of my face with that s***."

The high school boy argued back for a bit, but Sandmann gestured to him to stop talking.

All of this contradicts Phillips' testimony to the mainstream media. Phillips had claimed that the teens surrounded him and that Sandmann instigated the encounter. He also claimed they chanted "Build the wall," but not a single video shows the pro-lifers saying that. But video does show the Black Hebrew Israelites shouting about President Trump's pledge to build a border wall. 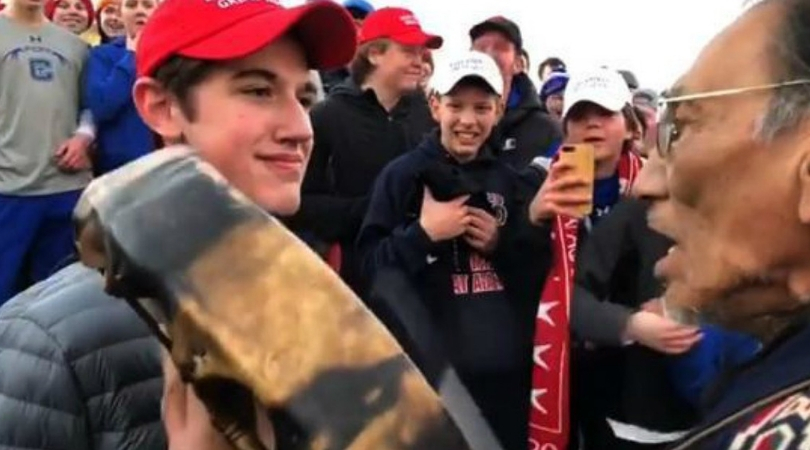